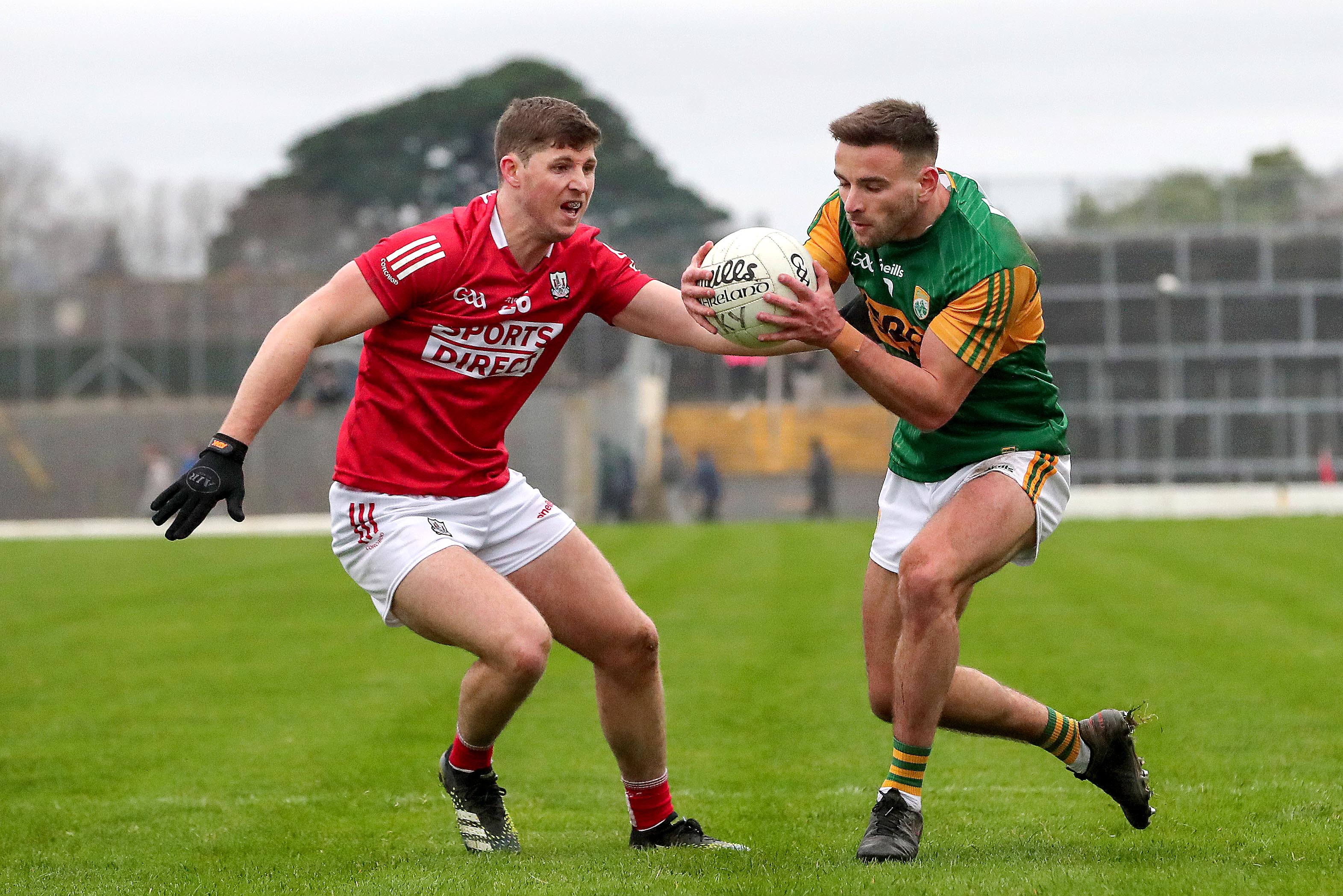 Cork's Kevin Crowley and Micheál Burns of Kerry in action during the McGrath Cup Final at Fitzgerald Stadium, Killarney, in January. INPHO/BRYAN KEANE

Cork’s Munster senior football semi-final against Kerry will be played at Fitzgerald Stadium, Killarney on Saturday, May 7, with a 6pm throw-in. The game was moved from Pairc Ui Chaoimh to Pairc Ui Rinn due to two Ed Sheeran concerts at the Ballintemple venue on April 28 and 29. It was thought that nearby Pairc Ui Rinn could hold 15,000 spectators, but following a health and safety inspection the capacity of the ground formerly known as Flower Lodge, was reduced to 9,200. With some remedial work the capacity could be increased to 11,000. However, the Munster GAA council looked at average attendances at recent Cork vs Kerry Munster Championship games in Cork and found that they were over 22,000. So the semi-final has now been switched to Killarney and with an ongoing home and away arrangement working very well between both counties the next two Munster football championship games between these great Munster rivals will be played at Pairc Ui Chaoimh.

And there is speculation that both of this year’s Leinster football semi-finals could be moved out of Croke Park. Leinster chairman Pat Teehan said: “We are looking at the strong possibility we won’t have Dublin in Croke Park for the Leinster semi-final. We didn’t make a decision on it at the time of the draw because semi-final pairings won’t be known until the first week in May, but the likelihood is that we will consider that move. It would be better to have 20,000 in Portlaoise, Tullamore or Nowlan Park than 30,000 in Croke Park.” If that happens it will be the first time since 1996, when Dublin beat Louth in Navan, that the Dubs would not play a Leinster football semi-final at Croke Park. Dublin will be bidding for their 12th Leinster title in-a-row this year. Leinster football teams are struggling right now and next year the province won’t have a team in Division One of the National Football League for the first time ever. While the League has had different formats over the years, there has always been at least one Leinster county in the top flight. However, that proud record went 10 days ago when Dublin and Kildare were both relegated on a dramatic final day of League action.

RACHAEL HEADS BACK TO AINTREE

Rachael Blackmore was the toast of Aintree last April when she became the first female jockey to win the world’s most famous race on Minella Times. Twelve months ago the Tipperary-born jockey went to the famous Liverpool track after being crowned top jockey at the Cheltenham National Hunt Festival. Rachael was not the top jockey at Cheltenham last month, but she did win the two biggest races at the Festival, the Champion Hurdle and the Gold Cup. Now she will be bidding to win the Grand National for the second year-in-a-row. It’s difficult to win any big race in consecutive years on the same horse, but the Grand National is really a lottery. Minella Times must carry 15 pounds more this time which goes some way to explaining why Blackmore’s mount is a 20-1 chance to win again.

Trainer Henry de Bromhead said: ‘‘Minella Times has been a little bit disappointing this year, but he seems to be coming back to himself, so we are hoping he is coming into form. Unfortunately, Balko des Flos, the 2021 runner-up, won’t be going to Aintree this year, but we have got plenty of others including Chris’s Dream and Court Maid.”

J.P. McManus is the owner of Minella Times and the Limerick millionaire also owns the Ted Walsh trained Any Second Now, who is currently the favorite for the big race on Saturday at 8/1.  With owner Michael O’Leary unhappy with the handicappers’ rating for Tiger Roll, who will not run, trainer Gordon Elliott will be hoping another of O’Leary’s horses’ Delta Work could give the pair another Grand National win. Tiger Roll with Davy Russell up, won the Grand National in 2018 and 2019; there was no race in 2020 due to the coronavirus and Rachael won last year. So it has been all Irish winners at Aintree in recent years.

MCCARTHY RULED OUT OF QUALIFIERS

Republic of Ireland defender Savannah McCarthy has suffered a cruciate ligament knee injury that rules her out of the World Cup qualifiers against Sweden and Georgia. The 24-year-old sustained the injury playing for Galway United in the Women’s National League. The Swedes, who are ranked No 2 in the world, have won all five of their games in Group A and are eight points ahead of second-placed Ireland, who have a game in hand. If Sweden beat Georgia tomorrow (April 7), they will know that victory against the Irish at the 18,000-capacity Gamla Ullevi Stadium on April 12 will send them to the World Cup. For Vera Pauw’s team, second spot and a play-off berth has always been the target. After Sweden the Irish women have a trip to Georgia in June before massive September games against Finland in Tallaght Stadium and Slovakia in Bratislava.

UNDER-21 SIDE BEATS SWEDEN

The Republic of Ireland men’s under 21 team beat Sweden 2-0 in Boras last week, a win which has given them in a good chance of getting second place in their group. Italy look likely to qualify automatically from Group F with 17 points, Sweden are second with 14, but Jim Crawford’s Irish team are now third on 13 points and with a game in hand on Sweden. The Swedes finish with their campaign in June away to Luxembourg and home to Italy. Meanwhile the Republic have three games in June, home to Bosnia-Herzegovina and Montenegro and away to Italy. The goal scorers in Boras last week were Ross Tierney and Tyreik Wright.

MICK ‘DIDN’T HEAR BACK’ ON VACANCY

Former Irish manager Mick McCarthy says he eager to return to football and add to his tally of over 1,000 matches as a professional football manager. In a recent Podcast Mick said he didn’t not hear back from Sunderland having applied for the role following the sacking of Lee Johnson earlier this year. McCarthy departed Cardiff City in October last year, and had been linked with the vacancy at Sunderland in early February. Among McCarthy’s competitors for the role was Roy Keane, who met with Sunderland representatives before deciding not to take the job. McCarthy said. ‘‘I applied for it this time around. I said I would I take it to the end of the season, but I didn’t even get a call back. I have not retired. Maybe the game has retired me but I have not retired. If something came up that really interested me I would take it. That Sunderland job would have done to the end of the season. I think they offered it to a few people to the end of the season. Others wanted longer contracts. It’s such a big club and get them promoted and back into the Championship would be brilliant.’’

HUGHTON’S GHANA THROUGH TO FINALS

Last week Ghana became the first African country to qualify for the World Cup finals in Qatar next November. Ghana, where former Irish international Chris Hughton was recently appointed Technical Advisor, held Nigeria to a 1-1 draw in Abuja on Tuesday of last week and qualified for the final on the away goals rule. Hughton’s father was a native of Ghana and his mother hailed from Limerick. However, reactions from the home fans in and around the Moshood Abiola Stadium blighted the second leg of the play-off. Most of the vociferous crowd in Abuja had expected Nigeria to qualify for the World Cup after the first leg of their playoff ended 0-0 in Ghana the previous Friday. But goalkeeper Uzoho’s error allowed Partey to open the scoring for Ghana early in the second leg. Troost-Ekong levelled from the penalty spot. Nigeria missed several chances to win the game. There had been signs of trouble before the game as crushes had built up outside the 60,000-capacity stadium an hour before kick-off, with thousands of ticketless fans approaching different gates. Supporters with executive and VIP tickets which cost 25,000 naira ($60) were locked out and unable to enter the stadium before kick-off. Some officials with state box tickets were shocked as state police prevented them from going inside the stadium.

There were suggestions at a public meeting that members and clubs in the Waterford Gaelic Football Association were being “treated like second-hand citizens” on a gender-based approach, by a predominantly male council. Plans by Waterford Gaelic Football Association (WLGFA) to develop a €6m sports complex have been thrown into uncertainty after it emerged the local authority may de-zone a nearby residential site on which the development is dependent. Last year Waterford became the first ladies Gaelic football body to own its own grounds, when it purchased a €330,000, 16-acre site at Ballinroad, near Dungarvan.

Fine Gael senator Micheál Carrigy has apologized to Robbie Keane for issuing an “inaccurate and false” press release regarding Keane's contract with the FAI. Keane was employed on a four-year contract when Mick McCarthy was hired as manager in a two-year deal manager in 2018, but Keane has not had an official role within the association since April 2020, despite a €250,000 salary. Last week Carrigy called for Keane to donate his FAI salary since leaving his assistant coach role to grassroots clubs, describing it incorrectly as ‘‘over half a million euro from the taxpayer for very little work.’’ A few days later, Carrigy said: ‘‘I have since learned that the information contained in this release was inaccurate and false in a number of respects and was unfair. As a result, I have withdrawn the press release and apologize to Robbie for any damage caused.’’

Popular television presenter Jeff Stelling will not be stepping away from “Soccer Saturday,” after all, as Sky Sports confirmed last week that the veteran host had changed his mind and is staying. The long-time master at the helm of the Sky Sports show previously said that he would be retiring from the role at the end of the current season. Stelling has spent 25 years hosting the live score programme but decided to make the ‘incredibly difficult decision’ to finally walk away. Four months on from that difficult decision, the 67-year-old has changed his mind and will instead remain on as the host. Stelling said: ‘‘Sky Sports is my home and the Soccer Saturday team are a big part of my life. I am thrilled to be staying, and excited about moving the show forward and creating more special Saturday afternoons on Sky Sports.’’ Sky Sports managing director, Jonathon Licht also expressed his delight that Stelling, a life-long Hartlepool United fan is staying on.