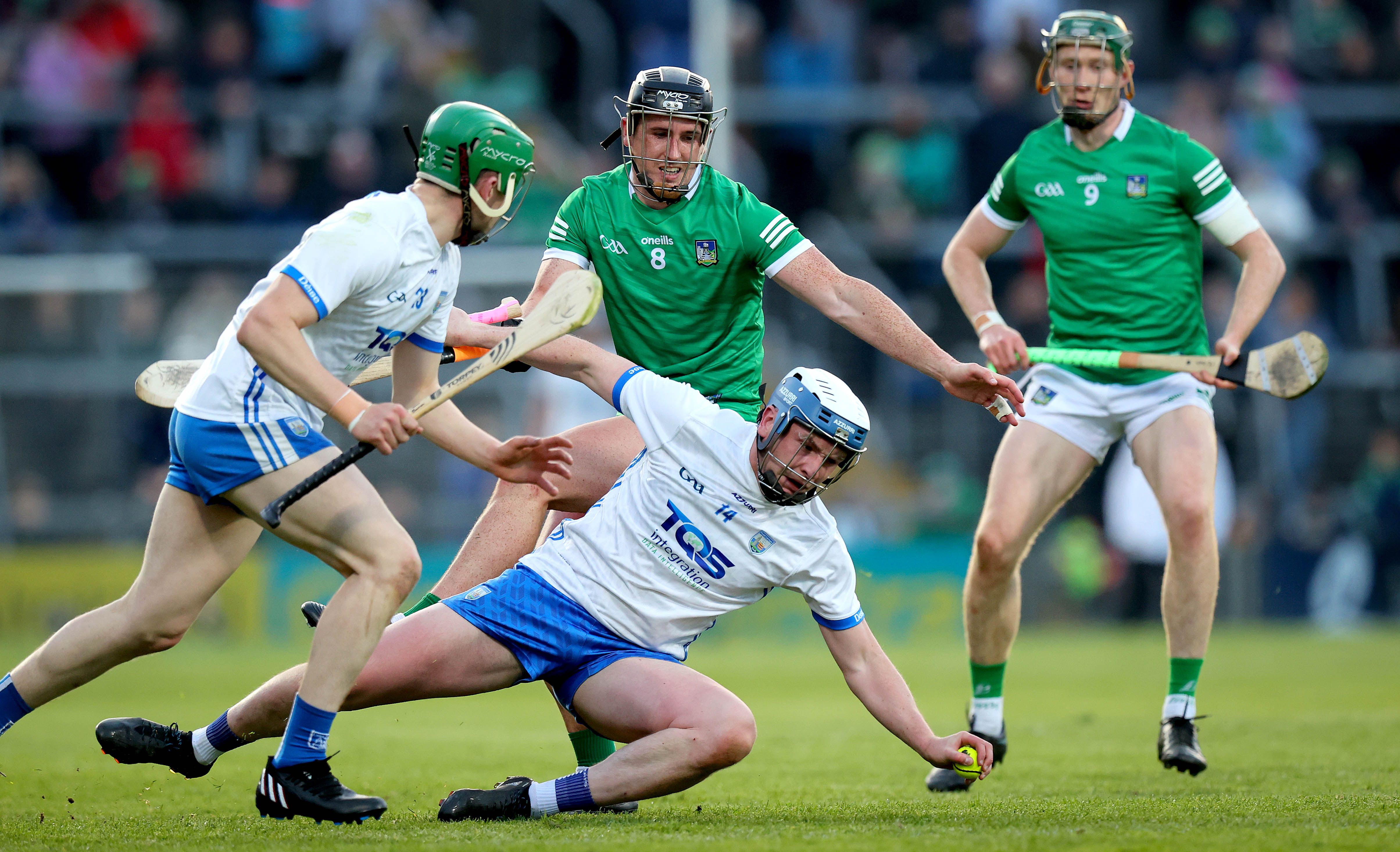 Was this a dress rehearsal for this year’s Munster and All Ireland finals? If so, then we can only hope to drink from this hurling fountain more often as these two teams are bringing us the sweetest nectar to our palettes.

There is a perfect plot brewing as Limerick manager John Kiely  goes for three in a row and four in five years off Liam MacCarthy cups while Deise boss Liam Cahill is learning on the hoof as he tries to bring Liam back to Waterford for the first time since 1959.

And while Kilkenny and Galway might suggest otherwise this Sunday when they meet, and while Clare can’t be totally ruled out of the running, most people see this year’s hurling prize as a two-horse race.

You have to hand it to Limerick, missing four or five key players including Cian Lynch, who picked up a hamstring injury early on  in Saturday night’s encounter.  They still refused to yield even when their fiercest opponents came at them with two late goals through Stephen Bennett and Jack Prendergast to cut their lead to a single point.

There was no late drama, though, as Kiely’s warriors regrouped and shot the key scores to end up winning by three points.

Said a delighted Kiely afterwards: “It was one of those crackers. It ebbed and flowed. Waterford brought a fantastic challenge. We put a daylight between ourselves and Waterford with 10 minutes to go but then they popped up with a couple of goals and all of a sudden the game was back on the table again.

“One would have thought the momentum had turned completely to Waterford but we dug in, won some dirty balls and kept our composure. We used the ball well and still created the last four scoring chances in the game. We might not have converted them all but we did create them and very happy with that,” he stressed.

In reference to hurler of the year Lynch, he explained: “It's a hamstring injury. How severe it is we don’t know, we’ll have to get him scanned on Monday. He’ll be out of training for a couple of weeks I would imagine but we’ll have to wait and see.”

From Waterford’s viewpoint, Liam Cahill said he was “disappointed not to get something out of the match. These players in Waterford don’t give up easily and credit to them, they hurled right to the death. We’ll have a lot of learnings tonight that we’ll have to improve on if we’re to have any chance of progressing in the championship.”

Where specifically? He added: “That middle third of the field, we didn’t seem to get our fair share of return there at a vital stage. We’ll work on that and trying to improve our decision-making as we go forward.”

Waterford began the better but were backed by a strong breeze in the first half  when Mikey Kiely shot was somehow diverted by Barry Nash when a goal seemed certain.

With Iarlaith Daly doing a good marking job on Aaron Gillane and Lynch forced off, it looked as if this could be a night of upset. However, the sporting gods equalled the disadvantage when Daly went over on his ankle and had to be replaced. That change signalled an inspired rest of game performance from Gillane who ultimately was the difference between the sides with his ability to get out in front and slot over points.

Limerick’s Diarmaid Byrnes also stood tall with a number of scores to bring his team back into it and by the interval, they not only had drawn level but forged one ahead on a 0-14 to 0-13 scoreline thanks to a Gillane glorious shot from way out left.

It was even-Steven for a good while but you sensed that Limerick had come to terms with what Waterford had thrown at them and were now in cruise control as they headed for home seven points to the good.

However, Bennett’s low 20-metre free wasn’t hit hard but it squeezed in at the post on 63 minutes to give the game new life. This was added to considerably some  90 seconds later when Prendergast finished off a great move of hard running right at the heart of the winners’ defence to shoot past a helpless Nickie Quaid.

The game was there for the taking. Who had the desire to go for it? Limerick was the answer as sub Pat Ryan and yet another from the impressive Byrnes showed all watchers that they won’t be given any silverware back without a mighty fight over the coming few months.

The scoreboard doesn’t do justice to the chasm in class and desire that was clearly evident between Clare and Tipp at Semple Stadium on Sunday.

Defeated manager Colm Bonnar arguably got closest to the truth of the outcome when he said his Tipp crew had been eaten up by a “ravenous” Banner team sent out by Brian Lohan to hurl as if their lives depended on the outcome.

Lohan was delighted that the path to victory was laid with three first half goals but it was the slickness, intelligence and intensity of the combined play which blew Tipp away in their own back yard.

Bonnar was still suffering from the shock of the Clare power game afterwards when he tried to assess what had happened. “To play your home game and go in at half-time 13 points down, 3-11 to 0-7… We were unlucky with a couple of scores, could have had a goal or two at the start of the first half to keep us with Clare, but once they got the momentum, they were ravenous,” he admitted candidly.

He went on: “They attacked everything and were so hungry for the breaking ball. They brought a big game with them and we found it very hard to contain it. We regrouped in the second half and came at them, scored 2-9 to 0-10 but 13 points was a big deficit.

“When we got the goal it was a tonic for us. We did have a goal chance or two that would have given us a bit of momentum but overall we can have no complaints. Clare were the better team."

There was no real secret as to why Clare played so well. The return of former All Ireland winning hero Shane O'Donnell and the multi-gifted Peter Duggan to the starting forwards  made a huge difference in terms of ball outlet and with John Conlan manning the defense but also adding his assist to one of the goals, they were a different outfit than the previous Clare teams we have seen of late.

Tipp’s goose is almost cooked for the year after two defeats to Waterford and Clare with the prospect of keeping their hopes alive by visiting the Gaelic Grounds to face Limerick.

“We have to bring a bigger fight than we brought today. This is a big learning thing for us. We just weren’t at their level initially but we have to learn from it and regroup because we’re going down to the Gaelic Grounds in our next game. We don’t have time to sit and feel sorry for ourselves,” insisted Bonnar, who if nothing else, speaks with a refreshing honesty about his team’s situation.

Goals win matches they say and when Ian Galvin, Duggan and Tony Kelly  per a penalty helped Clare to a 13-points interval advantage, it was already game over though sub Ger Browne’s goal immediately after the break offered a glimmer of hope which was quickly extinguished due to a number of bad wides that followed. Even when Barry Heffernan  got the jammiest of green flags  as the sliotar slipped through Eabhan Quilligan’s hand, it was more a measure of consolation rather than a real hope of  recovery.