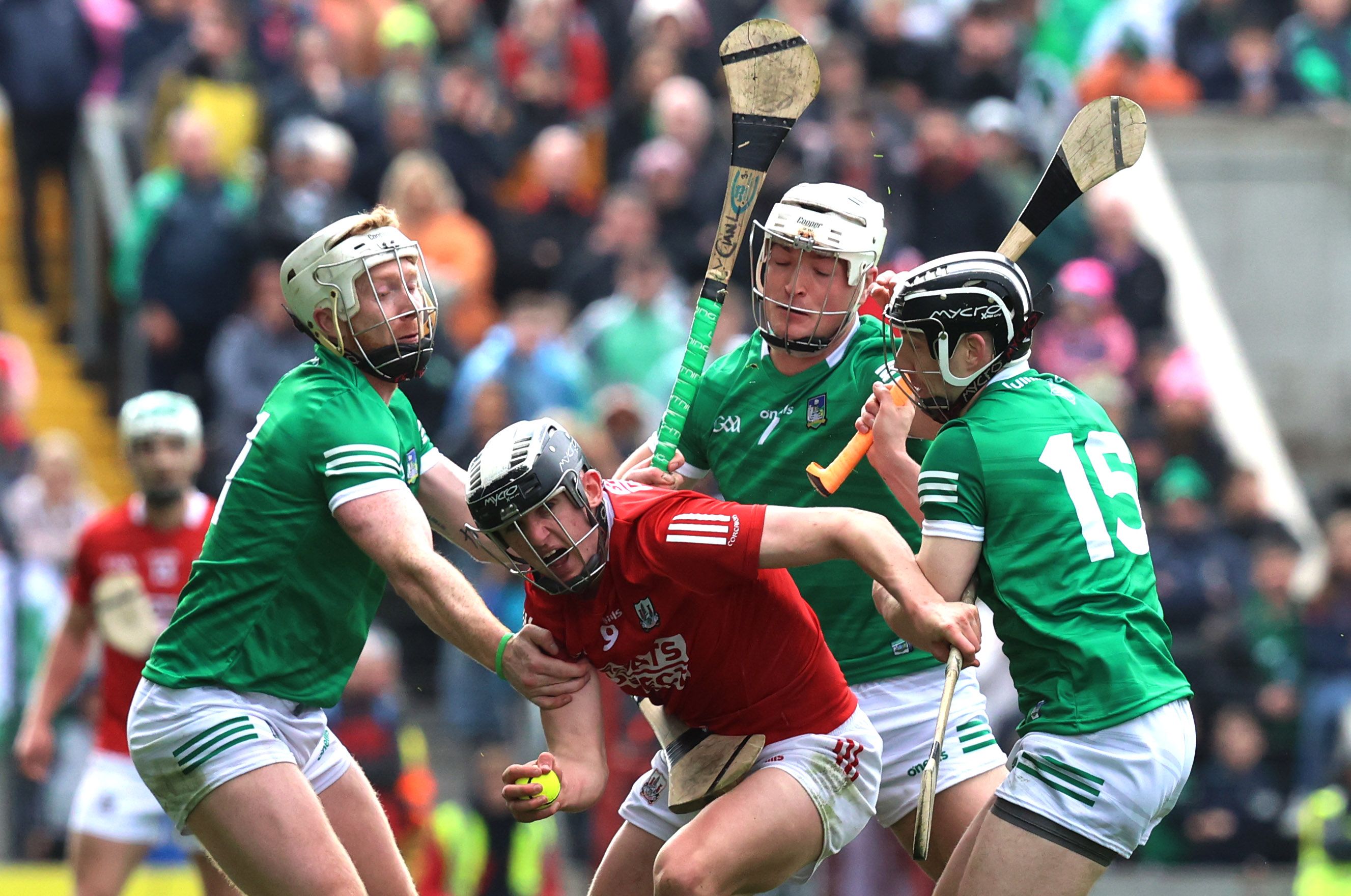 Limerick on a different hurling planet

As sure as death and taxes, Limerick will win this year’s All Ireland hurling final and annex the Liam MacCarthy Cup for the third year in a row. So move on then, nothing really meaningful to see despite all these round-robin fixtures ahead.

Cork were humiliated in the All Ireland final in Croke Park last year by John Kiely’s men and in their own bailiwick of Pairc Ui Chaoimh, they were  almost as far off the pace in this 11-point drubbing which included the present of a Cork goal after 12 seconds delivered to Shane Kingston.

Quite simply, Limerick are hurling from a different planet than the current Rebels and when you factor in how ordinary Tipp made the next best team, Waterford. look for long tracts on Sunday, then who else is there to put it up to the Shannonsiders?

On the evidence of their collapse to a draw against Wexford on Saturday evening, Galway, even with the divine intervention of Henry Shefflin, are nowhere near the required level of intensity or understanding of what is required to win big titles nowadays.

Which leave Kilkenny. Yes they huffed and puffed against Westmeath before firing home half a dozen goals at Cusack Park, Mullingar, on Saturday but with Brian Cody on their sideline, they are the one side you can be sure will die with their boots on to win each and every game they play.

Yes, they were not good enough to beat Cork in the league semi-final a month ago, but last weekend saw the reintroduction of T.J. Reid to their ranks after a spring of club hurling only.

Put him into the mix and the high-octane occasion of a Croke Park battle, and maybe they are the one team that could defy Kiely’s three in a row ambitions.

Cork got the tonic of  that Kingston goal and the big home fan base felt maybe this was the day when their team of nearly men would come good. Limerick didn’t helped their own cause by shooting a number of wides they would normally put over with their eyes close but you knew that as the minutes ticked by, they were working out how to catch out the hosts.

They were helped in large measure by Rebel naivety as Kyle Hayes and Aaron Gillane  were given the freedom of half a pitch to cut in for two  first-half goals which ended the game as a contest. The champs still weren’t firing on all cylinders but when you consider they landed 16 points to five from Cork in the last half-hour, you get an idea of how truly in command they were.

We will know more by this time next week when they face Waterford but my view is they will be the better for running the rust of this week. Hopefully we will be able to say the same about their opponents but Cork look like a team that have too many players not able to climb to the standard required to keep in touch with the modern day requirements of athleticism, intelligence and skill levels to score from obtuse angles when the occasion demands.

As League champions, it was a case of “uneasy lies the head that wears a crown” for Waterford as they welcomed unfancied Tipperary to their own Walsh Park back yard on Sunday.

And like Shakespeare had predicted all those years ago, it was an uncomfortable  accoutrement because Colm Bonnar’s men gave them no respect for recent won silverware and instead tore into them as if it was their divine right to win such Munster confrontations.

With four newcomers in their ranks, Tipp defied their own league form to play out of their skins and in the end it took the introduction of All stars Austin Gleeson and Jamie Barron and the brace of points they each imported into the game with them to carve out a four-point winning margin.

It meant the experts had a rethink on what they witnessed first-hand and said Waterford will again be close but with no cigar while Tipp just might grow as the campaign progresses.

The loss of Seamus Callanan as an attacking fulcrum was always going to be felt but the fact that his direct replacement Mark Kehoe notched two goals was a sign that there is plenty of good young players coming through for the blue and gold.

But Tipp full-forward Mark Kehoe sent the blue and gold flags flying high when finding the net after seven minutes, totally shifting the game’s momentum in the process.

No one ever thought for one minute that Waterford were going to lie down after that and they didn’t. They have too much class and with 1-10 to his name Stephen Bennett is becoming a Deise force of nature with Dessie Hutchinson’s opportunism causing all sorts of marking problems for last line defenders.

Noel McGrath has been that sort of thorn to defenses for over a decade now and once again he orchestrated moves and took scores from play as if he was just a young lad out in the park.

With Waterford training by  1-12 to 0-11 at the break, you knew that Liam Cahill would fire in his two All Stars.

And  Michael Kiely, who had been unlucky not to get in for a few goals in the first half, put things right early on after the changeover by  grabbing his first  championship goal.  That settled the winners and with Barron announcing his entrance with a point, the game took a different twist. A seven point swing at this stage was the deciding moment though Tipp tried to fight back. It was successful up to a point – and that came with Hutchinson’s goal which came after a great pass from Kiely.

Tipp still didn’t die but they didn’t do enough either to truly re-enter the contest. Neither will be happy with the performance, but Waterford will take the result and move on.

Shefflin unhappy at soft way Wexford get off  hook

Why neither of these teams are likely to figure at the business end of hurling affairs this year can be easily encapsulated in the two halves of this first round Leinster championship game at Wexford Park on Saturday.

For the opening 35 minutes, Henry Shefflin’s Western charges played with a slickness, passion and pattern that made those looking in take notice that he might be bringing his own playing and managing alchemy to work across the Shannon.

Six points to the good but dominant all over, they looked like they were going to give this year’s Liam McCarthy Cup run a right old rattle.

On top of a league semi-final drubbing by Waterford three weeks ago, Model Boss Darragh Egan gave a half-time talk that obviously carried plenty of now-or-never  ultimatum  language contained in it.

Whatever happened, it was as if the teams swopped jerseys for now it was the Wexford lads who were fighting tooth and nail for every cause while the Tribesmen inexplicably faded onto the backfoot like a retreating army.

Even so, with times almost up, Shefflin’s men had managed to keep the scoreboard ticking over sufficiently to stay four points ahead.

What followed from the introduction of Lee Chin acted as a clarion call both to his teammates and the big home following as they went about whittling down the lead.  In such circumstances, it is perhaps natural that officials give decisions more in favour of the home team than the visitors. And certainly a man with a less milder disposition than the Ballyhale resident might have had a right lash at the referee afterwards. Instead, he kept his criticism to the inoffensive side of  probably what was his honest verdict.

While putting his hand up to acknowledge the poor performance of his side in the second half, he said that maybe they also came out the wrong side of a number of calls by referee Thomas Walsh.

By then Chin had split the post with a soft enough 7th minute injury time free from half way as part  Wexford getting the last four points to garner a barely deserved draw.

Conor McDonald's 63rd minute goal from an acute angle had made the outcome of a late comeback possible but that then seemed to have vanished when two minutes into injury time, Conor Cooney prepared to take a free which would have put the Galwaymen three points to the good. Instead, Walsh penalized  him for deliberating too long over it as a time-wasting experience. From the resultant throw ball, Chin gathered possession and landed a magnificent score to cut the lead to the minimum.

Speaking on radio after the game, Shefflin said: “You talk about home advantage in the competition, the moment Conor got the free, I could sense the crowd were on his back and he made his decision which I felt was harsh. Overall in the second half, I don’t know what the free count was, but it definitely seemed to go against us."

He added: "It’s a cliché unfortunately, it was a game of two halves. We played well in the first half, but went completely out of it in the second period.

"We weren’t playing that well in the second half, but we were still holding them off, six ahead with 10 minutes to go. The match was in our grasp. Wexford to be fair used their bench well, definitely made an impact and the tide was turning against us. There’s disappointment in the dressing room. It should hurt."

This weekend should tell us where Wexford are as they welcome Dublin on Saturday while Galway are home to Westmeath and will be able to afford a much changed team knowing that victory is all but assured.

Tyrone got the first leg of the defense of their Ulster and All Ireland titles off to a successful start despite Fermanagh putting it up to them at Brewster Park on Saturday before emerging victorious by 2-17 to 2-10.

Goals by Conor Meyler and Liam Rafferty were the key score in a game where the men in green matched their more illustrious opponents for long stretches but lacked the little know-how required to win such tight encounters.

The real heroes of the weekend were the two Exile teams of New York and London who both put up tremendous displays before falling by narrow margins to  Sligo and Leitrim respectively.