Home Letting the art do the talking 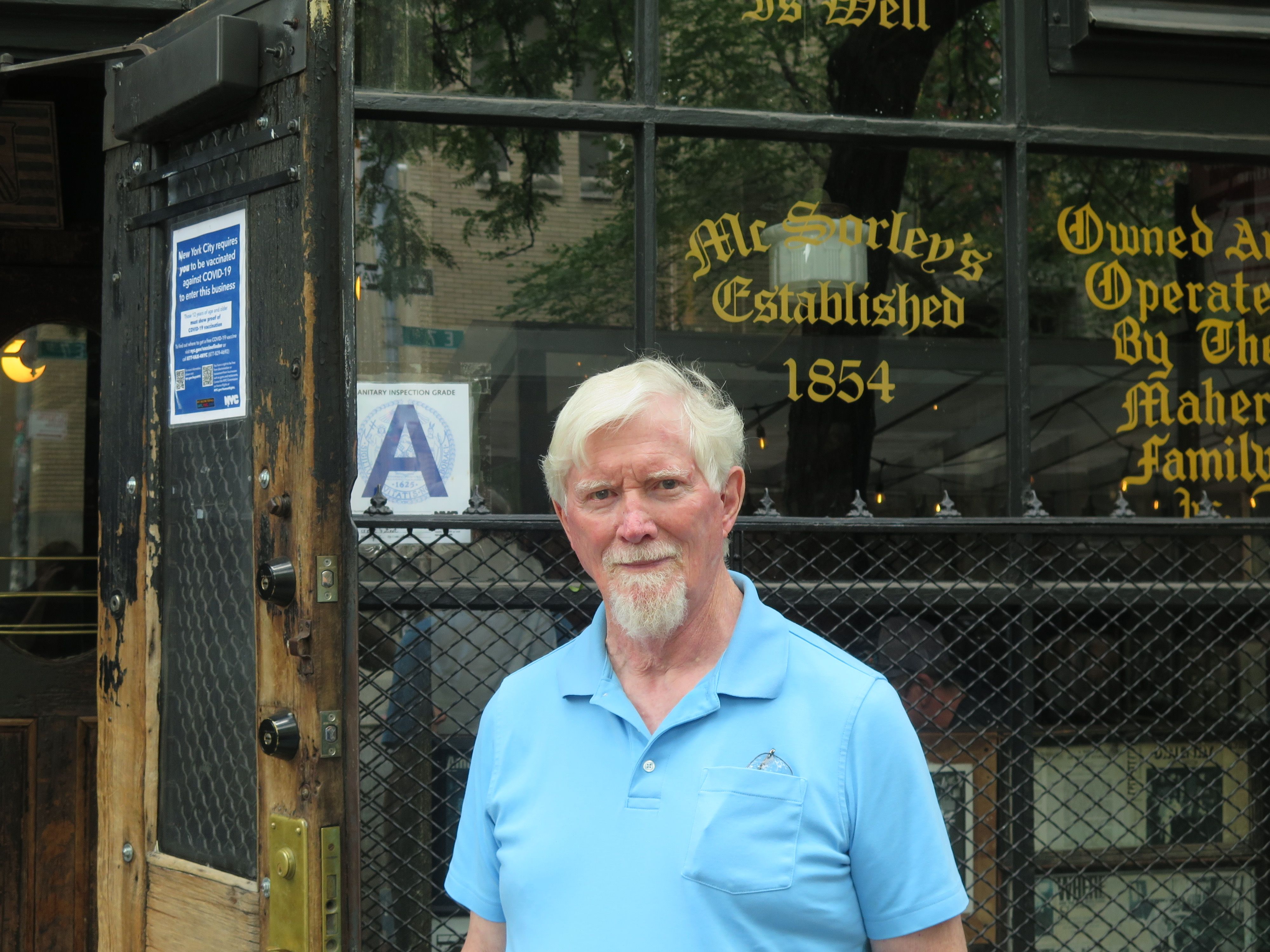 Vinnie Nauheimer: “I used the art myself as a way to vent initially.” [Photo by Peter McDermott]

Letting the art do the talking

Sometimes the interviews on TV don’t do it. People have become immune to the horror, in Vinnie Nauheimer’s view.

Twenty years ago this week, his family’s story was part of a larger one that was in the headlines – on the front page of the Daily News on two consecutive days, for instance, with pages of coverage inside.  The first day, the News’ lead story was titled “Twisted Journey of a Problem Priest”; the next, “Problem Priest Had Church on His Side.”

Victims and their families are now finding alternative ways to bear witness to the tragic legacy of the sexual abuse of children, lest anyone forget. The Kansas City-set Netflix series “Procession” has as a starting point the view that people aren’t listening anymore to those who suffered at the hands of clergy and others, or they’ve moved on somehow, or are bored by it. In “Procession,” a group of men use performance and other art forms to tell what happened to them and to raise awareness about the issue of child sexual abuse.

Nauheimer’s project -- “Silent Screams! A Gallery of Artwork Born of Clergy Abuse” -- is a work in progress on YouTube:  a currently six-minute film comprised of artwork by victims or, as in his own case as a father, a close family member.

His life changed as a result an incident at the family home that left his son distressed and in tears. That was 28 years ago, “I used the art myself as a way to vent initially. To express my feelings. I’ve done several of the oil paintings [in the film],” said the retired special-education teacher.

“It comes from a place that’s really deep. It’s hard to get a handle on it and get it out. The only way I could express the true sense of violation was through my art.

“I found other people that did the same thing,” Nauheimer said. “The artwork that they did -- I can’t express it any other way -- it just touches the soul.

“They were thrilled to do it,” he said about his requests to reproduce the artists’ work. “I did have a couple of people tell me, no, their artwork was too personal.”

For him, the “most moving, most touching, most difficult” of the art featured was donated by Vicky Reicks, whose son, Adam, committed suicide.

“What was different about his art was that he created it while he was going through his abuse,” he said. “And unfortunately, she’s had to live with it. It speaks volumes for the extent of the abuse and it speaks to her bravery.”

Nauheimer conceived the idea of bringing the artwork to an audience through film some years ago. "I'd love to see them all hang in a gallery, but that's unlikely so I went the video route," he said.

But he had no idea about how to proceed.

Then one night at an Artists Without Walls Showcase, hosted by founder Charles Hale, he got chatting with another regular, who was a professional in the film industry. “It was serendipity, 100 percent,” he said.

Sam Adelman would help him realize what he has so far on YouTube. He also helped with an approach: “Maybe just let the artwork talk for itself?” Adelman suggested.

“I still have an extensive portfolio of artwork from different people,” Nauheimer said. His goal is to include more and extend from the current six minutes to a 20- to 30-minute documentary with some narration explaining aspects of the story. “I don’t think the world has ever seen artwork like this,” he added.

Patty and Vinnie Nauheimer’s trauma began when local priest Fr. Genaro Gentile was a guest at their home one evening in 1994. “We had him over for dinner,” Vinnie said.

While the parents of four were putting their youngest two to bed, the priest joined the younger son, who was 13, watching a video in a downstairs room.

After a while, the boy fled the room and asked his parents, “Why is he touching me like that?”

The family stayed silent about the incident at the time. Eventually, though, the son befriended another boy who, it turned out, was self-harming by cutting.

“He got talking with my son,” his father said. “The same thing happened to him, only a lot worse.

“That told me that wasn’t something that was misinterpreted,” he said, in reference to the 1994 incident at his home. However, the parish dismissed the claims made by families against Gentile.

Nauheimer consulted a lawyer friend. “He asked me, ‘Vinnie what do you want out of this? I said, ‘I want this guy gone. Obviously, the Archdiocese is not going to do anything about it.’  And he said, ‘If you want him out you’re going to have to create a publicity storm.’

“And I did – sued the New York Archdiocese for $55 million. That made headlines all across the tristate area. It brought several other people who had been victims of his to the forefront,” he said. “Even with all of that. The archdiocese still came after us.”

Msgr. Edward O’Donnell, the Archdiocese’s “point man,” as the Times described him, on the issue of priests being accused of abuse, spoke at every Mass in the parish one weekend. His message, as remembered by Nauheimer, “That it was all about money and that ‘we never had complaints about this priest before.’ And they’d just paid someone off a year or two before that. A bald-faced lie from the pulpit.

“He threatened to get detectives after me. I don’t know if he ever did or not. We were trying to protect children and we ran into a brick wall. It was the most frustrating thing in my life,” the former teacher recalled.

The Times report on March 24, 2002, quoted a whistle-blower priest, the Rev. Ron Lemmert, a former assistant pastor to Gentile, ''Even though what happened to their children was not as serious as what happened to other kids, they felt they had an obligation to the other kids in the parish to try to expose this guy and stop him.”

The Nauheimers settled out of court with Gentile, sparking the headlines of late March 2002, but the Archdiocese was still in an aggressively defensive mode, defiantly saying that Gentile was a priest in good standing. On the other hand, in Nauheimer’s memory, Lemmert was very much an outcast for speaking up and supporting families. (Lemmert is still a priest, while Gentile was defrocked in 2005.)

Patty Nauheimer, who is Irish-American, taught CCD and her friendship group was based in the parish. “Sunday morning Mass was a communal thing,” said Vinnie Nauheimer, who describes his own heritage as half Italian, three-eighths Irish and one-eighth German. “You’d catch up and ask ‘How are the kids doing?’

“There was the social aspect and they were all quite religious,” he recalled.

The couple eventually severed their ties with the church. “It was very difficult to do, but eventually it happened,” Nauheimer said. Both, though, still have friends who are Mass-goers and remain in touch with supporters like Lemmert.

Nauheimer went on to write two books arising out of the episode. The first was a general overview of events. “Basically, it was a chronological account of what I went through with the archdiocese, including letters between [Cardinal] O’Connell, [Cardinal] Egan, and O’Donnell. I wanted it so I could send it down to the Library of Congress, with an ISBN number,” he said. The second was a collection of essays and poetry.

“The artwork came first. I had an incredible sense of betrayal,” Nauheimer said, adding that he is writing a third book about his experiences working as a teacher of autistic children.

“I probably hadn’t had a brush in my hands for maybe 25 years. Some of the stuff I painted I tossed because it wasn’t what anybody would want to see on a painting, especially if you were a good Catholic. And that was nothing more than anger,” he said.

Asked via text on screen at the end of his and Adelman’s 6-minute film why he continues to campaign, Nauheimer replies: “I can’t think of a better use of my time than helping to prevent another child being abused.”

The film can be viewed here: