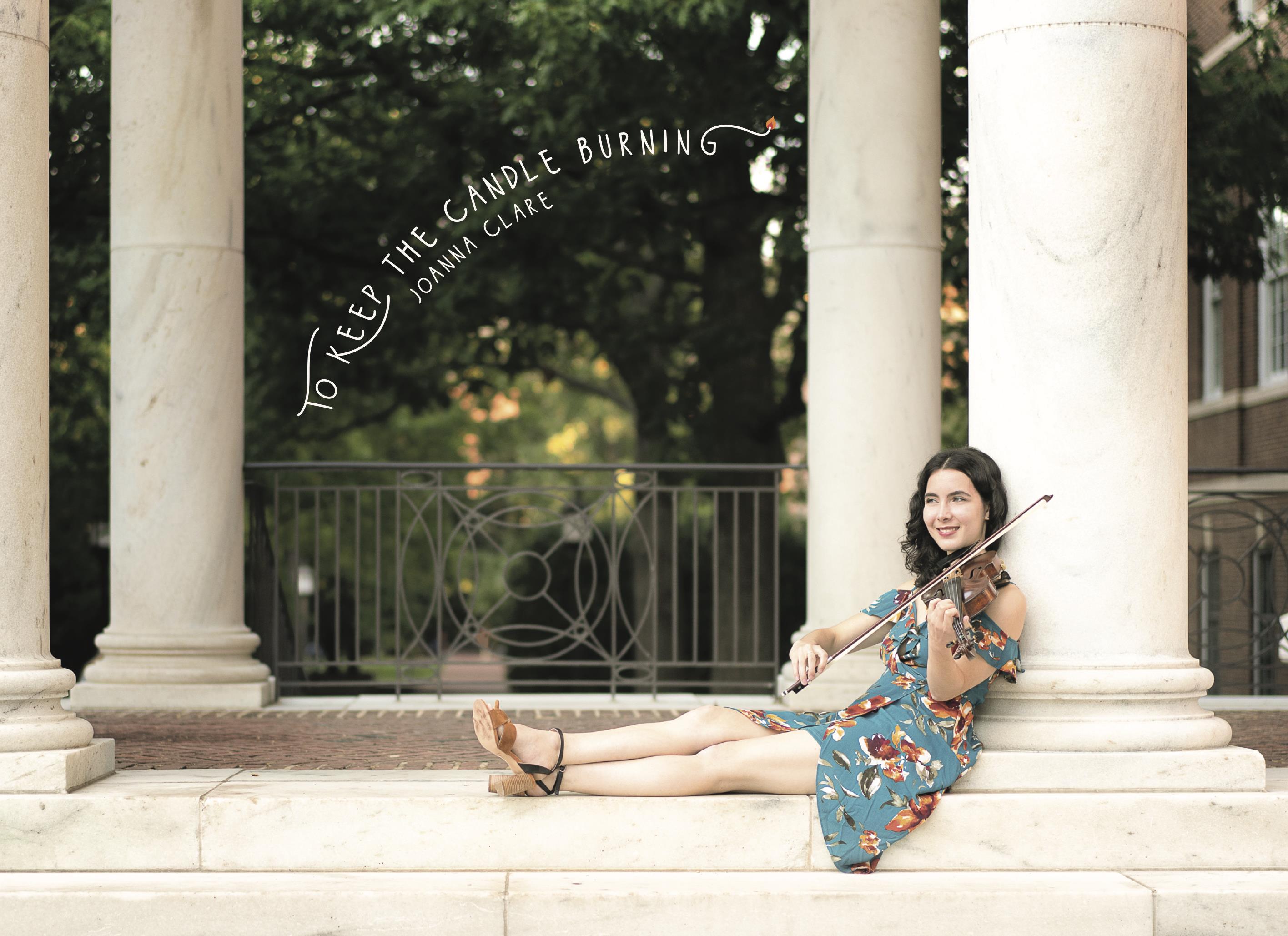 Joanna Clare is a young fiddle player who grew up in Rochester, N.Y., and moved to Baltimore in 2018, where she’s become an important part of the traditional music scene.  She’s just released “To Keep the Candle Burning,” her debut album, and it is an impressive effort by any standard.  It’s not often one hears a young U.S.-based musician with such poise and skill, but Clare reveals herself here as an A-level player who dazzles on this new release.  Fans of traditional music will be interested to hear her music here, but folks who grew up in the United States playing traditional music will be particularly fascinated, as this album is a wonderful demonstration of how their influence has been incorporated and reinvented by someone from a younger generation.

I should begin by saying that this album is a brilliant show of music in Irish America.  The musicians that appear here as guests are a who’s who of today’s great players, particularly those in Baltimore, and they include Myron Bretholz (bodhrán), Brian Conway (fiddle), Josh Dukes (guitar, flute), Billy McComiskey (button accordion), Sean McComiskey (button accordion), Matt Mulqueen (piano), Catherine O’Kelly (vocals), and Liam Presser (dance).  Folks who know will recognize this top-shelf assortment of players and understand that their work here gives this album superb depth.

And yet while it would be easy to get lost in a crew like this – especially for a younger musician – Clare’s voice on the fiddle speaks with the confidence, audacity and muscle of a person older and more experienced. It’s hard to describe, but her ability to find a way to play in cooperation with these musicians while simultaneously putting herself fully in the spotlight is an impressive feat that speaks well to her talent.

Further, if the audacity to excel in the presence of so many top musicians were not enough, Clare invokes the influence of others as standards to live up to. In the album’s liner notes, she calls legendary names including Mick Moloney, Eugene O’Donnell, Liz Carroll, Seamus Egan, Oisín MacDiarmada, Matt Cranitch, MacDara Ó Raghallaigh and others – musicians who she feels shaped her as a player – and dedicates tracks to each of them.  It’s a gutsy move and a chance that not all would be willing to take.

The album starts with “Annie on the Frontlines / Maggie Lynn’s / The Shoemaker’s Daughter,” three tunes of recent composition.  It’s a lively, well-heeled track with lots of style.  In it, “Maggie” is a tune of Billy McComiskey’s and “Shoemaker’s” of Ed Reavy’s, but “Annie,” a tune written for Annie McComiskey, is a composition of Clare’s and it’s lovely.  It’s fitting to start off her album with one of her own, especially when they’re this good.

Clare distinguishes herself throughout this album as a talented composer, indeed.  Under the mentorship of McComiskey, she’s crafted a number of tunes, some of which are include here, that are cohesive and have the whiff of quality.  The jigs “Strawberry in the Field” and “The Painter and the Chef” are lovely tunes (rendered, again, with flair), as are the reels “The Cat’s Perch” and “Insomnia.”

The album also includes interpretations of more familiar tunes.  For example, her take on the jigs “Paddy Fahey’s / The Mist Covered Mountain” is outstanding, as is her approach to the Ed Reavy hornpipes “The Brown Coffin / Brigid of Knock.”  I particularly like what she did with “The Reel with the Birl” as well.

There are also what I might call “tribute” tracks, in that they carefully honor the playing of those who had particular influence on her music.  For example, her interpretation of Matt Cranitch’s recording of “An Buachaill Caol Dubh” pulls a level of gravitas similar to that of Cranitch’s.  The same could be said of “Planxty Hugh O’Donnell,” which brings Eugene O’Donnell’s interpretation strongly to mind. In addition, her ability to channel Andy McGann, Joe Burke, and Felix Dolan on “The Luck Penny / The Pipe on the Hob,” with the help of Conway, Mulqueen, and Billy McComiskey is incredible and yielded a double take on first listening.

Finally, one of the more engaging tracks is “Erin Grá Mo Chroí,” with guest singer Catherine O’Kelly.  Learned from the recordings of Cherish the Ladies, O’Kelly does a fabulous job here, balancing a fine tone with lovely phrasing.  Clare (fiddle) and Mulqueen (piano) play supportive roles on this track, and drive the performance’s dynamics in a convincing way that adds well-executed variety.

“To Keep the Candle Burning” is a brilliant debut.  Clare’s playing is top notch, as is that of those who appear here with her.  The music here is just outstanding overall.  But what I find equally engaging is the care with which she’s paid tribute to those who influenced her: her teachers, her predecessors, and the tradition in general.  It’s a thoughtful and charming approach.  Check this one out if you want to hear some first-rate fiddle music – this is a great album.  To learn more and to purchase, visit www.joannaclare.com.