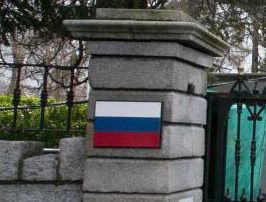 EDITORIAL: Guest Of The Nation

The visage and voice of Yury Anatoliyevich Filatov are a familiar combination in Ireland of late.

Filatov, of course, is Russia's ambassador to Dublin. He has a big job on his hands: defending the indefensible.

Filatov first came to media prominence a couple of months ago when he had to speak up for his government as Russian navy ships steamed towards a portion of the Atlantic Ocean that made up part of Ireland's Exclusive Economic Zone.

Technically, the Russians were allowed access to the area and there was nothing that the Irish government could do other than vocally protest.

Then the fishermen got involved. Irish trawlers saw the area for the naval exercises as being rich and vital fishing grounds, and the idea of live fire naval war games as a danger to marine life.

They made a fuss, a big one, and garnered worldwide headlines. The fishermen said they were prepared to sail right into the exercise area and risk their lives and boats.

Ambassador Filatov had to speak to this looming crisis on the high seas. He tried to make light of it all but, in the end, the Russians moved their exercises a few miles out of the EEZ.

It has become a lot harder for Ambassador Filatov to make light of anything since his country invaded Ukraine. So jokes about fishermen have been replaced by a stream of drivel, nonsense, propaganda and lies.

And on top of this, Filatov - who pre-February 24 described predictions of a Russian invasion as "fantasy" and the very idea of it as being "insane" - has been moaning about the way that his embassy and its staff has been treated by the troublesome Irish.

He has accused protesters of being “rough and really aggressive” at the Dublin embassy and of intimidating staff and vandalizing the embassy’s entrance.

In an interview with the state-owned Russia 24 television station, Filatov said the situation in Ireland was “frankly difficult” and he accused Ireland of being to the forefront of “anti-Russian events” in the European Union.

Filatov should check out Ukraine for something that truly meets the definition of "frankly difficult."

He is now tasked with defending growing reports of up close murder, rape and pillage by Russian troops in the area north of Kyiv, not to mention weeks of cowardly long distance bombardment aimed at civilians in the north, east and south of Ukraine.

If a diplomat in a time of war does his or her best to tamp things down and keep open lines of sane and sensible communication, even with a host government that takes strong issue with the diplomat's own government, then everything should be done to make sure that the hosted diplomat stays put, and is accorded full recognition and protection.

If the hosted diplomat insists on publicly spouting propaganda and lies, that is another matter entirely.

Now it remains to be seen how Filatov responds to the latest accusations of genocide being leveled by Ukraine that his bosses in Moscow are, predictably, dismissing as "fake."

But other reports are pointing out that barbarous attacks on defenseless civilians have long been Russia's modus operandi, most significantly in recent years in Chechnya and Aleppo in Syria.

The Russian military, simply put, is little more than a barbarian horde.

Behind the walls of the Russian embassy compound on Dublin's Orwell Road there is not a horde per se. The embassy was home base to a staff of thirty until four members were ordered to leave last week for activities incompatible with their diplomatic status. For that phrasing we can read spies.

Diplomatic relations between Dublin and Moscow may well survive events in Ukraine, at least in a formal sense.

But they can't be normal, not now, not for a long time, perhaps never again.

If Ambassador Filatov parrots Moscow's line about atrocities in Ukraine being fake news it might be time for the Irish government to consider his status - as a guest of the nation so to speak.

Lithuania sent the Russian ambassador packing this week, so Ireland would not be the first EU member nation to undertake such a high level expulsion.

But showing Yury Filatov Ireland's door should now, at the very least, be on Dublin's diplomatic front burner - as Ukraine literally burns.