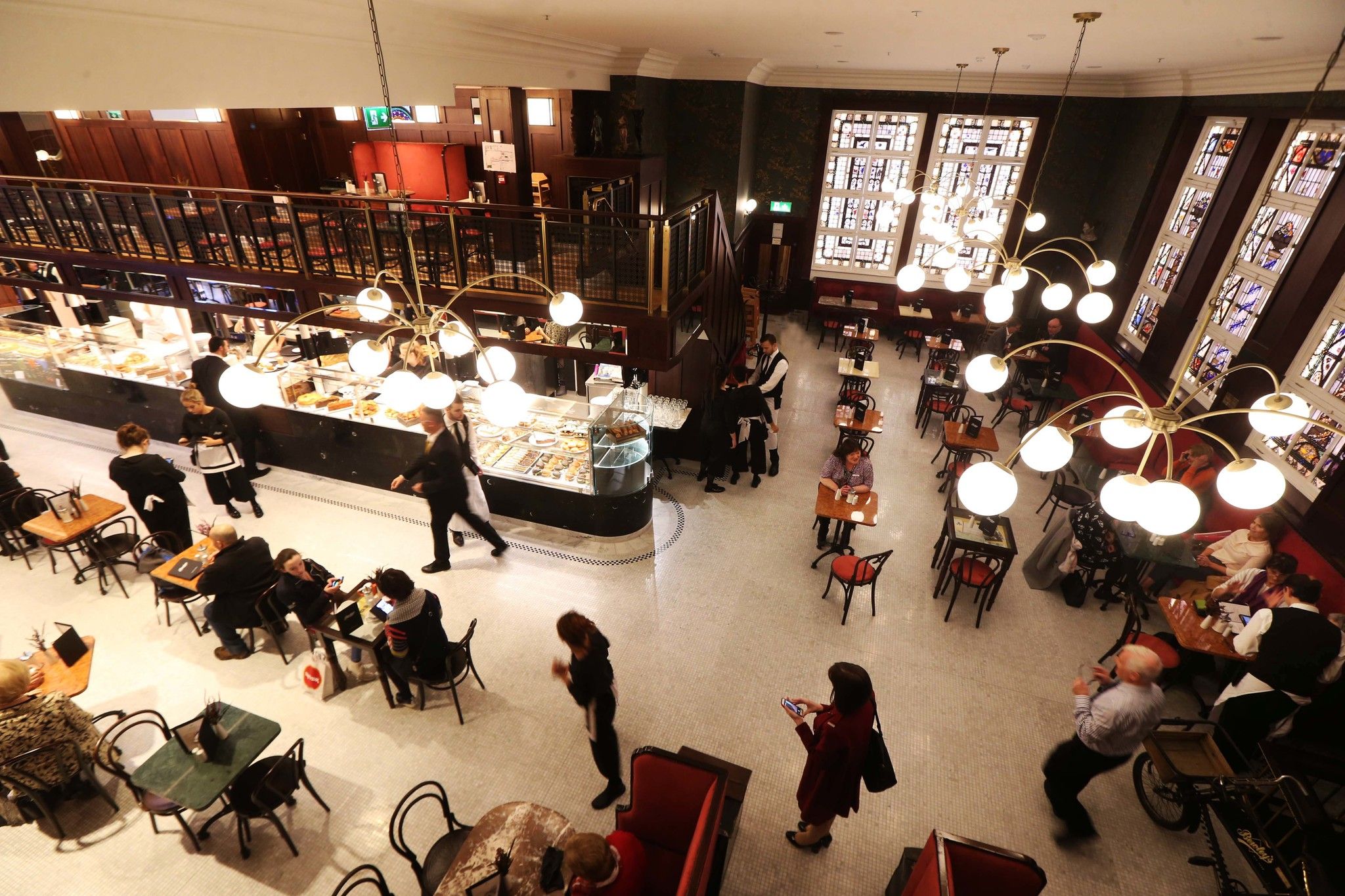 The press in Ireland has been buzzing about a controversy involving six priceless stained-glass windows by Irish artist Harry Clarke located in iconic Bewley’s Oriental Café on Grafton Street. Bewley’s argues that  Clarke’s stunning windows are decorative panels belonging to the café, which can be removed and sold, while Johnny Ronan, owner of the café’s premises, contends that the windows are an intrinsic part of the building his firm owns. Estimates place the value of the windows at over €1 million.

The controversy has rekindled interest in Clarke and his work. A gifted artist, Clarke created over 160 stunning pieces of stained glass of other-world beauty, which can be found not only all over Ireland and England, but also in America and Australia.

His friend and fellow artist George Russell, aka A.E., said of Clarke, “He might have incarnated from the dark side of the moon. Henry Clarke is one of the strangest geniuses of his time.” An important creative force in the Celtic Revival, Clarke was friends with many of the great geniuses of the Revival including the Yeats brothers, Synge, and Sean Keating.

Clarke was born in Dublin in 1899 into an artistic family. His father, Joshua Clarke, was an English-born church decorator and stained-glass artist who apprenticed Harry into the family studio. While attending evening classes at the Metropolitan College of Art and Design, Clarke won the gold medal for stained-glass work in the 1910 from Board of Education National Competition for his “ The Consecration of St. Mel, Bishop of Longford, by St. Patrick.” At the art school in Dublin, Clarke met his future wife, portrait painter and teacher, Margaret Crilley, with whom he would have three children.

Harry and Margaret moved briefly to London where he was hired to do illustrations for the publisher Harrap. Tragically, much of a commission that he was working on depicting scenes from “The Rime of the Ancient Mariner” was later destroyed in the 1916 Easter Rising.

At the end of the First World War, Harry was commissioned by Committee of the Irish National War Memorial to illustrate Ireland’s War Memorial 1914-1918, and the eight volumes were published in 1923. The 1923 edition secured his reputation as a book illustrator, during the golden age of giftbook illustration, the first quarter of the 20th century.

In 1921, Harry’s father died, and he and his brother Walter took over his studio. Receiving many church commissions around Ireland, Harry’s glass work earned praise for his finesse in drawing and his use of rich colors, especially the color blue.  In 1924, Clarke received a commission to create a window depicting scenes from John Keats’s poem “The Eve of St. Agnes.” Voted one of the most loved pieces of Irish art, it was acquired by the Hugh Lane Gallery and now is housed in a room dedicated to Clarke.

Ernest Bewley almost went bankrupt in 1927 purchasing Clarke’s stained-glass windows for the  Grafton Street branch, at the exorbitant price of £60,000. Long considered the jewel in the Bewley’s crown, the café paid a €1 million to renovate the stained-glass masterpiece. The main wall of the café displays four decorative Clarke windows. The windows are lightly coated clear glass and are decorated with small butterflies, flowers, exotic birds and colorful sea creatures.

Acknowledged as Ireland’s premier stained-glass artist by the late 1920s, Clarke was approached to create windows for the Irish office in the International Labour Court at the League of Nations in Geneva, a great honor when the fledgling Irish state was eager to make a positive impression on the rest of the world. Independent minded and flouting the prevailing puritanical Irish mindset of the time, Clarke depicted graphic scenes, including with nudity, from great works of Irish literature. He considered these pieces to be his finest work and his friend and patron Thomas Bodkin described it collectively as “the loveliest thing ever made by an Irishman.”

However, many in the Irish government did not share his enthusiasm for his creation. The president of the Executive Council [as the prime minister was known], W.T. Cosgrave, sent a letter expressing unease, especially with his “Mr. Gilhooley” panel from Liam O’Flaherty’s novel. Cosgrave stated that “considerations arise where a window is being presented on behalf of the government which in the ordinary course would not occur to the artist.” In another letter Cosgrave referred to “scenes from certain authors as representative of Irish literature and culture [which] would give grave offence to many of our people.”

Clarke was experiencing failing health, which was made worse by his anxiety over the failure of the government to install his creation in Geneva. Ultimately, the Irish Free State rejected Clarke’s window, paying the artist for his work, but refusing to install it at the League of Nations. The government felt firmly that it did not reflect the morals of the Irish nation. The refusal of the window was a crushing blow to Clarke, who considered the work a personal masterpiece. Devastated by the rejection, Clarke died in 1931 shortly after completing the commission. He was just 41.

After his death his widow learned that her husband’s masterpiece would be hidden away in government buildings in Merrion Square. Irate that Harry’s greatest work would never gain the recognition that it was due, she bought it back from the Irish government. In 1988, Clarke’s sons sold his masterpiece to wealthy American art collector, Mitchell Wolfson, who hung it at his Wolfsonian Museum in Miami Beach, Fla.

Ireland has changed greatly since Clarke’s death and  today his stunning stained-glass work is celebrated around the country. In 2019, a bridge in Cabra, on Dublin’s northside was named in his honor. Bewley’s is slated to close in November, though, and the fate of the windows remains in doubt.