Home Homepage After 35 Years, a Lucey Return to the Echo's Pages 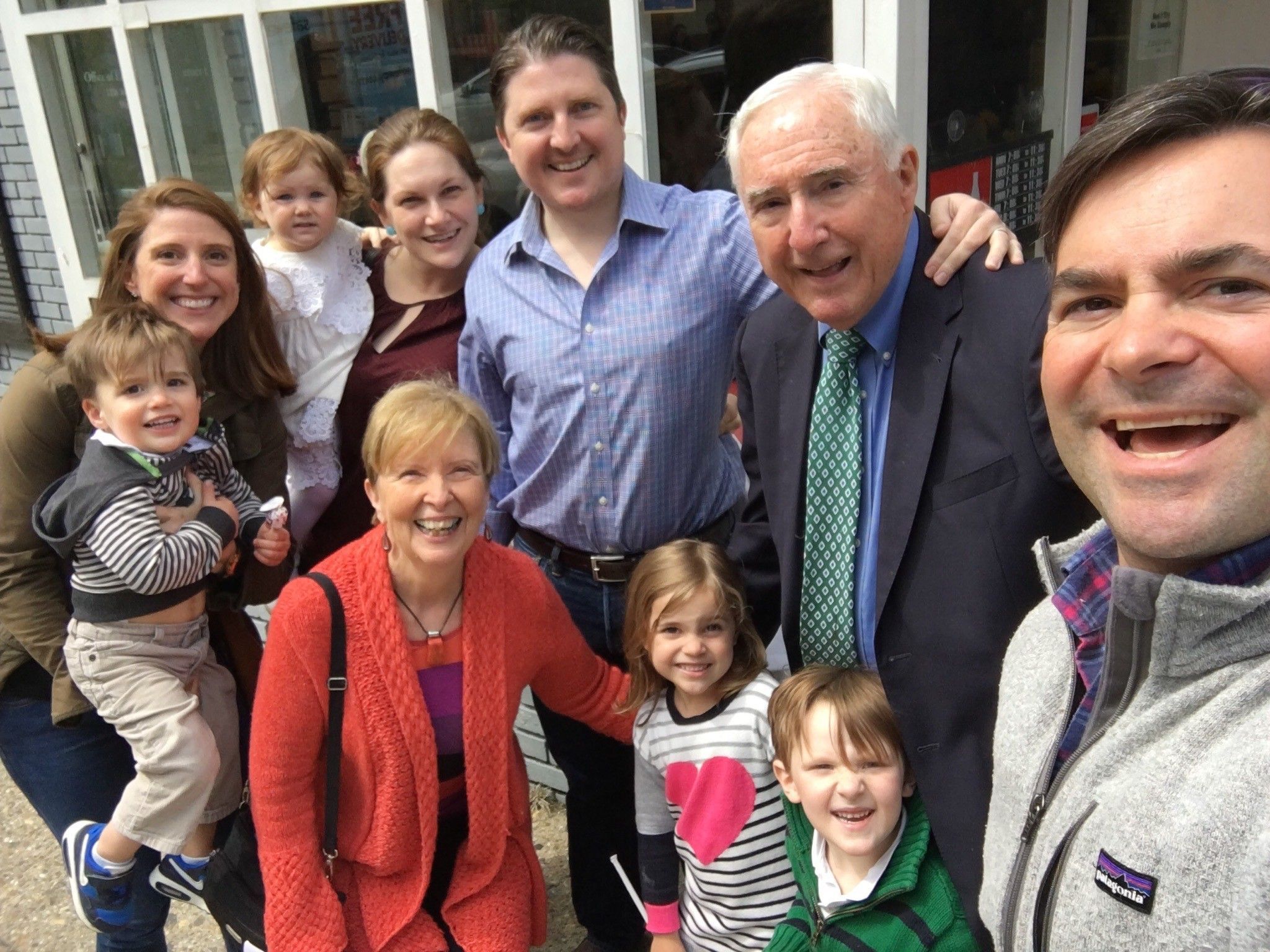 Dennis and Pam and their family.

After 35 Years, a Lucey Return to the Echo's Pages

Dennis Lucey has a fierce flair for philanthropy. It’s because he never forgets the $100 his Aunt Julia sent to his father, Jimmy Lucey, for passage to New York and California.

Dennis’ father Jimmy was born in 1897 in Macroom, County Cork. He had already brushed with the Third West Cork Brigade and the IRA by 1921. But he had his eye on America so he booked passage with a chum in 1923 on The SS President Polk.

This part of the Lucey family story was detailed in the story headlined “We Never Looked Back,” published in the Irish Echo edition of February 7, 1987 - just over 35 years ago.

“We never looked back,” he said even when faced with ‘Irish-need-not-apply’ signs. “My love for America was strong before I ever got there.”

In Redwood City, California, Jimmy met Bridget Joyce from the Aran Islands. They had one child, Dennis Lucey.

Few people can believe it, but Dennis was a shy boy who hid behind thick glasses.

“In college I got contact lenses. And the world came alive to me.” One might add that he has not stopped since. And he just celebrated his 82nd birthday.

Dennis covered sports for local papers while at Serra High School in San Mateo where he and his wife Pam recently commissioned a statue of its patron, St. Junipero Serra. Dennis says with passion, “We were put on this earth to be stewards of what we have. So it’s important for us to give back to others.”

Dennis Lucey has co-chaired the Annual National American-Ireland Gala in Washington, D.C. for the past twenty years. This annual gala has raised millions of dollars for Ireland and Irish communities around the world.

He did so again for last month's 30th annual gala which was attended by President Joe Biden.

After two years in the seminary, Dennis entered The University of San Francisco. The Jesuit motto, “Men for Others,” has framed his life ever since.

In time, both Dennis and his wife Pam would invest their time and talents in such ministries as The Jesuit Volunteer Corps, The Ignatian Volunteer Corps, and SOME, the largest provider of food and social services for the homeless in Washington, D.C.

After graduation from USF, as daughter Megan observes: “my father was just itchy. Even he knows he cannot sit still in the same place for too long.”

Son Chris wonders if Dennis subconsciously longed to go east, to make, as it were, the same rite of passage his father had experienced, albeit in reverse.

Dennis duly took the Greyhound bus east. He spent seven months traveling through the southeastern states ending and up taking in spring training. He learned he could drive a baseball player’s car back to D.C. to earn $200.

But when he arrived the agent was nowhere to be found. Dennis was almost broke. He managed for a while, sometimes sleeping on an army cot in rooms with 21 others. He soon found a boarding house for $80 per month.

“It was like a palace, he said. “Imagine, with three meals.”

Around the corner from the boarding house was the office of the Washington Post. Dennis approached the personnel director, Marian Williams, to offer her his sports writing experience. Instead she saw another gift and sent him to a colleague of hers across town. There a recruiter put an adding machine under Dennis’ arm and told him to walk the six miles of stores and offices down Wisconsin Avenue to Georgetown and see what he could sell.

“It was the best learning of my life,” said Dennis.

“I learned three things. First, be positive; believe you can do it. Second, go for the highest person there. They make the decisions. Third, if you sense they don’t need your product, then hang out and ask them questions about themselves. People love to talk about themselves. They will remember you after that.”

The company was Burroughs; the product being introduced was Main Frame computers. From Burroughs Dennis went with Xerox for 14 years. During that time Xerox sent him to American University for an advanced degree in Corporate Lobbying.

Dennis continued always looking for the next brass ring. While at Xerox he jumped at a year-long sabbatical in Brazil to manage 500 people on board the Hospital Ship "Hope."

Not long after Brazil, Dennis took a two–year sabbatical as Director of the Peace Corps in Liberia. Both assignments matched his love for the missions. Liberia found him the love of his life.

While briefly in Washington in 1976, Dennis visited the only Irish bar in town at the time, Matt Kane’s.

He would be no stranger there, being a lifelong member of the Friendly Sons of St. Patrick and a marshal in the local St. Patrick’s Day parades.

A friend in the band knew Pam Salisbury, a local biology teacher. “I’d like to go to Africa,” she told Dennis when they were introduced. Dennis said to himself, “I’ve only got three weeks here. We’ve got to get married!”

Later Pam told her tennis partner, “Boy, he really comes on strong. But I have the strangest feeling I am going to marry him!”

Their courtship lasted less than 21 days; granted, over three months in total time. There were letters to Monrovia delivered to Montevideo. The couple hung together with repeated ham radio calls consisting of “I love you; Over; I love you; Over.”

That December, they were married at Holy Trinity Jesuit Church in Georgetown. With their children and grandchildren they now fill the first pew each Sunday and have been active leaders at Holy Trinity for  over 40 years.

Pam’s effervescent personality, her genius in planning events, as well as her artistic abilities, give a festive quality to the many “Giving Back” events the couple chair.

Jimmy Lucey did not return to Ireland again for 46 years. But Dennis and family began an annual pilgrimage to the relatives as soon as Chris was born.

Now a managing director at Newmark Knight Frank, a commercial real estate company, Chris says: “We enjoy bringing the extended family together with 50 people at dinner for our annual Lucey gathering in Macroom, as well as our family pilgrimage to the Dun Aengus on the Aran Islands.

"It made us realize how Dad and Jimsey before him saw family as such a central part of our Irish heritage.”

Daughter Megan, a reading specialist at Langley School in Virginia, has equally fond memories of Dennis and Pam in a rented car (“the size of a suitcase”) as Pam navigated with maps coming apart at the folds as she led the children in songs.

“Those trips were such a way of our being family,” says Megan.

The pandemic ruled out a planned summer trip to Ireland. However, the family gathered for a Christmas in New York, a visit that included a ferry trip to the Statue of Liberty.

Said Chris: “I looked at these two young children, three generations of Luceys with their Daddo, watching the same scene that would have been Jimsey’s first glance of the new world. It was such an emotional time for me.”

Could Jimsey ever have imagined the richness of the Irish life he was bringing as he stepped off that ramp? For starters, try Faith, Family and Philanthropy. Some legacy.

Natalie T. Ganley is based in Arlington, Virginia