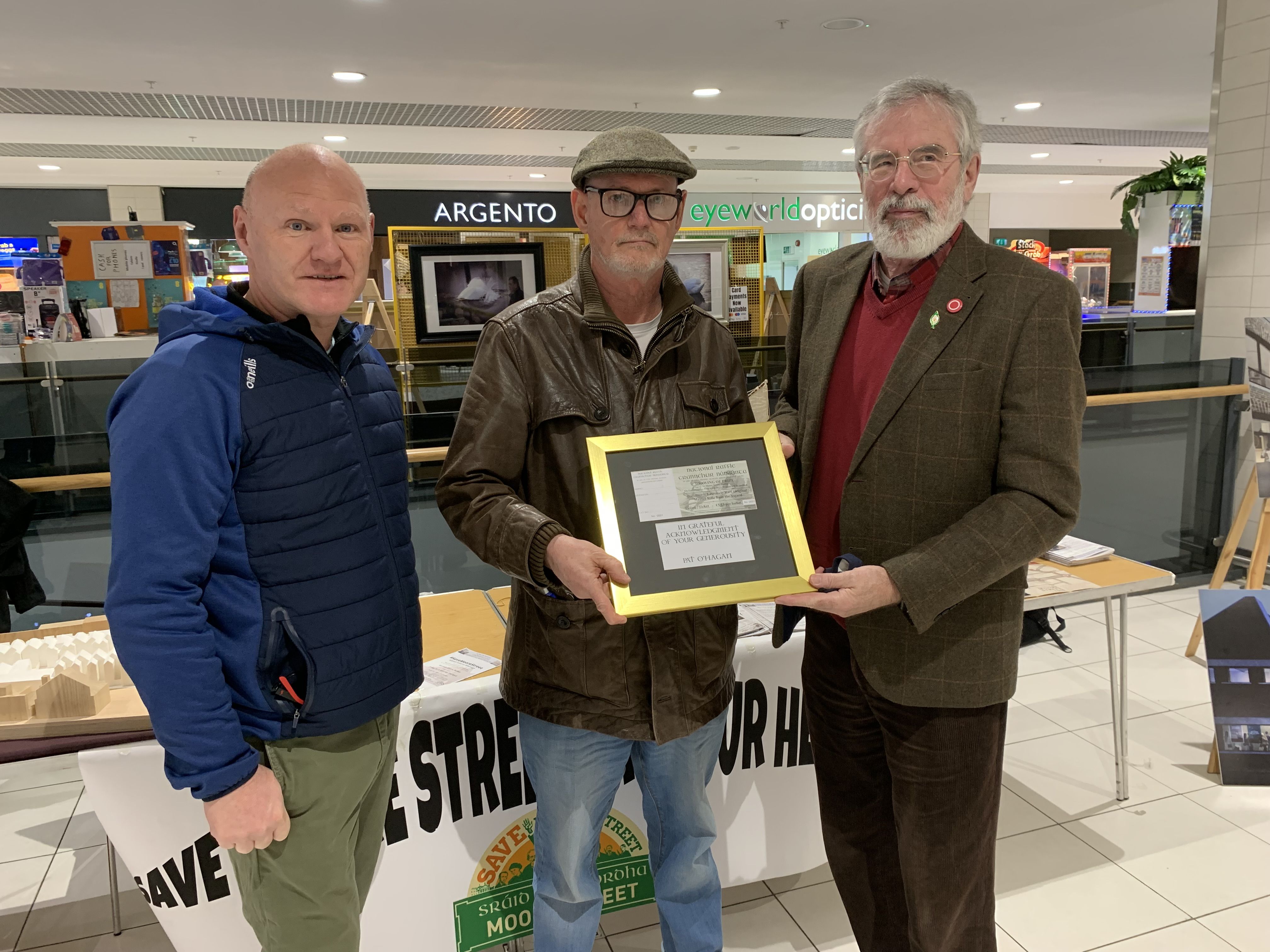 ADAMS: Here's A Question for Jeffrey

The democratic question remains the key issue internationally. It has been so since people asserted their right to citizenship. At the heart of that is the entitlement to self governance. That is governance of the people, for the people and by the people. Without outside interference by others.

This issue, or the denial of this right, creates and underpins conflict. That’s what is at the core of the conflict in Ukraine, Palestine and other places. It was the cause of conflict in our own place and remains the main cause of division here.

Some have reduced this question of democracy to whether the unionist parties will vote for a Sinn Féin First Minster. This is an important question. Without doubt, Sinn Féin accepts the right of a unionist to that position if that’s what the electorate decides.

But none of us should be surprised at the two main unionist leaders refusing to state clearly their acceptance of a Sinn Féin First Minister if that’s what the people decide.

Doug Beatty can speak for himself but it is clear that Jeffrey Donaldson is gearing up for a post election negotiation and this is part of his tactical approach. Of course, he also may not be prepared to accept a Sinn Féin First Minister. If so, he should say so. Loudly and clearly. Either way he should spell out his intentions.

But the issue of democracy is a more profound one than the a-la-carte attitude of the DUP to the election of a First Minister.

I believe that there are certain rights which people require if they are to be happy and have the basics for living, including the right to food, to water, to a home and work and to health and education services. Society must be shaped around these rights. Society must be based on equality and shaped around people – citizens – not elites, monarchies or hierarchies.

Among these rights is the right to self-government and the right to have maximum control of that government. The exercise of self-determination, or the denial of it for people in Ireland, has bedeviled Anglo-Irish history.

For the life of me I can never imagine why anyone would want someone from another country to govern them. Of course we should all co-operate and work together in the common good. But I wouldn’t like to be dictating or taking decisions for people in places that I have no right to be involved with. That is their prerogative. It is not mine. Though I stress, as an internationalist, my willingness to find common cause with others on the basis of equality and a better world.

When Britain had an empire some Irish people from the ruling classes here supported that concept. That’s why they rose to high positions in that system. They were imperialists. Others, who were not necessarily imperialists, but mostly unionists and working class, also liked being part of the Empire.

Now Britain no longer has an empire but some still cling to rituals and false memories of the old order. Brexit is a good example of that.

Nowadays, there is growing anecdotal evidence that some unionists are increasingly being exasperated by the attitude of the English government toward the people of the North. Boris Johnson brazenly breaks international agreements and tells lies about Downing Street parties while others are expected to follow the rules. He has a right wing English majority in the British Parliament that empowers and facilitates his actions. According to the most recent opinion polls 75% of the British public don’t trust him. He clearly cares nothing for working people, and even less about Ireland.

This, and the frequency with which the Tories historically, and in more recent months and years, have repeatedly stabbed unionists in the back, are a powerful argument for taking power away from Westminster and asserting control over our own affairs. Despite this reality, unionist leaders remain locked into an unhealthy relationship with the Tories and with Westminster.

And so back to the issue of self-determination. This is democracy in its fullest sense. That is, the right of the people of the island of Ireland to govern ourselves. We also have the wit and the wisdom, working together as equals, to govern ourselves in our own interests better than anyone in Westminster.

I want to live in a truly representative democracy in a politically independent and reunited Ireland. There is now a peaceful way to achieve this through the referendums contained in the Good  Friday Agreement. There is a responsibility on the Irish government to bring forward a strategy to secure this. A first step would be to convene an all Ireland Citizens’ Assembly which would bring together opinion from all sectors of society on this island to plan for the future and to prepare for the referendum. Consultation, engagement, persuasion and negotiation with a view to securing active support for a new Ireland must be the means towards these ends.

That is the choice facing political unionism: to join with the rest of us, or to stagger from one self-inflicted crisis to the next one. Unionism is part of our shared history. So too is Orangeism. It should also be part of our future. Orange is one of our national colors. The challenge is to join Orange and Green together in a new dispensation based on equality.

My little piece last week about radio programs sparked off recollections among some of my old prison pals, of singsongs in the H Blocks when I was on remand there one time.

The Remand Block was a mixed one. That is both republican and loyalist remand prisoners were held there. Relationships were generally well mannered and without some of the fraught hostility and dangers of remand in Belfast Prison.

There were regular singsongs after lock up with singers warbling their contributions out the gap in the cell doors. By mutual agreement songs which may have given offense were generally avoided. At that time Downtown Radio had a Country and Western program hosted by Big T. His catchphrase was “Keep It Country." That was also, if I recall correctly, the name of his program.

The Keep It Country phrase was adapted by the remand prisoners and yelled out in unison if any singer drifted into an unacceptable tune during the singsongs. Such lapses were shouted down by repeated Keep It Country chants and banging on the doors and pipes. It worked well.

Frankie Johnson was one of my favorite singers. Frankie, originally from St .James in Belfast, is now exiled in Newry. His rendition of Tom Jones standards was exceptional. Especially "Delilah." The combined republican and loyalist backing singers belting out the chorus stays with me yet. Especially the close harmony wee "doodle doodle doodle doo" innovations  which punctuated Frankie’s  "my my my Delilah, why, why why Delilah" lines.

Incidentally, I am glad to report, fingers crossed that my Covid recovery continues. I am doing better than many other unfortunate folks. In fact, my main symptom was lethargy. A profound ability to sleep around the clock, which is no bad thing. Sleep, we are told, is a great healer. I am really grateful for my vaccines and booster. And to our health workers. I credit them and my mask wearing and social distancing with my ability to dodge the Covid for almost two years.

But just when I thought I was out the gap - whack - Covid sneaked up on me. Ach well…….

Finally, apart from radio memories my recent acquaintance with Covid included me having very vivid dreams. I have read that there is a Covid dream aspect to this virus. I can testify to this. My dreams all seem to involve my friend Gerry Kelly. The funny thing about it is that when I awoke from the dream and then fall asleep again the dream picks up where it left off. It’s like a dream serial.

The problem, as with many dreams, is that while it is vivid when I awake by the time the next day comes my dream is hazy and vague. Except for Gerry Kelly’s heroic presence. Strange!

The Moore Street Preservation Trust launched their alternative plan to preserve this historic 1916 site last week in Belfast and then had a stall in the Kennedy Centre last Friday and Saturday. Thanks to all who stopped by and to the many who bought raffle tickets.

The prize is one of the iconic Howth rifles smuggled into Ireland in 1914. The ballot will be drawn on Easter Monday. So there is still time to buy a ballot if you are interested in owning this historic artifact. Just log on to the Moore Street Preservation Trust Facebook page https://www.facebook.com/MooreStreetTrust/ or follow the links to the raffle at  http://arasuichonghaile.com/moorestreet.