Home Opinion A Ship and the Embodiment of Irish America's Soul 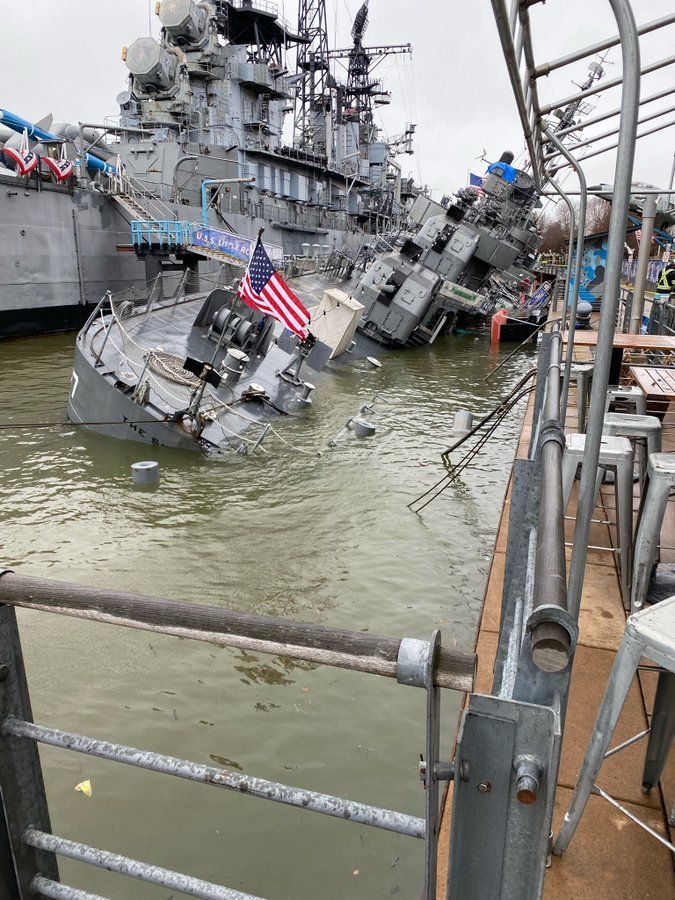 The Sullivans is taking on water but the Stars and Stripes still flies proudly at the stern.

A Ship and the Embodiment of Irish America's Soul

Just a couple of weeks ago, on April 14, media outlets were showing dramatic images of the USS The Sullivans, a World War II destroyer that was on exhibit at the Buffalo and Erie County Naval & Military Park, sinking into lake Erie.

The picture showed the ship listing at a nearly 45-degree angle, its decks awash, yet the American Flag at the stern of the old warrior was still above water and proudly flying.

Media outlets repeated the same abbreviated history of the USS The Sullivans: how the ship had been named for the five Sullivan brothers who lost their lives during the battle of Guadalcanal while serving together on the USS Juneau, the most extensive loss experienced by one family during the course of the war.

The Sullivans was the first ship the U.S. Navy had ever commissioned honoring more than one person and had a distinguished war record, earning nine battle stars in World War II and two in Korea in addition to participating in the Cuban Missile Crisis.

While all of this is factually correct and warrants saving the ship as an essential part of our nation’s history, the importance of The Sullivans transcends dates and facts. It is an embodiment of the Irish American soul.

When the five Sullivan brothers enlisted in the U.S. Navy on January 3, 1942, it was with the stipulation that they not be separated, famously stating, “We stick together.”

"We stick Together” became the defining phrase that has been associated with them ever since and became the ship’s motto of “USS The Sullivans.” Some may question the truth of the Sullivans making that statement to a Navy recruiting officer; it sounds like something invented by Navy PR or Hollywood. However, I doubt that few who grew up in an Irish American family would doubt it, many having their own version of a “Sullivans story” pointing to the strength and importance of family.

My “Sullivans story” also goes back to World War II. My father was the youngest. There was a seven-year gap between him and his brother Bill.

Bill was already in the NYPD when World War II broke out and had an exemption as a member of an essential service. My father was seventeen and about to graduate high school. He decided to enlist early in the Navy rather than leave his fate to the draft board.

My father woke up early on the day he was to go to the recruiting station only to find that someone else was using the shower. In a few minutes, Uncle Bill emerged. My father asked, “Bill what are you doing up?” Uncle Bill replied, “I’m going with you.”

With the indignation of a teenager who believes his maturity is being questioned, my father said, “Bill, I am old enough to enlist. I think I can find my way to the recruiting station.”

Uncle Bill responded (probably with colorful brotherly language), “I am going with you to enlist.”

Now taken aback, my father asked, “Enlist? Why Bill, you’re on the cops?” to which Uncle Bill responded, “Do you think I could ever look at myself in the mirror if I stayed home while my kid brother went off to war?”

With that, they went to the recruiting station and enlisted together. The Navy did separate them. My father became a Corpsman with the Marines and was at the invasions of Iwo Jima and Okinawa, while Uncle Bill served on the carrier USS Shangri-La. After the war, both would have long and distinguished careers in the NYPD.

The recent images of The Sullivans, a ship that survived kamikazes and typhoons now sinking in New York, brought back more than nostalgia, but also heartache and concern.

It is hard not to see The Sullivans as a metaphor for the current state of Irish America. Irish America has “been taking on water” for some time too. An unjust immigration policy has meant that the “No Irish Need Apply” sign has hung on the golden door of immigration for half a century while it has swung open widely for others. Our Irish American organizations are struggling to recruit new members in the wake of shifting demographic and social norms.

Certainly, the Covid crisis was a major hit beneath the Irish American waterline claiming generational Irish American businesses that can not be replaced. Like The Sullivans, the flags were still flying during the recent St. Patrick’s Day season, but it was hard not to notice the smaller parades and absence of many units. After a two-year hiatus, Irish America is listing.

Irish America needs to invest and reinvigorate itself. Too often, we prove the admonition of the poet Emily Lawless “Fighters in every clime. Every cause but our own.” If we care about our identity, we must invest in it, work at it, and stop assuming it is simply transmitted in DNA like a blood type.

It is time for us, as a community, “To Stick Together." Coming together to save the USS Sullivans is a good place to start.

Donations to help save The Sullivans can be made at https://www.nyaoh.com/uss-the-sullivans.