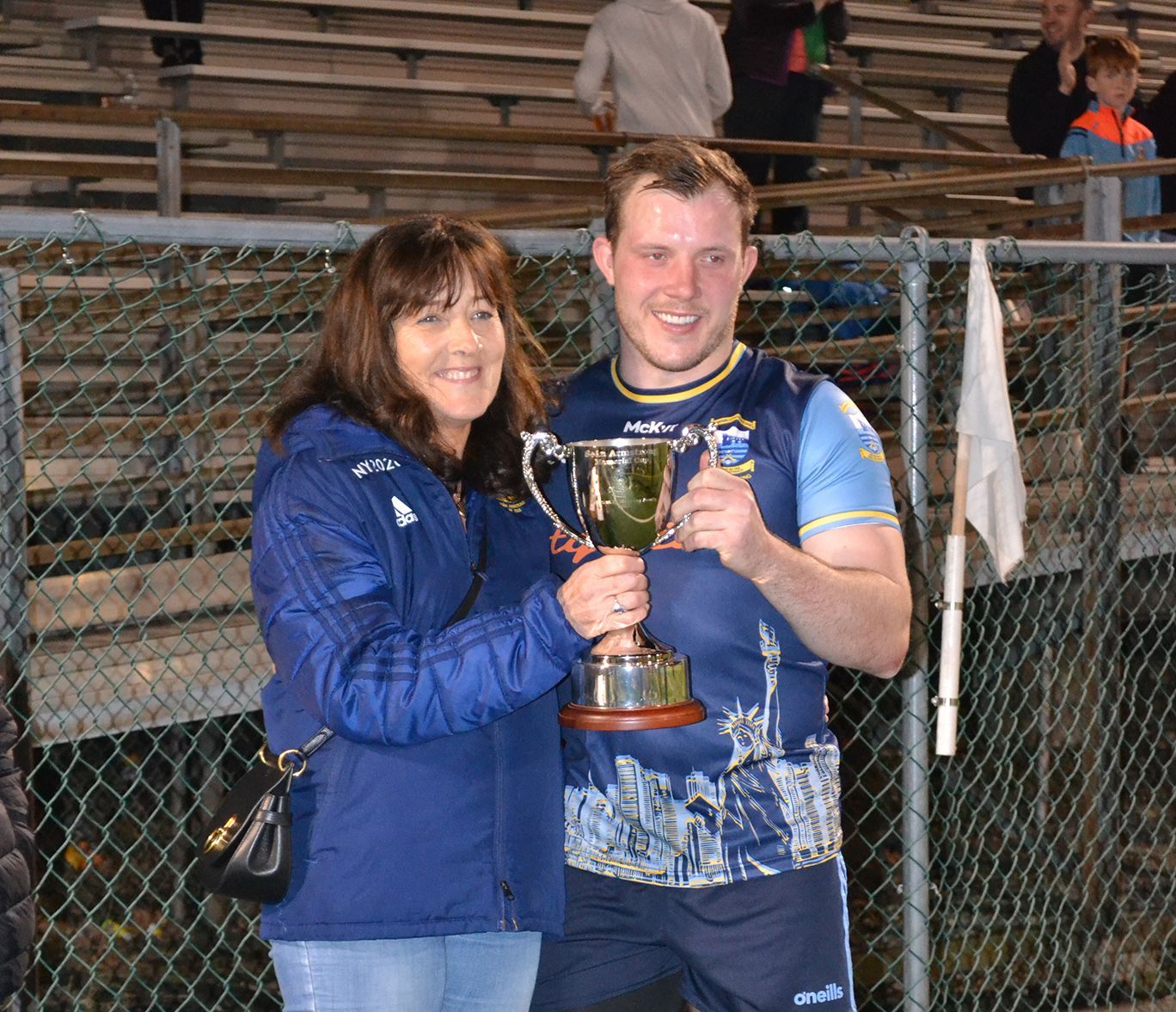 Salthill captain Gearoid Armstrong was presented with the cup after Friday evening's game by his mother Annette Armstrong. PHOTO BY SHARON BRADY

This game for the Sean Armstrong Memorial Cup was supposed to be played two years ago but the Covid intervened and the game had to be postponed. The late Sean Armstrong was very much involved in the New York GAA scene in the 1980s, notably captaining the Hartford team to a junior championship title in 1988. Later upon returning to Galway, Sean was a major tour de force in playing, coaching and training teams across the age spectrum. Sadly Sean passed away in 2019, and thus was conceived the idea of having a memorial tournament involving New York and Salthill: two areas that were a major part of the Armstrong family’s sporting and social life. The game finally got underway on Friday evening. The weather was ideal and a good crowd was on hand as a highly entertaining and exciting game unfolded with the issue in doubt going right down to the final minute.

Meanwhile New York started impressively as a timely sequence of deft passes resulted in Adrian Varley hitting the opening score in the first minute.  New York remained in the driver’s seat as Ger McCullagh, Peter Fox, Mikey Brosnan and Stephen Monaghan were excelling in the early exchanges as their fitness and support play had the Galwegians stretched defensively. Center back Keelan Beirne sallied swiftly down the middle but his effort drifted wide. Then a bout of tenacious tackling set the scene for New York’s second point as Peter Fox capitalized on a turnover to score.

Five minutes had elapsed before Salthill found their bearings and almost the net. New York nearly paid the price for deploying so many up front as a long ball from Donal Hunt, who had a powerful game, found Michael Kitt lurking behind the New York defense but his palmed effort fell outside the post as keeper Cunningham advanced off his line.  Meanwhile apart from the early defensive snafu, Alan Campbell, the former long-serving Tipp fullback gave a competent and confident performance.

Salthill continued to attack but all they had to show were three wides before the captain Gearoid Armstrong turbo-charged his way from midfield and rode several hefty tackles before landing an inspirational score after 11 minutes. Still New York were dominating the possession stakes and a long ball to target man Johnny Glynn looked destined for the net but it was parried brilliantly by keeper Nevelle.  Despite monopolizing possession, the New York scoreboard remained static as shots were missed or were short of the target, plus full forward Glynn had another goal-bound effort go agonizingly wide outside the post after a nice bout of support play.

On the 20-minute mark wing back Dan O’Sullivan landed a fine point, and this newcomer to the Big Apple GAA scene would go on to have a very productive outing. Meanwhile Salthill were stepping up their performances especially John Maher and Mickey Culhane  as their chief attacker Hunt got their second point, and it was quickly followed by another from Paddy Kitt to leave the scores level with 10 minutes left in the half. Salthill then jumped ahead courtesy of a well-executed goal from Ultan Sheerin. Owen Deeley extended the lead to four points after a patient buildup. However New York rallied back with another fine point from winger O’Sullivan, and Niall Madine entered the fray and made his presence felt immediately with a point.

As the period wore on the exchanges were much more evenly balanced as Hunt slotted over a free and Aiden Halloran chipped in from the corner. New York finished with a brace, Connell Ahearn had the first and O’Sullivan the second to leave Salthill leading by 1-6 to 0-7 at the break. These two players look like valuable additions to the squad. Manager Johnny McGeeney opted for two different lineouts so as to give every member of the panel a half. Granted New York had considerably more possession than their opponents, unfortunately for them the scoreboard didn’t reflect it. Obviously New York has to adopt a more optimal shot selection as well as engage in a more penetrative or incisive approach once inside the 50-yard mark. Too much lateral movement enables the defense to clog the scoring channels.

Meanwhile, New York had a powerful start to the second half as they totally dominated the third quarter to put five unanswered points on the board. Niall Madine continued to be a solid target man, as he made a mark and duly slotted over a point.  Jack Reilly entered the fray and seemed to thrive in the action as did Eric Monahan and Tony Donnelly, the trio soon had three points on the board.  New York were also doing well defensively as Scally, Reilly, Hogan and company were all driving forward.

An incisive run by Peter Cronin set up Conor Mathers for a point. Midway Salthill trailed by three points, and true to their name, the Pirates were not ready to go away empty-handed. A pointed free from Donal Hunt steadied the ship and another after Paddy Culhane claimed a mark had the Galwegians coasting. Then, came the best score of the game — a goal from the man of the match, Donal Hunt, to put his team on the crest of the wave. Aiden Halloran added another to give his team a four-points lead with just 10 minutes left on the clock. New York battled back as Jack Reilly hit three and a powerful strike from Dylan McDermott had the teams level, and the crowd on their feet with just three minutes left on the clock.

The exchanges were now hectic as both sides scrambled to get over the line. Michael Kitt got his team back in front, but New York had a chance to level up but the free just drifted outside the post. Then as time ticked away Salthill played a very judicious game of keep the ball so as to maintain their slender, but crucial lead.

The Sean Armstrong Memorial Cup was presented by Annette Armstrong, spouse of the late Sean, to Gearoid Armstrong, the winning captain, and also her son. Annette thanked both clubs for hosting the game, and especially all those who travelled from Ireland as well as family and friends of the Armstrong family who came from Hartford, Long island and Pennsylvania. Gearoid in his remarks, noted that they would like to come back to defend their title next year. I’m sure New York would love to have them back, and of course then to exact revenge.

Gearoid also said he was quite happy not to be bringing the plaque home with him, euphemistically it was labeled a commemorative emblem, but really it was a consolation piece for the vanquished. Though New York didn’t win, I’m sure management will be quite pleased with some aspects of the performance, especially the fitness, the possession, the support play, some of the scores, and the overall discipline.

Meanwhile it was a very useful workout as New York prepare for their Connacht Championship game with Sligo in a few weeks. It’s difficult for management to assess progress from in-house scrimmages. However the tipping points were capitalizing on bona fide goal opportunities. Galway got three, took two, while New York created two, but netted none. Critics or cynics will be quick to point out that the opponents were just a club team. True, but a very formidable one, backboned by a phalanx of intercounty-caliber players, and of course managed by one of the best in the business, John O’Mahoney. Johnno has the rare distinction of winning provincial titles with three counties, plus two All-Irelands with Galway. Incidentally the chairman of the Salthill club, Alan Mulholland, is also a former Galway star.  The chairman presented New York chairwoman Joan Henchy with a Salthill Knocknacarra jersey, and Joan reciprocated with a New York jersey memorializing Sept. 11.

Overall a very competitive and entertaining game of football and judiciously officiated by referee Peter McCormack.