Home Ireland on cusp of Triple Crown after Twickenham win 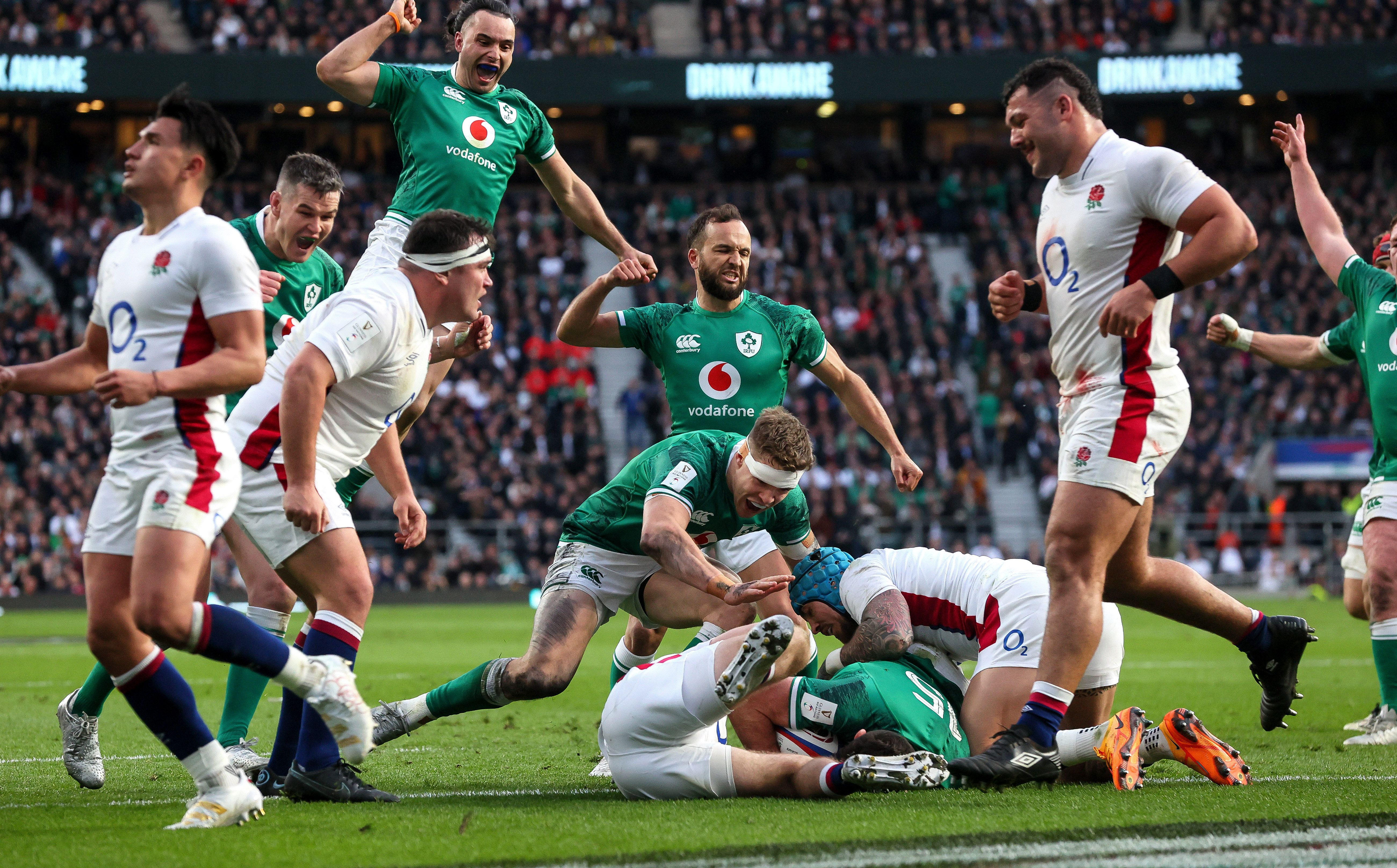 Ireland on cusp of Triple Crown after Twickenham win

Ireland have it in their own hands to become Triple Crown winners this Saturday at home to Scotland in the Aviva Stadium but they will need England – the team they vanquished in Twickenham on Saturday – to do them a big favor in France if they are to win the Six Nations championship as well.

However Irish skipper Johnny Sexton believes that Eddie Jones’s team can do “some real damage” against the current table-toppers and help Ireland make it a double reason for celebration this St Patrick’s weekend.

While a win in Dublin will guarantee us the mythical Triple Crown, while a draw or away win by England in Paris would land the championship in green hands as well.

Ireland had a rare win in London last weekend after playing all but 90 seconds of the game against 14 men following the sending off of Charlie Ewels for a head high tackle on Irish lock James Ryan.

While much has been made of the England performance in keeping in the game at 15-15 with 12 minutes remaining, the truth is that once referee Mathieu Raynal correctly issued a red card so early in the game, he proceeded to referee only one side by penalizing Ireland at every turn, but particularly in the scrum, for the rest of the game.

With Marcus Smith kicking five of the six penalties handed to him on a plate, England were able to keep in the game when in truth they were outplayed by an admittedly malfunctioning Ireland.

That is not to deny the heart England showed in fighting might and main for every ball, something Sexton believes might help Ireland’s cause in Paris.

“I think England have a great chance of winning next week, like they always do, because England are England, they’re one of the most dominant teams in world rugby," he stated.

“They were in the World Cup final only a couple of years ago, they’re building a new team and they’ve had some big performances themselves over the last six, seven months, beating South Africa and Australia in November. England are a very good team and we gave them huge respect.

“We probably didn’t get the performance that we wanted throughout the game but I think we showed glimpses of it. And I think England could go and do some real damage to France next week."

Ryan’s concussion history will probably mean that he will sit out the Scotland game although Head Coach Andy Farrell claimed he was joking after the game and appeared to suffer no ill effects. However he will go through the normal medical protocol before either Leinster or Ireland will know for sure where they stand in terms of his availability for the rest of the season.

On the question of winning the Triple Crown, Sexton said: "We’ve got a chance to win a Triple Crown at home. We’ve very rarely had a chance to play for something in the Aviva in front of our home crowd. Often when we have it’s been away from home. Already in the dressing room, we’re very focused on what’s ahead of us.”

France are on 18 points with Ireland in second place on 16 points, knowing that a bonus point win and even a French draw or loss would give them the championship.

The hope will be that the officiating will be better at both venues than was the case in Twickenham where Ireland conceded almost twice as many penalties --  15 to only eight.

In another era, we would have lost out but the side has grown and changed its defensive spots to become a “total rugby” team which refuses to back down when the chips appear to be stacked against them.

This meant that when England had reeled in James Lowe and Hugo Keenan tries with penalties on the scoreboard to leave the score 15-15 going down the home strait, Ireland stuck to their expansive game place and were finally rewarded late in the game when substitute back rower Jack Conan and substitute front rower Finlay Bealham barged over for vital touchdowns.

In the aftermath of the game when many experts got a chance to look at the penalty count in the scrums, the consensus was that instead of 6-0 to England, it should have been 3-3 or possibly 4-2 in Ireland’s favor. England cheated by not aligning properly but the referee didn’t seem to understand that and went every time for a fans’ cheer when adjudicating in favor of England.

When Smith levelled the game with 20 minutes left, it was a brave man who would have predicted such an outcome as actually occurred. There again Farrell must be lauded in the way he used his replacements with Conan, the excellent Robbie Henshaw and  Rob Herring all contributing big time once unleashed into the fray.