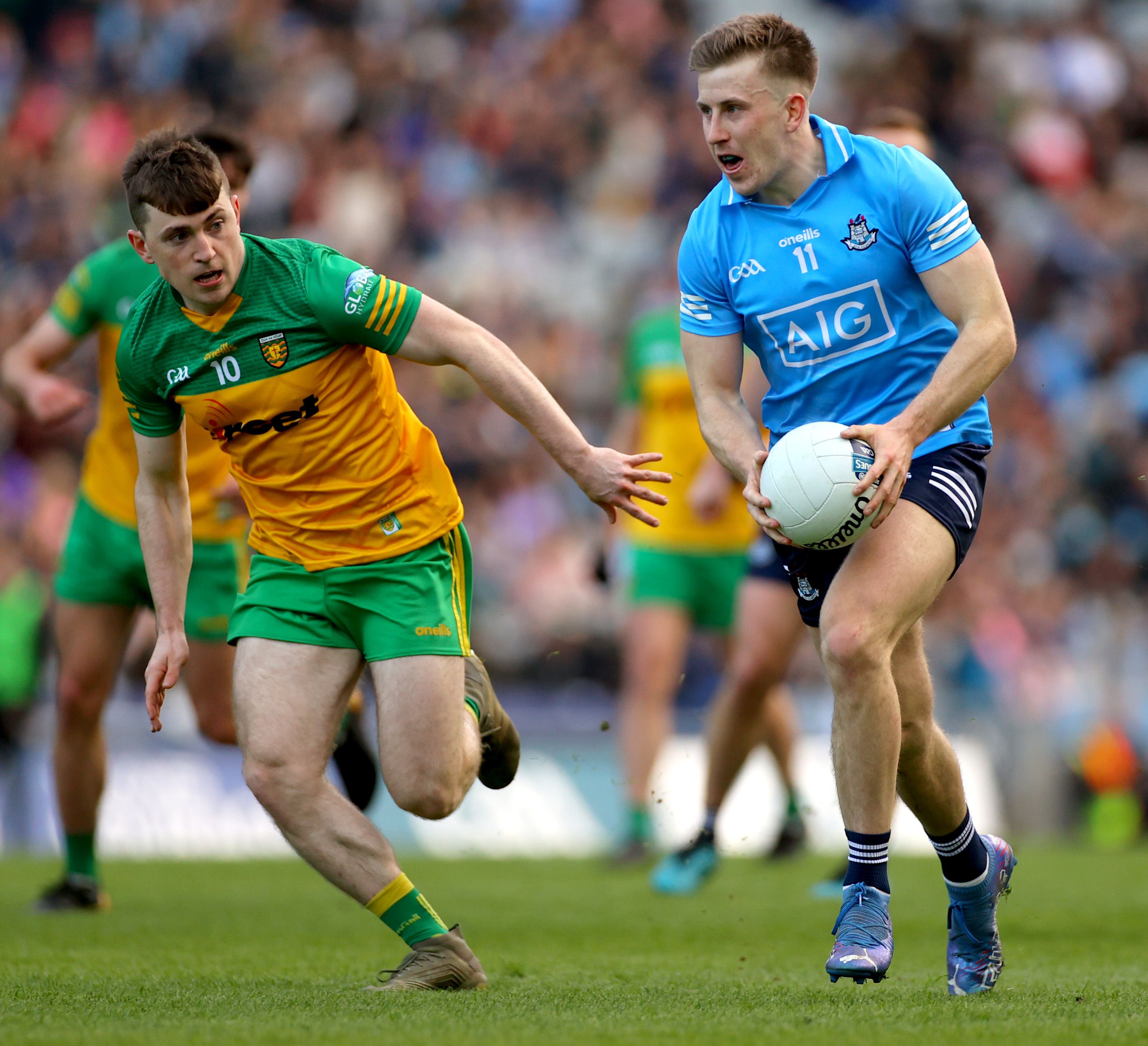 Dublin still battling to stay up

The Dublin swagger is on the way back following successive wins against Ulster giants Tyrone and Donegal over the past two weekends.

After introducing all of their main men, bar the still injured Con O’Callaghan, in recent games, you could feel the return of confidence into the blue outfit at Croke Park on Saturday when they came from five points down against Donegal at one stage to win far more easily than their four-point winning margin suggests.

It means their fight for Div. 1 survival goes down to this weekend when they travel to Clones to take on Monaghan – never an easy opponent in St Tiernach’s Park.

If you discount the opening quarter when Dublin looked at odds with their game, Dessie Farrell's side performed very well from then on and once Niall Scully got through for a goal to cut the Donegal lead to the minimum, there was only ever going to be one winner.

Part of the Dublin improvement was mirrored in the form of sharpshooter Dean Rock who hit 1-5, his goal a splendid second-half penalty which finally put the game to bed.

Rock and Scully showed the hunger which had been a hallmark of their game and were joined in that department by the brilliant Brian Howard who made one spectacular defensive catch and scored three magnificent points as well as the marauding midfielder Brian Fenton and the industrious Sean Bugler.

The fact that the scored two goals meant they had doubled their entire league tally up to then, that goal was scored by Lorcan O'Dell in the Round 1 defeat to Armagh two months ago.

Donegal started with Michael Murphy in their line up and that seemed to give his colleagues’ additional confidence as they came out of the blocks flying with Patrick McBrearty, his side’s  top scorer with 1-6, notching their goal in the 11th minute with a speculative lob over Dublin stand-in netminder Michael Shiel which was meant as a shot for a point but ended up raising a green flag.

Dublin though refused to panic and dominated proceeding from there to the break by which time, thanks to Scully’s major, had nosed ahead by 1-8 to 1-5. Declan Bonner, the Donegal boss will be disappointed that after notching 1-4 in the opening quarter, his side only managed a solitary point from there to the break.

Fenton and Tom Lahiff both dominated midfield with each striding through for well-taken  points while Scully’s goal could well prove to be a ‘We’re back’ moment in the Dublin season.

The Dubs continued to show up well on the resumption, but  Murphy's fisted goal for Donegal gave the visitors hope entering the final strait. With McBrearty picking up scores at will, they kept in touch but were never seriously threatening a comeback.

They must now meet and beat Armagh this weekend to ensure their divisional status while they also have a championship date with the same opposition looming further down the line.

They say Jack O’Connor is driven to win Sam Maguire every times he takes charge of his native Kerry but the one thing he likes to add to the mix is a national league title, thus winning a double in the one season.

Well, he’s just one step away from the league end of affairs after his side travelled to Armagh and came home with both points, meaning they automatically qualify for a league final appearance in two weeks’ time.

It took a substitute showing from talisman David Clifford to kill off the local challenge as his goal was the difference between the two sides at the end.

Kerry were always in command in this game and led by double scores at half-time but they could have been much further ahead except for wayward shooting.

The game had a touch of championship fervour about it in front of a 11,314 crowd at the Athletic Grounds who came looking for confirmation that the home side was on an upward trajectory this year.

While Tiernan Kelly opened the scoring, the visitors then shot the next six points to dominate and leave the large crowd wondering if Armagh’s early season form was disserting them.

When Jack Savage was black-carded and Kerry begun the second half with 14 men, it opened the door for Armagh to step up. Clifford replaced Killian Spillane at this stage, while Armagh introduced Stefan Campbell among a raft of personnel switches. Campbell’s point looked like it might be the start of something of a comeback but Paudie Clifford hit back with a Kerry point before his brother David received a brilliant  pass from the excellent Stephen O’Brien and with  keeper Ethan Rafferty tying himself up in knots, it was a straight forward pass into an empty net for the Kerry sharpshooter. Six points to the good, there was no way back though Rian O’Neill, Rory Grugan and Jarly Og Burns and Greg McCabe all added points and while the opportunistic Jason Duffy forced a goal-line save from Kerry goalkeeper Shane Ryan.

Kerry are into the Division 1 final but if you take that fact away, the rest of Division One is as clear as mud with teams going for a final berth and five involved in a possible relegation situation.

Mayo rather than Armagh are likely to join them in the final if the Connacht men beat resurgent Kildare in Leitrim (their home patch at the moment). Mayo will get there with a win as they beat Armagh, who have to travel to Letterkenny to take on Donegal.

If both Mayo and Armagh lose, it will mean four counties  will end up on seven points thus triggering scoring difference.

In Div 2, Galway are homed and dried  while Down are already relegated and will play in the Tailteann Cup this summer, except they somehow manage to reach the Ulster final,.

They will be joined in Division 3 by either Offaly or Cork, who play each other in the final game in O’Connor Park, Tullamore on Sunday.