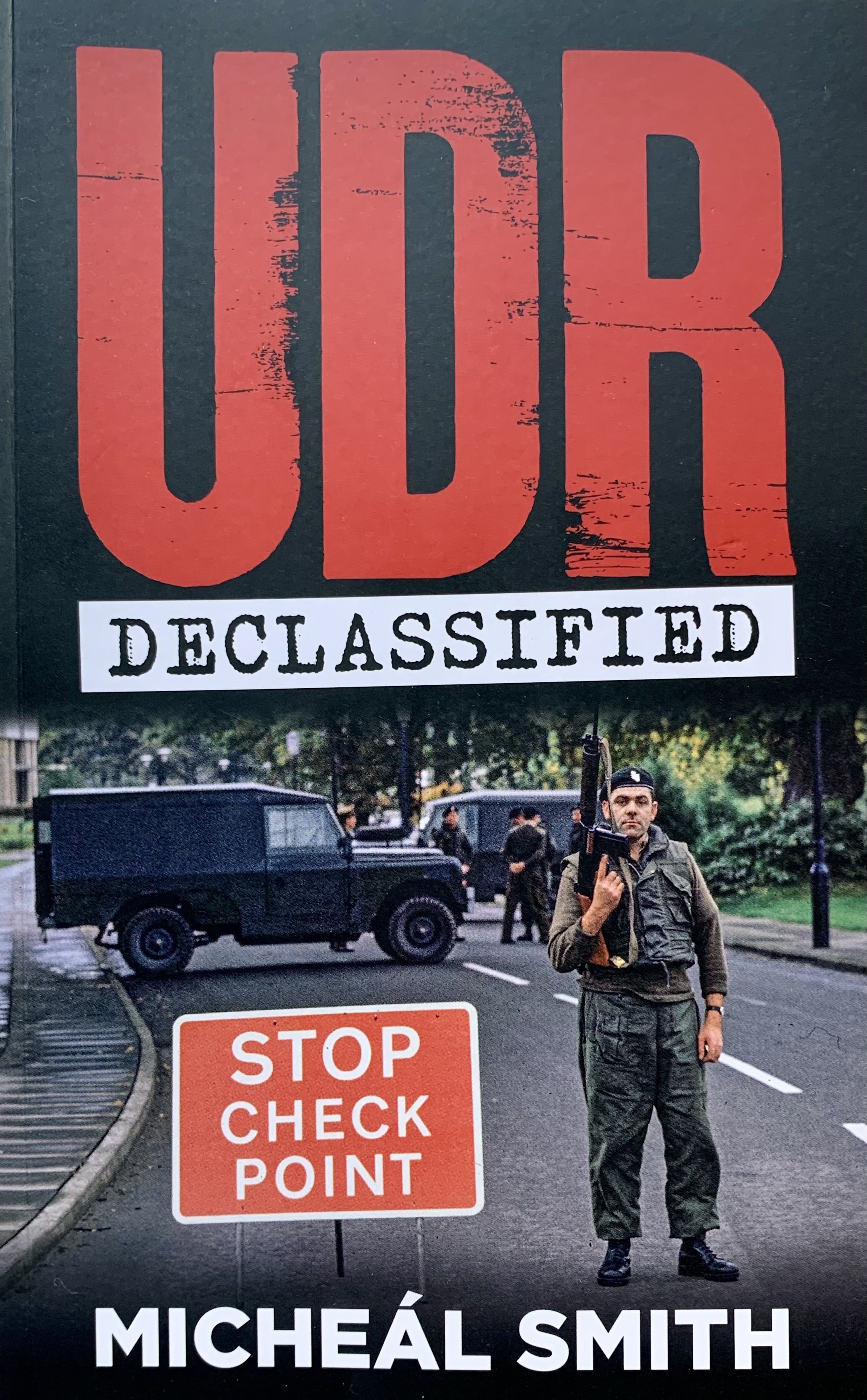 On 1 April 1970 the Ulster Defence Regiment formally took its place in the ranks of the British Army. The UDR was a locally recruited militia established by the British government following its disbandment of the B Specials the previous year. When it too was disbanded 22 years later it had achieved an even greater level of sectarian notoriety than the Specials.

Micheál Smith, who is an advocacy case worker with the Pat Finucane Centre and who previously worked as a diplomat in the Department of Foreign Affairs in Dublin, has just published "UDR Declassified" which is an account of the regiment and which looks at the “background to the regiment and the traditions from which it was born” …  “the experience of those who served in the UDR and acknowledge their losses; we also aim to show the range of illegal, collusive and murderous acts of some of its members …”

Smith describes the book as being “not a history of the regiment” but rather “an attempt to tell what Whitehall, Number 10 and the MoD had to say about the regiment in papers found among declassified files.”

The British government was warned of the dangers of establishing the UDR. The Ulster Special Constabulary - B Specials - had been a unionist paramilitary militia renowned for its sectarian and violent actions against the nationalist people of the North. It was, along with the RUC, the armed wing of the unionist state from the beginning of partition.

In 1969 the B Specials played a leading role in attacks on civil rights demonstrators and during the pogroms in Belfast which saw people killed, hundreds of Catholics homes destroyed, and thousands forced to flee as refugees. The Hunt report in October 1969 called for its disbandment and the creation of a new force.

Concern among unionists at the disbandment of the B Specials was assuaged by unionist leaders. Stormont Prime Minister Chichester Clark said on October 13th 1969: “The name and organisation of the Specials will change … our new security reserve will have the arms and other equipment it needs to be a highly effective defence force, not for the conditions of 21 for the 70s.”

The UDR was established on 1 January 1970 and became operational on 1 April. By the end of March 1,420 of the 2,440 recruits into the UDR were former members of the B Specials. In some areas whole platoons of the Specials joined the UDR en masse.

Within a very short time its reputation for sectarianism had exceeded that of the B Specials. In addition, as Smith acknowledges, “For elements of the British establishment the UDR was used as a surrogate ‘counter-gang’ … the Ministry of Defence (MoD) knew UDR weapons were systematically stolen and used to murder Catholics… the British were in fact well aware of what was going on and frequently referred to it internally as ‘collusion’ from the early 1970s.”

In the first ten years of its existence over 200 members of the UDR were convicted of offenses, many relating to sectarian murders. Smith reports how in 1976 Hibernia magazine had catalogued a list of more than 100 UDR soldiers charged with crimes. He also notes how an internal investigation into 10 UDR based at Girdwood barracks in North Belfast concluded that “up to 70 members of the battalion had links to loyalist paramilitary groups at some level, while it was also suspected that up to 30 members of the battalion had engaged in large scale fraud, claiming an estimated £30k - £47k for duties not carried out. This money was strongly suspected of being passed to the local UVF.”

UDR soldiers also formed part of the Glenanne Gang, which operated out of a farm in Armagh owned by James Mitchell. It was responsible for over 120 killings, and scores of injuries, including the Dublin and Monaghan bombs in May 1974 which killed 33 people.

Sometimes the involvement of UDR soldiers was down to the individual but frequently it was part of a structured process of control and collusion by elements of the RUC, the RUC Special Branch and the various British security agencies, including the Force Reconnaissance Unit, MI5 and MI6.

In a 1984 issue of Ulster – the UDA magazine – it listed 41 lifers belonging to the organization in Long Kesh. Twenty four of the forty one UDA lifers “came from the security forces, five from the UDR.”

Smith concludes that the UDR “functioned as a facility for loyalist groups within which paramilitaries had access to military training and equipment … there was also a steady traffic of weaponry and intelligence data from UDR personnel and bases into the waiting arms of loyalist paramilitary groups. This weaponry and intelligence was used repeatedly to kill Catholic civilians.”

He also states that Whitehall, the Northern Ireland Office and the MoD knew there was collusion both in weapons thefts and in murderous attacks but “combating such collusion was never a priority … For many people, the UDR was simply the B Specials with better weapons.”

UDR Declassified is a hugely informative account of a part of the conflict and of the role of the Ulster Defence Regiment, which generally gets scant mention today. The forensic examination of declassified documents by Smith and others has already resulted in similar publications, including Anne Cadwallader’s "Lethal Allies" and Margaret Urwins "A State in Denial."

Tens of thousands of such files still remain hidden by the British state and wait to be uncovered and examined. Some, like those relating to the killing of two children by plastic bullets  - Paul Whitters and Julie Livingstone - remain closed for another 40 years.

The reason for this and the rationale behind the British government’s amnesty proposals to end conflict related prosecutions is to ensure that the truth about Britain’s role in the war remains hidden.

Micheál Smith says: “The denial of access to history is a part of a continuum of British state efforts to obscure its colonial past – ‘to protect the reputation of the British state of generations earlier, concealing and manipulating history – sculpting an official narrative – in a manner more associated with a dictatorship than with a mature and confidence democracy.”

My recovery from Covid is proceeding slowly. I have no complaints about that. I am doing better than many other unfortunate folks. In fact my main symptom is lethargy. A profound ability to sleep around the clock, which is no bad thing. Sleep we are told is a great healer. I am really grateful for my vaccines and booster. And to our health workers. I credit them and my mask wearing and social distancing with my ability to dodge the Covid for almost two years. But just when I thought I was out the gap - whack - Covid sneaks up on me. Ach well…….

Incidentally, my acquaintance with Covid includes me having very vivid dreams. I have read that there is a Covid dream aspect to this virus. I can testify to this. My dreams all seem to involve my friend Gerry Kelly. The funny thing about it is that when I awake from the dream and then fall asleep again the dream picks up where it left off. It’s like a dream serial.

A lot of it seems to involve a very long train journey with me assisting Gerry to get away from whatever he is trying to get away from. He is clearly a benign heroic presence and I am happy to help him. The problem, as with many dreams, is that while it is vivid when I awake by the time the next day comes my dream is hazy and vague. Except for Gerry Kelly’s presence.

I listen to the radio a lot. I always have. I’m more of a wireless listener than a television viewer. Raidió na Gaeltachta, Raidió Fáilte, RTE Radio 1 and Lyric FM. And Radio Ulster. Covid has reunited me with the radio. It was just like being back in Long Kesh.

I am a long standing fan of John Bennett’s Sunday Club. His music selections match my tastes as do his dulcet tones as sleep beckons. Many a time he lulled me to sleep in my lonely cell.

When I was in Long Kesh Downtown Radio was a favored station, particularly Tommy Sands’  programs. The request shows were always a favorite, regardless of the station. The unsuspecting presenter would cause ructions in our wing after lock up when he or she read out “Best wishes to wee Mickey who is away from home for a while. Best wishes from Sadie, his everlasting sweetheart.”

Or “ Happy birthday Walter from your mammy. We are having a big party for you."