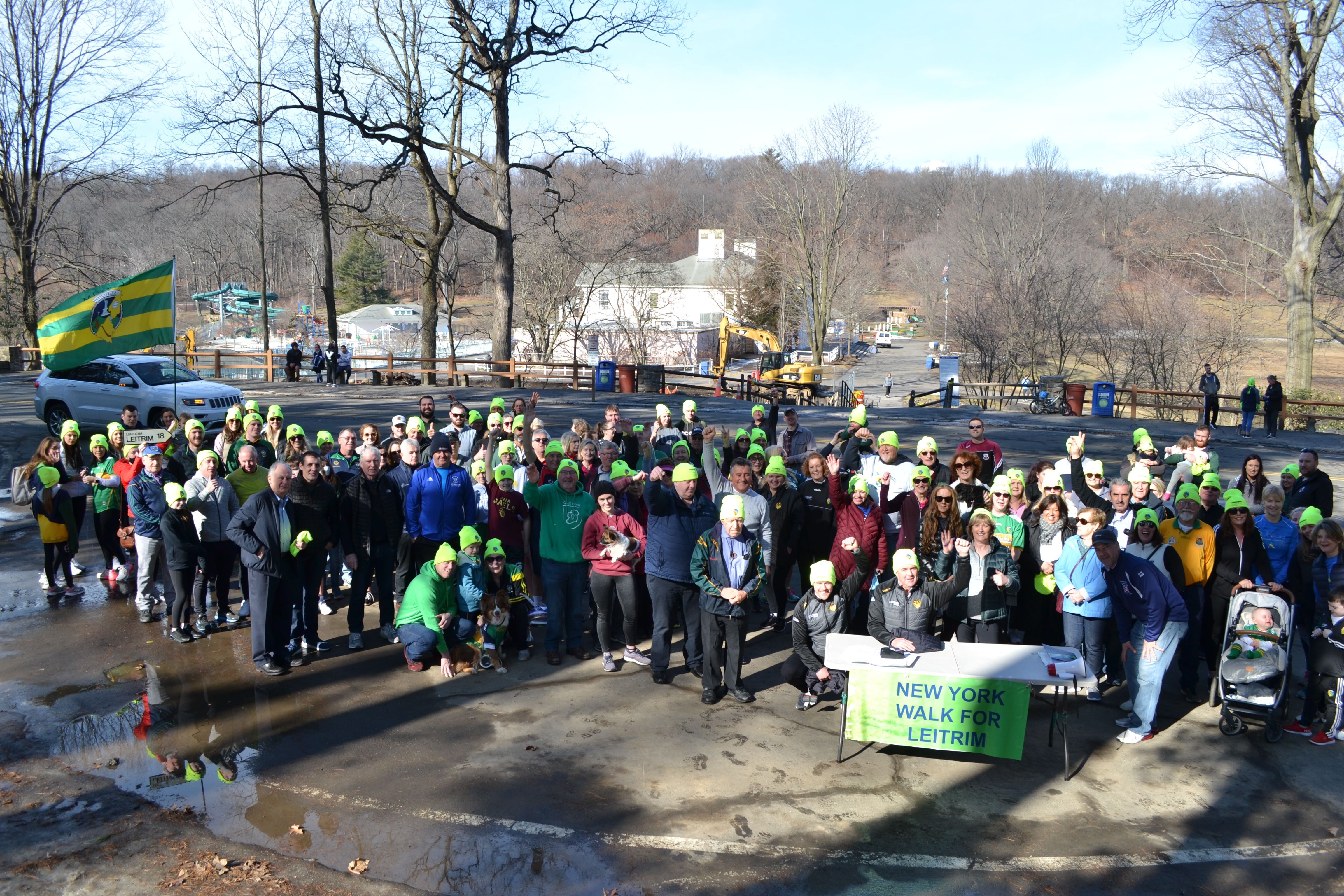 New York Leitrim supporters who marched in a fundraiser for the county team on Saturday in Yonkers.

Levins, McKenna, Quigg to be honored

With Spring breaking through it’s great to see that we are moving quickly away from Covid confinement. Yes it looks as if it’s back to normality on the Big Apple’s GAA landscape as the New York Minor Board will host their traditional annual dinner dance at the Villa Barone in Throgs Neck, on Sunday February, 27th, 3 to 7pm. This year the Guests of Honor are Paul Levins(Rockland), Michael McKenna (Shannon Gales) and Mikey Quigg(former NY GAA Development Officer)

Paul Levins was born in Collon. Co. Louth and grew up playing his juvenile football with Mattock Rovers, before progressing to Hunterstown Rovers for his adult career. The Levins family was deeply  involved in the club. It was not unusual to have four or five of the family on the playing field plus his father Sil and uncle Francie managing from the sidelines. Paul won a  Louth junior championship in 1993 with a combination of cousins and uncles being part of that success. Later in the year Paul landed in New Jersey, and stayed with his uncle Phil Cudden, another staunch GAA man. From there he went to Woodlawn, where he joined up with the Roscommon club, and went on to win a championship in ’95. After Paul hung up his boots, he became deeply involved in the club, at management and board level. He trained/managed the Rossies to a number of titles that included an Intermediate Championship and the “Knockout Competition” in 2009. Besides being a trainer, selector and delegate, Paul was also the Chairman from 2000 to 2004. Like most dedicated GAA folks, Paul’s efforts and enthusiasm were not just limited to his club, he held several positions with the New York Board, which he served with dedication and distinction.

In 2000 Paul married Catherine(nee Hughes), from Carrickroe, Monaghan, and now the Levins and their three children live  in New City, New York. Sean is a freshman at Sacred Heart University, Ryan is a junior at Clarkstown High School, and Emma is an 8th grader at Felix Festa Middle School. Naturally all three are deeply involved in Irish sports and heritage. In their early  days the boys played with Celtics before joining Rockland, and Emma is also playing football as well as camogie.  Paul continues to manage/train/coach at underage level and the extensive family involvement at under age level has seen the Levin family travel frequently to Ireland for competitions such as Feile, and all over the US for CYC Competitions. Paul has always been an inveterate GAA traveler, he hadn’t missed an All-Ireland in over two decades, until Covid clamped down. Currently Paul is Chairperson of the Rockland Club, which is the largest GAA club outside of Ireland, a tribute to many wonderful volunteers who work unselfishly for one of the greatest volunteer organizations in the world. Paul is a bricklayer who honed his skills in Ireland and England before joining Commodore Construction in 1998, and he’s currently a supervisor with the company. Paul and Catherine are partners with John and Breda Lyons in the River Court on Main, Bar and Restaurant, New City.

Mikey Quigg, recipient of the James O’Sullivan Award, the youngest of four siblings, was born in Swatragh, Co. Derry. From an early age the young Derry lad developed a huge passion and love for the GAA that would see him play, coach, and ref, both in Ireland and the USA.

Mikey began his sporting career playing hurling and football with the local Michael Davitt’s club, as well as the local schools St. Paul’s Kilrea and St. Patrick’s Magera. Success came quickly  as Mikey won an All-Ireland Vocational medal with St. Paul’s and an All-Ireland O’Keefe hurling medal with St. Patrick’s. His county career had also taken off as he lines out for Derry at under 16, 18 and 21. He continued his education and playing career at Ulster’s Magee University. During his six year sojourn there Mikey was active coaching and playing and would continue his adult career with the John Mitchell’s Glenullin club and also progressing to working with the development squads. Mikey also embarked on a very successful refereeing career, culminating with taking charge of the New York Senior Hurling Final.

In 2017 he began his association with the New York GAA as a Cul Camp coach and soon began working as a fulltime Hurling Development Officer, while simultaneously forming a last partnership with Simon Gillespie. His efforts were devoted to organizing games, developing coaching initiatives and promoting the Big Apple’s GAA social media channels. In 2019 he stepped into the role of Games Development Manager and in 2020 he began organizing virtual training sessions, online coaching workshops and webinars during  Covid lockdowns, ensuring that the promotion of Gaelic Games continued. Besides his coaching and teaching, Mikey played football with the Rangers and hurling with the Ulster club. One of the highlights of Mikey’s coaching career, along with Mike Kennedy, was winning the Native World Championship  with New York against London in Croke Park. He couldn’t have been prouder walking up the steps of the Hogan Stand with his dear friends. Presently he is working  in Ulster University, while also serving as the County Camogie Secretary, County Minor Coach, and a Provincial Camogie Referee.

Michael McKenna, the other Guest of Honor, is the oldest of eleven children born to  Lily and Billy McKenna, from Two-Mile Borris, Co. Tipperary. Michael  was a multitalented athlete, staring in hurling, football, running and handball. He began his Gaelic career playing hurling and football for the Moycarkey-Borris Club, winning minor, intermediate and senior titles in 1983, ’84 and ’85 respectively. Michael also won medals with Tipp at minor and under 21 levels as well. During his formative Michael honed his skill set at the famed Thurles C.B.S, Academy, a famed Munster hurling nursery. While Michael was burnishing his hurling skills, he was also ensuring that his fitness was on a par as he ran track and cross-country with Moycarkey-Coolcroo and the C.B.S. school. In 1985 Michael was part of the Tipperary  Coaching Initiative Program that began to develop and promote hurling in schools. In 1986 Michael headed across channel, joining the Sean Tracey’s club in London. A decade later he headed to the Windy City, Chicago, where he had a stellar career with the legendary Cu Chulainn club. Michael’s next move was to the Big Apple arriving there in 2012. He immediately joined the Shannon Gaels club, and began coaching players from u7 to u 17. He was a selector on the first u14 Feile hurling team that played in Ireland in 2017, and again in 2018. Michael’s coaching was soon paying dividends as now young American-born players were progressing to hurl at adult level. Not that long ago such a scenario was almost unthinkable, the prevailing wisdom that a hurler had to be bred in a hurling stronghold, preferably Munster. Michael has always been a man who has shunned the spotlight, basically letting his actions speak for themselves, and truly they have spoken volumes. Meanwhile he won’t be able to avoid the limelight or center stage as he’s a very deserving Guest of Honor for the New York Minor at the Villa Barone on February 27th. Celebrating the occasion with him will be his wife Elizabeth, who Michael says is a staunch hurling fan from Puerto Rico.