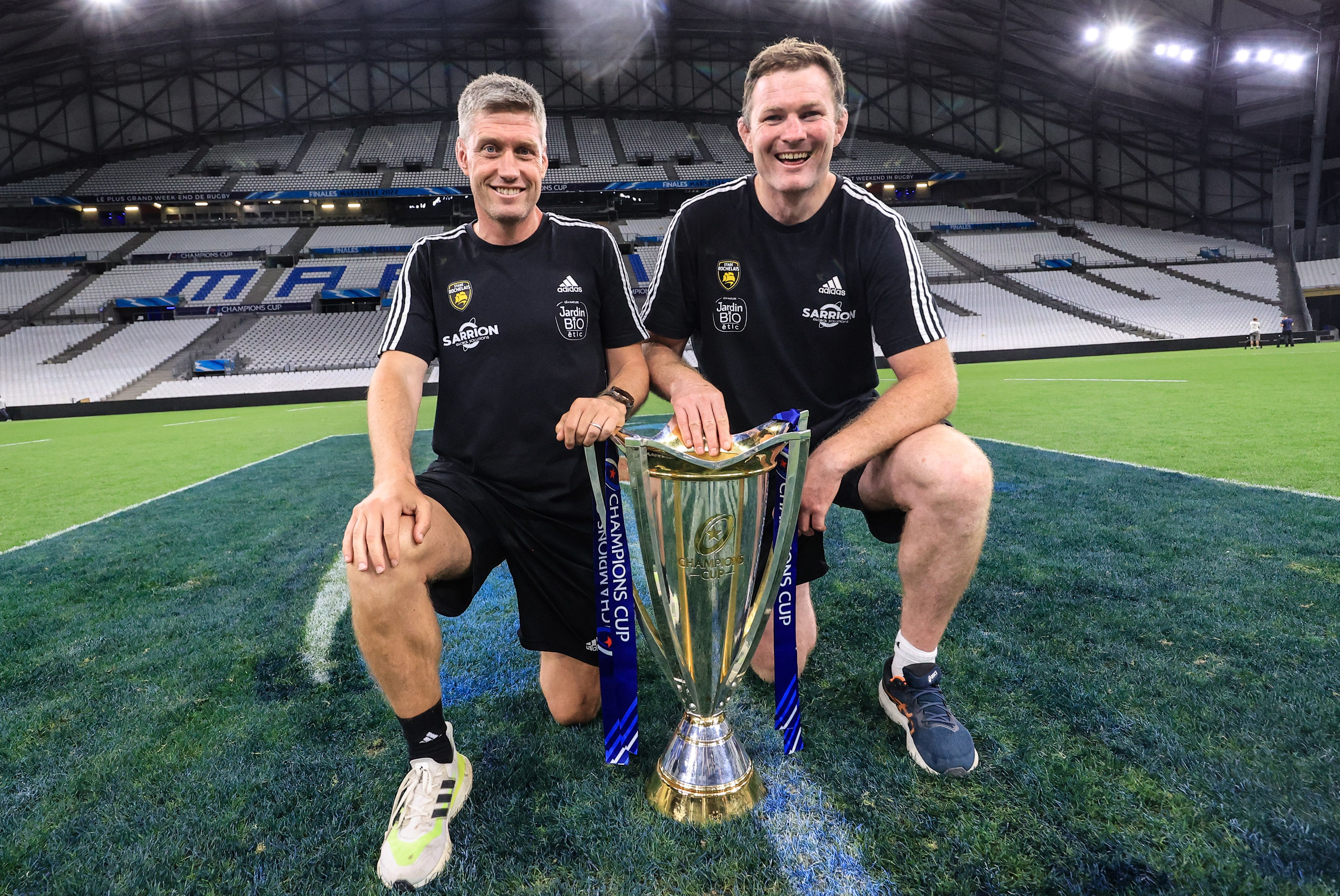 Ronan O’Gara has confirmed that he is “extremely happy” to stay at La Rochelle amid stories that he was being considered as Eddie Jones’s replacement for the England coaching job after the World Cup in 2023. However, on Tuesday Jones was fired by the RFU.

O’Gara essentially ruled himself out, but said late last week, “I had contact from the RFU. It’s England. If you get offered a gig like that – and I wasn’t, to be accurate – then you have to give it due consideration until such time as someone else gets the job or you officially eliminate yourself from the race. That was done in a very amicable conversation this week; ‘I’m not sure if I am making your job easier or harder, but… etc etc’ ‘No hard feelings, we may meet again.’”

In an earlier interview, O’Gara said, “I don’t know about a shortlist, but I have spoken to a few people. I suppose it’s a possibility but I don’t know where I am in the pecking order. I think England are a team that can win a World Cup, every World Cup cycle. They are exactly the jobs you look for because you want to test yourself at the highest level.”

O’Gara, who is currently serving  a ten-week ban and a €20,000 fine imposed by French Rugby authorities, coached La Rochelle to beat Leinster and win in the European Cup last May.

The former Munster and Ireland star said, “I am in the first year into being a head coach at La Rochelle and obviously winning a European Cup final, that’s the stuff of dreams. But you probably want to have a  very good reason to leave. I don’t have that. I am obviously in decision mode between now and Christmas because that’s what happens with coaches. They always want to be done six months before the last year of contracts. That would be next season, I would be in my last year of my contract here. So I have to decide if I want to stick to club rugby or if there are options to go to the Test game.”

His former Crusaders boss Scott Robertson and Leicester Tigers coach Steve Borthwick were believed to be in the frame to replace Jones before Tuesday’s firing.

Former Kerry and Aussie Rules star Tommy Walsh will be back where it all started with his home club Kerins O’Rahilly’s on Saturday next when the Tralee club play Newcastle West in the Munster club senior football final at Pairc Ui Rinn in Cork. Walsh’s last major provincial club involvement with his home town club was in the Munster quarter-final against Clonakilty back in 2009. A few days after winning that game 21 year-old Tommy headed to Australia when he joined the  St Kilda club. Injuries curtailed Walsh’s Aussie Rules career and he returned home, but failed to command a regular place on the Kerry senior team. But of course in the GAA it’s all about the club and after helping Rahilly’s win the Kerry club championship last November, Walsh is now anxious to make up for missing the Munster club final defeat of 13 years ago when the Tralee club lost by a point to Kilmurry-Ibrickane of Clare.

Derry City, who finished second to Shamrock Rovers in the League of Ireland season just ended, are already planning for 2023 with the signing of striker Colm Whelan from UCD. The 22-year-old former Republic of Ireland under 21 international was prolific during his time with the students, scoring 44 goals in 66 games, before a cruciate ligament injury in the summer ended his season. Prior to the injury several clubs were tracking Whelan, including Shamrock Rovers and English League One club Lincoln City. He is expected to be fit for the new season as he links up with the FAI Cup holders. Derry manager Ruaidhri Higgins said: ‘‘We are delighted to welcome Colm to the club. He is a player with an extremely bright future in the game.’’

Officials in Croke Park are standing over their decision to refuse an application from Mayo to wear rainbow-coloured numbers on their jerseys for next year’s National Football League. Mayo sought permission from Croke Park to make the changes to their playing strip for the League. The move was designed to be part of a show of support for the LGBTQ+ community and was the result of an approach from Mindspace Mayo, the county’s charity partner. However, it’s understood that while the GAA are happy to consider supporting any campaign, and would be open to the idea of players wearing rainbow laces or armbands, they consider playing gear to be “sacrosanct” and that it should not be interfered with. In 2015, the GAA refused referee David Gough permission to wear a rainbow wristband in Croke Park in the build-up to the referendum on same-sex marriage. At the time a GAA spokesperson said: “It’s a black and white issue. The association is apolitical. Any member is allowed to have their own political views or opinions outside, but Croke Park is not the place to make political gestures. We have been very consistent on this issue.”  Mayo’s first National League game is against Galway on Jan. 28. More recently players from Mayo and Tipperary wore rainbow laces in their All-Ireland semi-final meeting in 2020.

Galway GAA Chairman Paul Bellew says the county make no apologies for their spending on the preparations of their inter-county teams in 2021 at €2,161,497, a record for any county in one year and the first time the €2m barrier was passed. Bellew said: ‘‘The figures came out last week and we knew what was going to happen. We report the figures as they come in, but those figures include everything attached to six inter-county teams. We played 49 games last year between the six teams, football and hurling. We won the minor football, we got to the All-Ireland football final. Our three hurling teams lost to the eventual All-Ireland champions by a combined total of six points. There are not too many counties that can say that. We make no apologies for the spend. It all goes to the players. A lot of it is mandated in terms of gear and expenses.’’

Bellew was speaking at a press conference to confirm Galway GAA’s five-year sponsorship extension with Supermacs, a deal worth €2.25m up front to Galway but could yield a further €1m in performances if the county teams win enough All-Ireland titles in that period.

Former Dublin footballer Philly McMahon has revealed details of the new television show he is working on that will see inmates in Mountjoy Prison in Dublin play a team of prison officers. The series is due to be aired by RTE next spring. McMahon said: “We run a leadership program in there, and right now we are doing something interesting, a series called “Mean Machines,” which should be available by March or April where the prison guards will play the prisoners. We are basically trying to show society that these are people who have made mistakes but what is really important now is what they do in the future. It’s also for young people to look in and say ‘I don’t want to go down that route’ or ‘I’m going that route but after watching that series I’m not going to do it/’’ So it’s a diversion type series but also to show the underlying issues why these lads have gone this route in life. I think it’s crucial society sees this because some of their stories are incredible.”

Tipperary All Ireland-winning coach Eamon O’Shea is back in inter-county management, but his new role will be a less demanding than when he was helping his native Tipperary to a couple of All-Ireland titles. O’Shea will take charge of a Galway development squad largely made up of junior players, who will play in a Connacht league in January which will also include teams from New York, Mayo, Roscommon, Leitrim, Longford and Sligo. The competition will be run off over three days in early January at the indoor Connacht GAA Air Dome in Bekan in County Mayo. O’Shea was key member of Liam Sheedy’s management team in Tipperary when they won MacCarthy Cup in 2010 and 2019 and Eamon guided Tipp to win the Munster final in 2015 when he was manager.