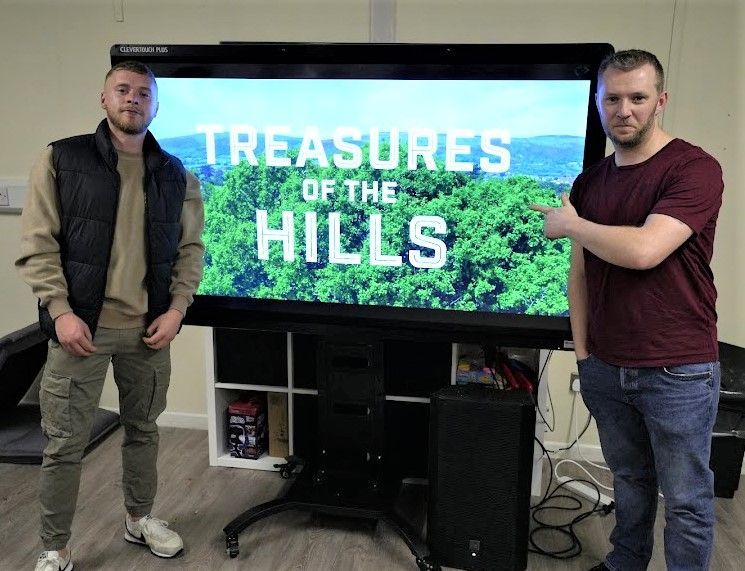 Aaron and Martin at the Rewilding Launch.

When I arrived at Glór Na Móna last week for the launch of The Black Mountain Rewilding Project the place was packed.

Tommy Morgan started the evening’s event with a few warm words of thanks and appreciation for the work of Aaron Kelly and his co-workers, particularly film maker Maírtín Keenan.

They are all local young people working voluntarily on our wonderful Black Mountain which overlooks Belfast.

Like people of my age, Aaron spent his childhood playing on the mountain, exploring its wildness and learning about the wildlife which call it home. But Aaron took his mountain rambles to another level. Starting off with litter clean ups he discovered a pine marten, a fairly rare native Irish mammal and that discovery sparked off a series of wildlife surveys of the mountain.

Aaron is knowledgeable and passionate about the unique biodiversity of the Black Mountain. He is working with landowners and farmers to improve and preserve the habitat of foxes, hares, pine martens, lizards, badgers, owls, wild birds including hen harriers and buzzards and moths and butterflies.

That work includes planting native trees to re-wood the mountain slopes to provide homes for our mountainy wild life.  It’s all there on our doorstep amid flora including wonderful wild flowers like bluebells, mountain streams and wee patches wetlands.

The Treasures of the Hills film was the centerpiece of the Glór na Móna event. It took Bayview Media two years to make and it is absolutely a must see documentary. Beautifully shot and produced. I’m tipping it as a potential prize winner for films of its kind. It’s on youtube https://www.youtube.com/watch?v=ZXA6ORO8Ww8  and I posted it  on my social media platforms. It will also be available for screening in local schools and the community and youth sector.  So let’s get behind Aaron and his friends and support them in their work. Saving the planet starts where you are. For Aaron that means Sliabh Dubh. Aaron can be contacted at BlackMountainwildlifeproject@outlook.com.

Bliain Úr faoi Mhaise Daoibhse. A very happy new year to all readers of this column and to Belfast Media supporters. Congratulations again to Andersonstown News on your 50th Anniversary. A great achievement. None of us know what 2023 will bring but we can be sure it will be interesting. May it also be good to you all and to your families. Beirigí bua.

THE GOOD FRIDAY AGREEMENT AND THE FUTURE

April 2023 will mark the 25th anniversary of the Good Friday Agreement. A month later many will also celebrate the anniversary of the referendum in May 1998 which saw the vast majority of people of the island of Ireland vote in support of the Agreement. I don’t think it is putting it too strongly to describe the Agreement and the referendum as probably the most important political events of our time in Ireland.

The twists and turns from April 10th 1998 to now have been many. Currently the institutions are not in place due to the intransigence of the DUP, the machinations of successive Tory governments and unionist efforts to force the EU and Irish government to scrap the protocol. However, despite these difficulties the success of the Agreement is that there are many people alive today because of it. It brought an end to almost three decades of war. It is seen by many internationally as an example of how deep rooted conflicts can be resolved.

Those who still seek to use violence or threaten the use of violence represent the past. So do the securocrats who manipulate the groups involved. They should end their actions and go away.

Of course, the Good Friday Agreement isn’t a perfect agreement. It was after all a compromise between conflicting political positions. It is also a fact that crucial elements of the Agreement have still not been implemented by the British and Irish governments, including a Bill of Rights for the North and the British government’s refusal to establish an inquiry into the murder of human rights lawyer Pat Finucane.

The reality is that the Tory government has no real investment in the Good Friday Agreement. In fact, its policy is to emasculate the human rights elements of the Agreement.  This is evidence in its refusal to fulfill its commitments and obligations to deal with the legacy of the past and the concerns of families bereaved during the conflict.

The Sinn Féin leadership went into the negotiations knowing we would not achieve all of our objectives given our political strength at that time. However, we had our own red line issues. For example; we had already decided to compromise on the need for a single unity referendum by holding two referendums North and South on the same day. Our leadership decided that the policing and justice issues should be dealt with in a separate negotiation – the RUC had to go. In our view a Commission could best deal with this issue.

One of our key objectives was to get rid of the Government of Ireland Act. I am pleased that we succeeded. Then crucially, there is the issue of consent. Previously this was interpreted as referring specifically to the consent of the unionist majority defined in Article 4 of the Sunningdale Agreement as “represented by the Unionist and Alliance delegations.”

The Good Friday Agreement is clear. Constitutional change requires the consent of a majority. This is the democratic position. Of course, the sensible goal for all democrats must be to persuade the largest number of people to vote YES. That is obvious and common sense.

It is also important to understand that the Good Friday Agreement is not a settlement. It never was. It doesn’t pretend to be. It is an agreement to a journey without agreement on the destination.  The promise of the Agreement is for a new society in which all citizens are respected; where the failed policies of the past are addressed; and where justice, equality and democracy are the guiding principles.

It also provides for the first time a peaceful democratic pathway to achieving Irish independence and unity. This was crucial and central to the long effort to provide an alternative to armed struggle as a means to advance these legitimate goals.

From a Sinn Féin perspective, the efforts to reach that position involved prolonged engagements with John Hume, back channel communications with successive British governments, with Fianna Fáil led administrations, ongoing outreach to Irish America, and subsequently the White House, as well as attempts to outreach to elements of unionist and loyalist opinion.

To their shame no Irish government has ever produced a strategy to build a new and inclusive Ireland and give effect to Irish unity. The Good Friday Agreement provides the mechanism to achieve this. The absence of Irish government planning is indefensible and incredibly short-sighted. There is no excuse for this.

·   We need the full implementation of the Good Friday Agreement

·   The setting of a date and planning for the referendum provided for in the Agreement.

·   The Irish government to establish a Citizen’s Assembly or series of such Assemblies to discuss the process of constitutional change, as well as the measures needed to build an all-Ireland economy, a truly national health service, education system and much more.

·   The Irish government also has a responsibility along with the rest of us to be totally committed to upholding and promoting the rights of our unionist neighbors. The protections in the Good Friday Agreement are their protections also. This is their land, their home place.

All of this makes sense. Very few countries get a chance to begin anew. Ireland, North and South, has that chance. Most leaders would embrace this, welcome it, be excited by it and seize the opportunity. But not successive Irish governments. Political parties which have enjoyed power in the southern state since partition don’t wish to give up that power. That’s why the former Taoiseach Micheál Martin refused to establish a Citizen’s Assembly.

Irish Unity will profoundly transform the political landscape. At the core of the progress we have already made is dialogue. Dialogue - talking and listening to each other - is the key to resolving conflict. Dialogue is key to building an inclusive society. Yes, there will be many challenges but there will also be many opportunities. I look forward to continuing the process of change in 2023.