Home News Stretched Beyond The Limit 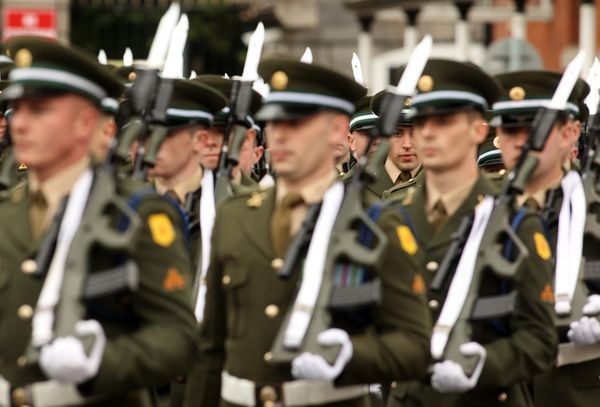 The Irish Defence Forces lack the personnel to carry out all functions RollingNews.ie photo

Stretched Beyond The Limit

And they will be reducing the range of services provided the State amid the worsening staff crisis, Minister for Defence Simon Coveney has said.

According to an Irish Times report, this will see the military performing fewer non-military tasks, known as Aid to the Civil Power (ATCP).

This process has already started with plans to end the practice of soldiers guarding the high security Portlaoise Prison in County Laois, the minister said.

Minister Coveney, according to the Times report, was speaking at the annual conference of the Representative Association of Commissioned Officers where he was told that military officers face impossible demands due to the large number of trained personnel leaving the defense forces.

Earlier this year the Irish government announced plans to increase the size of the Defence Forces to 11,500. It is currently has just over 8,000 members, including those in training.

The number should be 9,500, but all branches of the defense forces have been losing personnel, largely due to what is seen as inadequate pay and working conditions.

Coveney, according to the Times, conceded much has to be done to address retention, especially at the rank of captain, but he pointed out that the officer corps overall is actually above establishment strength.

Coveney said the Defence Forces have previously been tasked by the State with temporary roles which have become permanent. “We need to review that and we are,” he said.

The man hours it takes to guard Portlaoise Prison is similar to a medium size overseas mission, the minister said.

Defence Forces Chief of Staff, Lieutenant General Sean Clancy, said significant progress had been made in reviewing Defence Forces ATCP tasks which “should result in reducing the burden on unit strengths and capacity.”

He told RACO members that Ireland will contribute a mechanised company, numbering 138 troops, to the new EU Battlegroup structures starting from 2025. It is also offering ten officers and noncommissioned officers to the force headquarters Strasbourg, France.

Separately, the Times reported, Ireland will commit three military personnel to the EU military training mission for Ukraine in Strausberg Germany. These will be in addition to plans to send demining and bomb disposal experts to the mission.