Home Should the doctor prescribe fact or fiction? 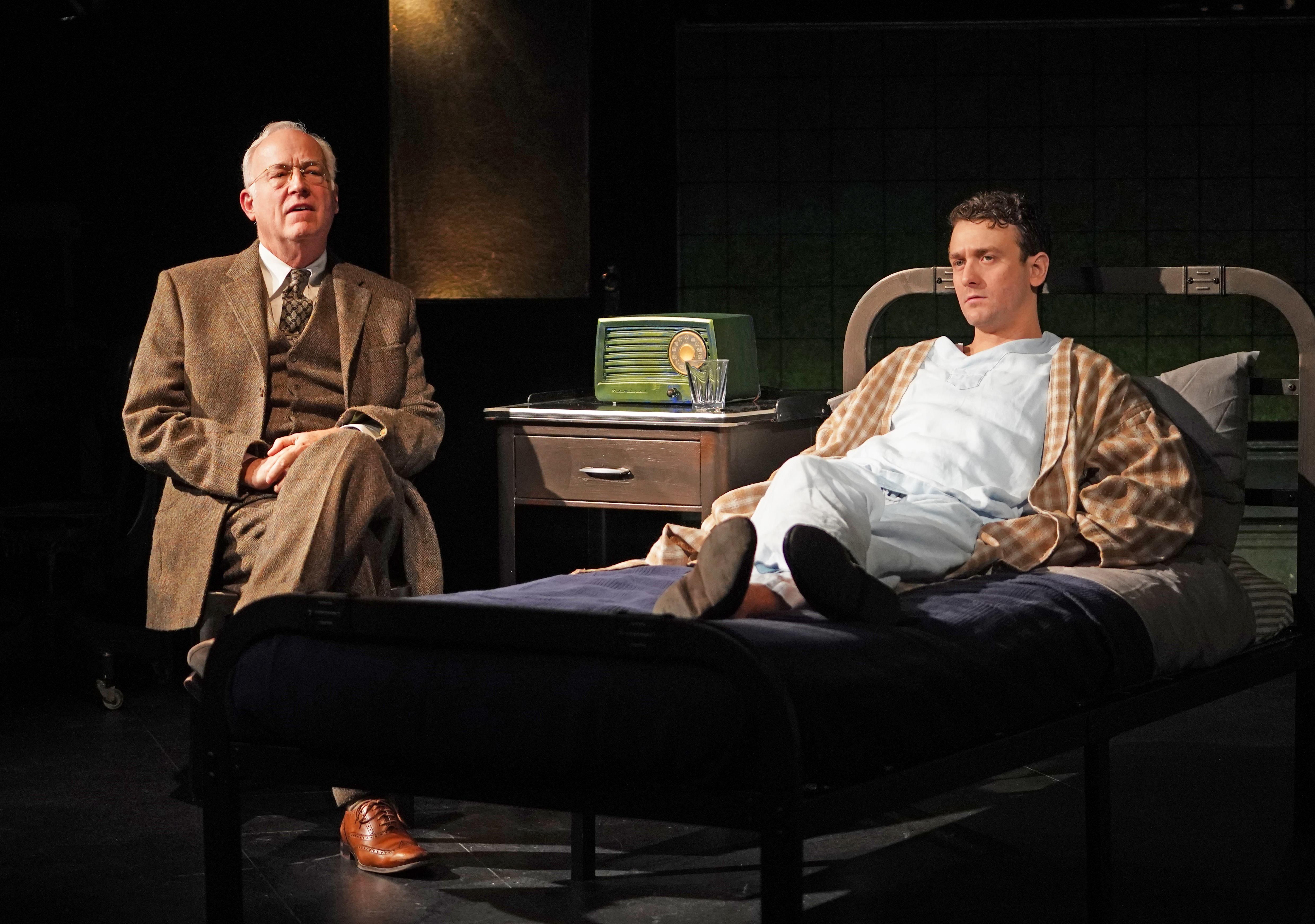 Reed Birney is Dr. Philip Cotton and Ephraim Birney is Chester Bailey in “Chester Bailey” at the Irish Repertory Theatre through Nov. 20. [Photo by Carol Rosegg]

Should the doctor prescribe fact or fiction?

In 1962, President John F. Kennedy declared in a speech at Yale that “the greatest enemy of truth is very often not the lie—deliberate, contrived, and dishonest—but the myth—persistent, persuasive and unrealistic. Too often we hold fast to the clichés of our forebears. We subject all facts to a prefabricated set of interpretations.”

Sixty years after this speech, and 77 years after the end of World War II, we are still taunted by the persistence of these discomforting thoughts, and the treacherous ideas which cleverly culminate in Joseph Dougherty’s “Chester Bailey,” a drama that plays devil’s advocate to truth’s lesser evil, directed by Ron Lagomarsino and starring Reed Birney and Ephraim Birney at the Irish Repertory Theatre, in an extended run through Nov. 20.

In spitefully ironic timing for Veterans Day, “Chester Bailey” is a sharp and desolating take on historical revisionism through personal memory, a hypothetical case that dabbles in the ethical debacle of how we remember ourselves, and entertains the leniency of lies.

Set in a psychiatric hospital on Long Island in 1945, and staged on a rotating set with equally revolving perspectives, the plot is relegated to the monologues and dialogue of Dr. Philip Cotton (Reed Birney)—a Manhattan psychiatrist specializing in veterans with shellshock, whose personal affairs are tainted by divorce and adultery—and his reluctantly assigned patient, Chester Bailey (Ephraim Birney).

Chester, a boy from Brooklyn eager to test his mettle and enlist before the war’s end, honors his parents’ demands to defer, albeit with some humiliation, to a Reserve post in the Brooklyn Navy Yard; until a sudden and random assault at work by a madman leaves Chester bedridden, maimed and mutilated for life. As his future descends into a despair beyond imagination, Chester lapses into an alternative narrative and vividly re-fabricates the facts of his own reality, involving a succession of auspicious miracles and fantasy fulfillment, the delusions of which Philip attempts to deny and dissuade. Philip resolves to bring Chester to acceptance; yet as unbearable miseries fester in Chester’s real life, too cruel to face, Philip debates whether the right prescription for his patient is fact or fiction.

The themes of “Chester Bailey” are expectedly heavy, as the characters’ conflicts pertain to the validity of reality, the responsibility of factualness, and a Miller-like potency toward national duty and obligation, yet coupled with a backhanded disillusionment: the sins of patriotism and the survivor’s guilt of sacrifice.

While innately nostalgic, to infer that this historical drama has liminal “MAGA” undertones, or is at least a critical prediction of Trump’s presidential phenomenon, might be a reach, given that the play’s two narrators—both white men of deliberately diametric backgrounds—reminisce the facts of life for the “Greatest Generation” with a certain forlorn, unabashed acrimony and latent horror. Much like a Miller masterpiece, “Chester Bailey” examines the meaning of the “American Dream,” under the threat of taking away the dream.

The dramatic arch of the play reads much like a Greek tragedy (especially its divine retribution for disloyalty), told through the idioms and scenes of Arthur Miller, had such scenes then been transcribed by Peter Shaffer. If uncanny parallels to Shaffer and Miller had been perceived in Dougherty’s postwar drama, concerning moral imperatives to national service, and socio-philosophical doctor-patient relations, one wouldn’t be alone in thinking so. Nevertheless, Dougherty’s text does not stumble over his predecessors, as the writing is excessively fresh; with an impeccable balance of ultra economized true-to-life dialogue, provocative monologue, and ever-subtly, exquisitely placed prose that leave audiences unanimously breathless, to the last devastating word.

The interlocking unity in the machinery of this production, each theatrical bolt and rivet from direction to design, was faultless. While the plot’s ordinary structure might’ve been obvious in a lesser production, it was made oblivious to this rapt audience, entranced by the fine-tuned pace and diamond-cut performances.

In truth, the astonishment of the evening is in viewing this father-son cast, Reed and Ephraim Birney, achieving extravagance on stage absolutely. The Birneys have perfected their respective roles with a precision and intimate tenderness inconceivable to another. Reed and Ephraim Birney are architects of emotion, bringing purpose and true empathy to every second between themselves, with not a moment wasted. They were born to perform together.

In the center of upstage is a door to Chester's hospital suite with a long glass frame. The glass is obscured, smeared, unclean, with the vaguest assumption of light behind it. An aged quotation is remembered from William Blake: "If the doors of perception were cleansed, every thing would appear to man as it is...infinite." Infinitely clean?

In the thrilling demise of “Chester Bailey,” one is left to ponder whether human nature can perceive infinite cleanliness--of realities, objectivity, and truths. The set leaves its audience with an unsettling question, that if we could peer into Pandora's box, would we keep a lid on it?

If one could see all the truths of life swept behind the door, who of us will keep it shut, and who will open up, and pass through?