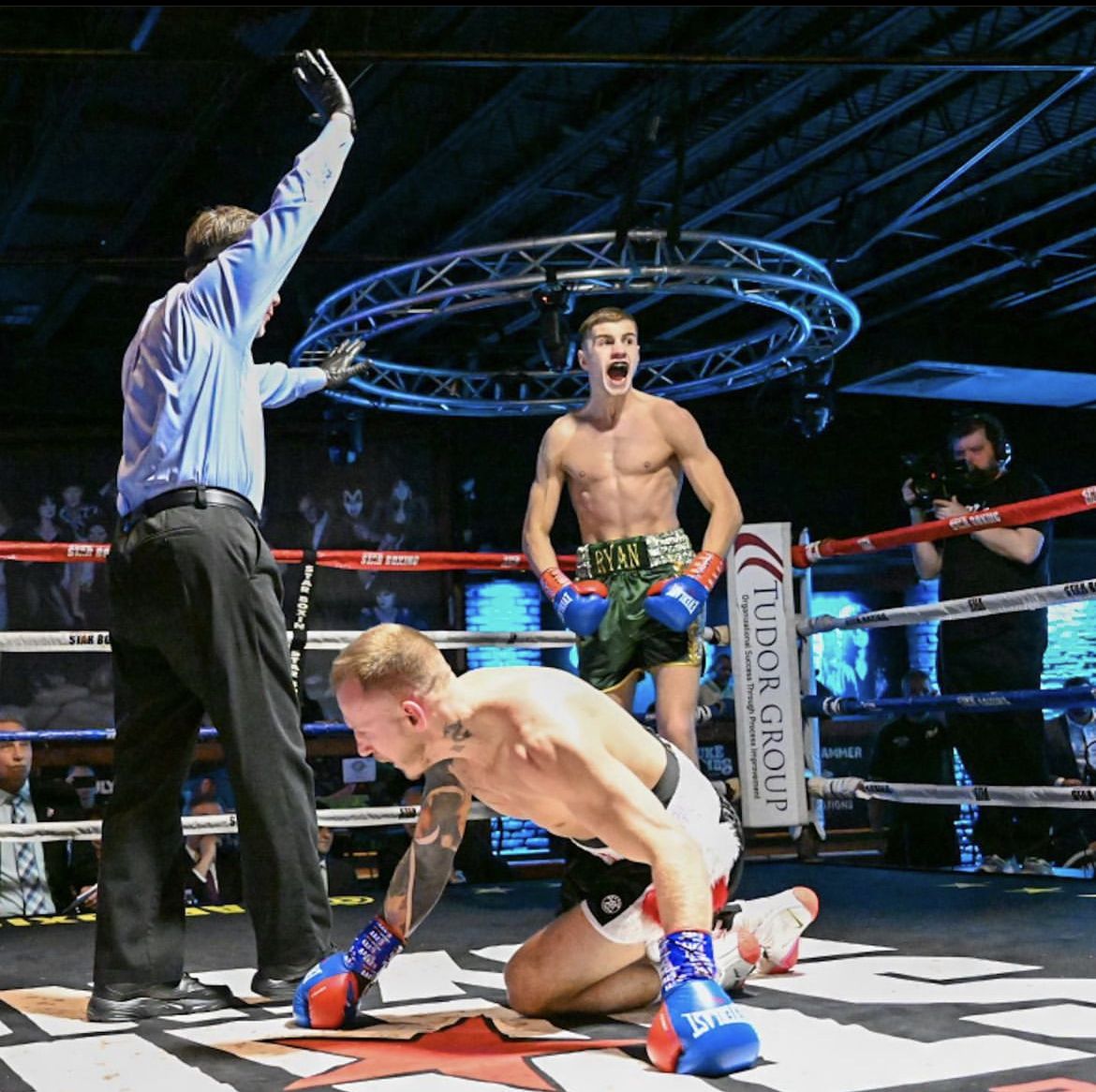 Ryan O’Rourke had Andreas Maier on the canvass twice early in the first round.

Two overhand rights and a quick barrage did the business for "The Silent Assassin" on Long Island last week Thursday. And by the next night, Ryan O’Rourke was on a plane back to Dublin after upping his record to 9-0 with 2 KOs following the swift stoppage of Germany’s Andreas Maier at 2:53 of the first round at Mulcahy’s Pub and Concert Hall in Wantagh.

A lanky six-footer fighting in the 140-pound super lightweight division, O’Rourke had Maier on the canvas twice early in their scheduled six-rounder. The 23-year-old closed the show before the first bell with a fusillade of punches before the end of the opener.

“I was expecting a lot tougher fight to be honest,” O’Rourke told the Echo from Dublin. “He’s kayoed some prospects and been in the ring with contenders.”

Trained by his father Steven, a former pugilist, O’Rourke was fighting States-side for the second time since signing with Joe DeGuardia’s Star Boxing -- the longest running and most consistent boxing promotional company in New York. He scored a unanimous points decision over Faycal Rezkallah in Schenectady, New York, last April.

He hopes to be back in New York “as soon as possible. Hopefully in the New Year.”

Tony Palmieri of the Long Island-based Star Boxing said they are really excited about what O’Rourke brings to the ring, adding that they’d seen a step up in his skills with each fight.

Palmieri touted the Dubliner’s outstanding left jab, a formidable weapon that he uses to set up his right hands.

Connor “The Kid” Coyle has a new challenger for his North American Boxing Association [NABA] middleweight title on Dec. 11 at the Caribe Royale in Orlando.

They meet on the first night of the World Boxing Association’s [WBA] Centennial Convention, which runs through Dec. 14, at the Caribe Royale.

Coyle, who trains out of Pinellas Park, FL., captured the NABA belt in May with a tough points decision over Antonio Todd. He was scheduled to meet another fellow unbeaten fighter, Felix Cash, for the WBA Intercontinental title, at London’s O2 Arena last month. But the card was cancelled after main event participant Conor Benn failed a drug test.

“After the disappointment surrounding the cancellation of Connor’s fight in England, we wanted to find a good opportunity,” said Coyle’s promoter Jody Caliguire of Fire Fist Boxing Promotions. “The WBA Centennial Convention is a great event and Connor loves fighting at the Caribe Royale because he’s got a big fan base in Central Florida. He’s already back in the US preparing with Jim McLaughlin for this fight and is planning to put on a great show December 11.”