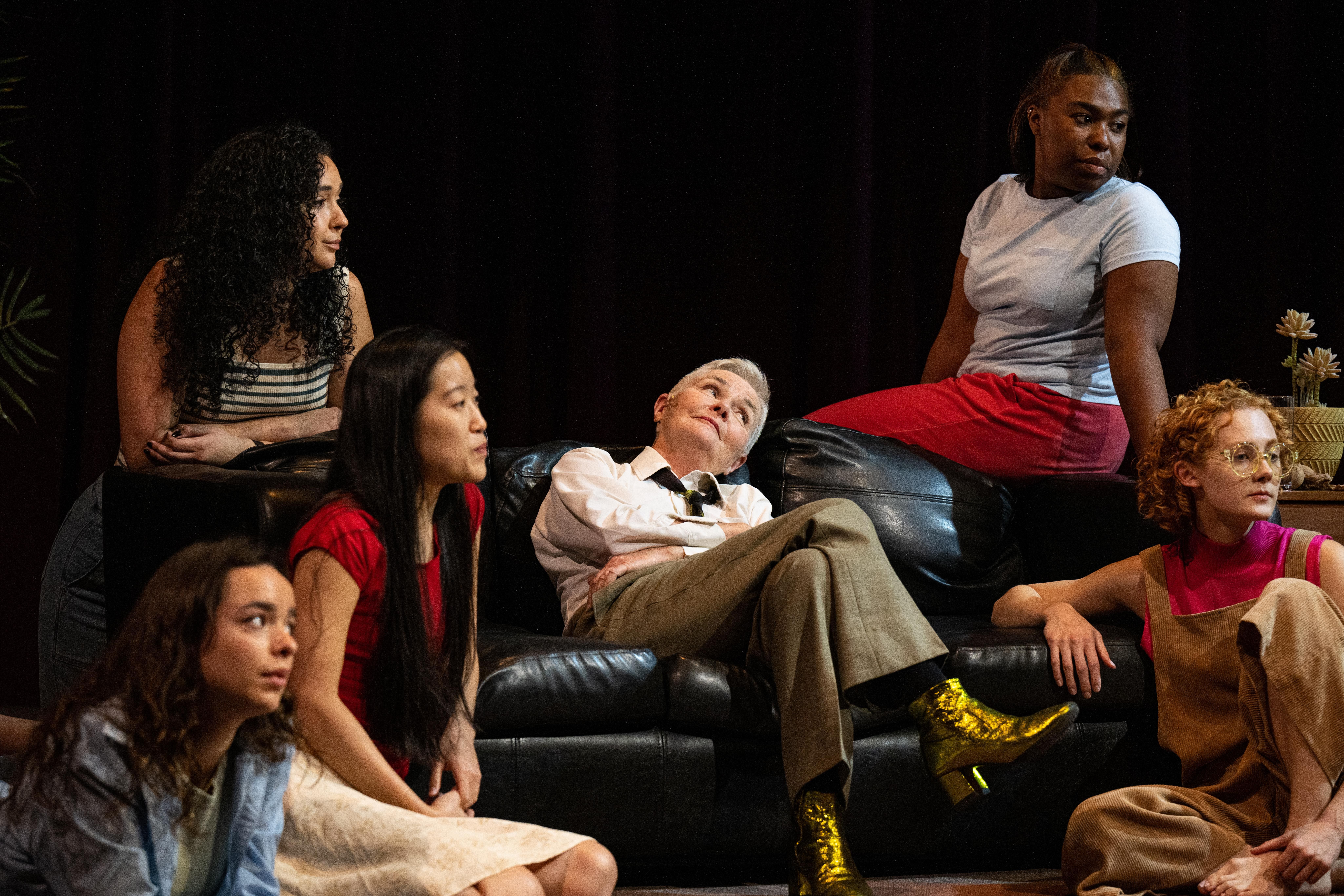 Playwright Gina Moxley, center, in “The Patient Gloria,” which is performed by Dublin-based Pan Pan Theatre and directed by John McIlduff at St. Ann’s Warehouse in Dumbo in Brooklyn. PHOTO BY TEDDY WOLFF

It is a disconcerting feeling to be reminded that progress hasn’t been made; when we’ve taken one great step back, that the politics behind our art remains retro for so long that it’s cool again. From this effect, American audiences may feel ambivalent and impatient with the feminist throwback of Gina Moxley’s “The Patient Gloria,” a Baby Boomer faux pas presented at St. Ann’s Warehouse through Dec. 4.

The play derives itself from the 1965 clinical psychology film “Three Approaches to Psychotherapy (The Gloria Films),” in which real-life patient Gloria Szymanski (Liv O’Donoghue) is interviewed by three psychotherapists, whose recorded sessions concerning guilt and desire are scrutinized and ultimately exploited. Under Gina Moxley’s guise of masculinity, psychotherapists Carl Rogers, Fritz Perls and Albert Ellis each attempt to unveil a diagnosis—rather comically—for why a divorced woman likes having casual sex; and the tumultuous spoiler, which didn’t leave this audience aghast, that Gloria—much like her male counterparts, for various convoluted reasons—likes to have  sex.

Zigzagging between therapy, personal narrative, soliloquy and song, Moxley sows a commentary of women’s oppression and self-denial in Ireland over the decades, the road to recognition, culminating in a rally for solidarity, suffrage, sexual liberation and self-agency.

The play feels like a relic, even in a year where vintage art is chic; and its message felt fumbled on a contemporary crowd, and drew quiet contentions among the generations in its audience. In a time when the feminists have been wide awake and acutely actualized, the thought of being pepped into empowerment by Moxley’s monologues, as if it never happened before, feels like a detraction from progress already made, or worse—an acknowledgment of setback.

What was perhaps intended to bridge commonalities in women’s issues from an Irish theatre to an American appears only to elicit disparities between the cultures, which didn’t quite translate for New York theatergoers. At some moments, a schism in generations of audience members was apparent, between those who adored the production and those who, when provoked by the cast to join in the spirit of the movement, did not, out of an anxiety of being deliberately patronizing.

The shock and rebellion aspect of the narrative, docile for most, left a hollow energy in a number of scenes, as audience members waited for a certain notch the play didn’t kick up to. The show’s pervasive flaunting of prosthetic penises by Moxley, albeit amusing, hadn’t quite turned heads as it may have hoped, towards offense or subversion, in a culture where “The Vagina Monologues” has been mainstream theatre for decades, and Gloria’s call to redefine names of the female anatomy felt eerily imitative of similar plays of its ilk. The feigning female orgasms onstage, received either with abject acceptance or awkward tittering—awkward for the production—didn’t rouse a Brooklyn audience far accustomed to viewing experiences more, for lack of words, extreme.

Many of the production’s climaxes thereby felt anti-climatic, as the play’s broad thematic conclusions the audience had come to long before its characters do.

Regardless of the hang-ups, the performances are a breakthrough. Gina Moxley, in a disemboweling performance of genders, is uproarious, unapologetic, irreverent, and endearing as she embodies and divests patriarchy, demands equality, and dares to hope.

In the role of Gloria, Liv O’Donoghue is divine, peculiar, and contained in an annoyingly-perfect performativity of a 1960s American woman, with every repressed gesture burgeoning on a proto-feminism restricted to her time.

Playing the show’s Greek chorus, and literal chorus, bassist Jane Deasy is both essential and inexplicable, whose presence brings the show a humorous element of understatement, and whose voice is a hypnotic, guiding light.

While the play’s point may be misinterpreted, with Ireland’s dialogue on women’s sexuality a considerably late-bloomer on the world’s stage, this production is not, however, without its embedded controversy.  In the scene between Gloria and Fritz Perls, Gloria startlingly remarks that she wants to put herself in the corner of the room “like a child,” so that men can pull her out of it, inferring the bleak critique that feminism perpetuates its own victimhood, only to double-back afterward and suggest such thoughts are the plot of devious, overpowering men.

To complicate things further, there is no complete representation of masculinity in this play: only vile, manipulative facsimiles of men as portrayed by Moxley, or as phalluses, literal objects of sex and symbols of assault. To depict only the worst parts of men, or none at all, is unconstructive for an American theatre in 2022, and it expresses a lack of understanding and openness towards a gender already notoriously difficult to be understood.

When Gina Moxley bookends this production by asking us “Do you see me?” we are left to ask ourselves what she meant. How is Moxley asked to be seen: as a female, an artist, or the voice of a kind of feminism that newer generations have both superseded and continue to stumble over?

To glamorize the past without revision is immature. To define one’s identity in opposition to an enemy is a vicious cycle. If the future of theatre seeks to avail us from ‘othering,’ narratives of such productions may consider keeping up with the times.