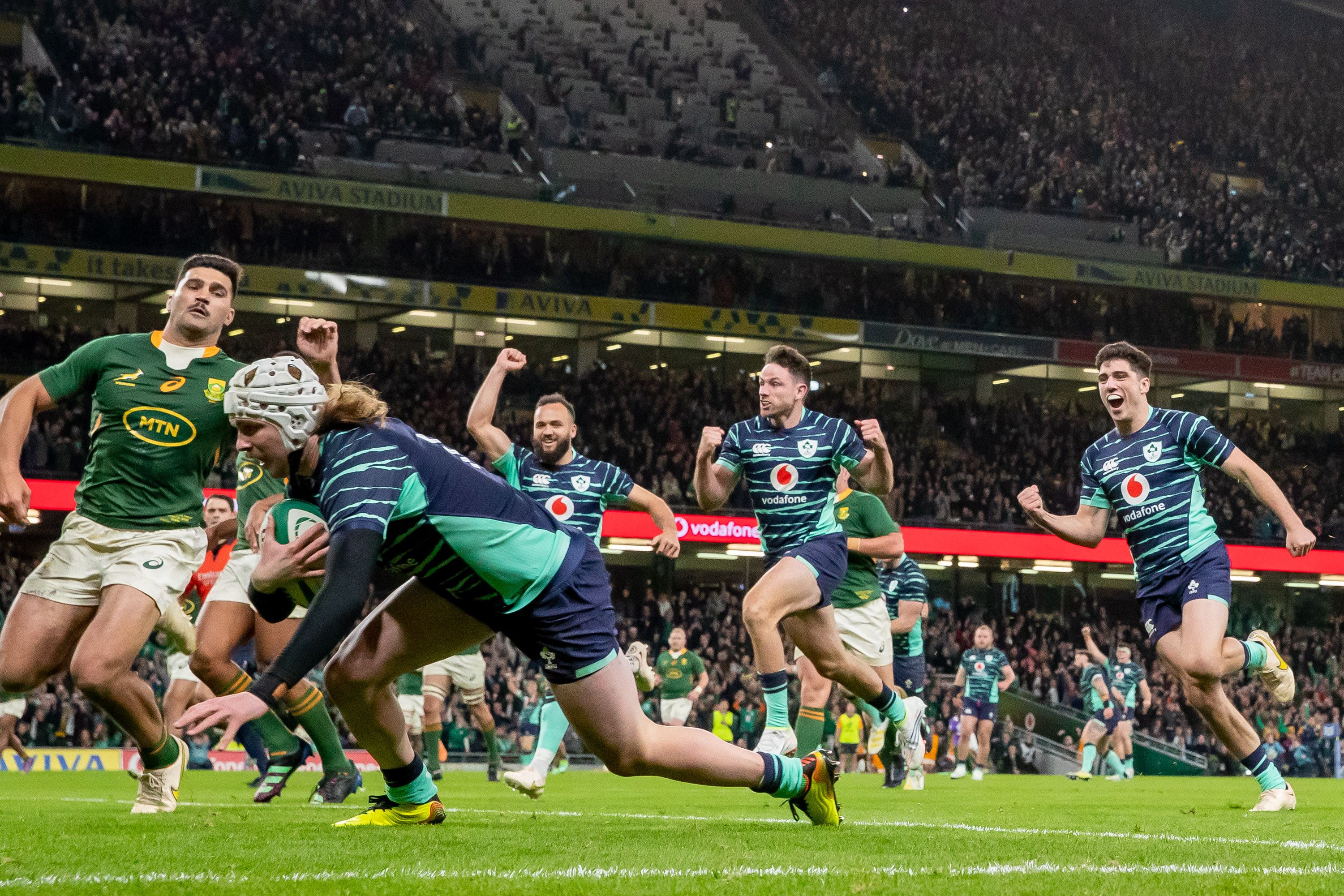 We’ve been here before – in 2018 to be precise against the All Blacks – only to flatter to deceive.

This time around though it feels different. Back then, the Joe Schmidt version of Ireland played by numbers and when they beat New Zealand 16-9 to become No 1 in the World ranking, they felt all they had to do was hang on for the following year’s World Cup and they would do “the devil and all.”

They didn’t and even lost to Japan in a group game as we underwhelmed our way to the exit door much earlier than we anticipated.

Andy Farrell’s squad is a different kettle of fish in that it is a team which plays primarily high-tempo rugby, but as part of an evolving learning curve. This means that instead of trying to put the green plan away in cold storage for something 10 months up the road, this group will seek to learn and advance as they follow up the November internationals with the Six Nations early in the New Year.

Farrell was particularly happy with the way his charges managed the occasion against the reigning World Champions as they had to defend for their lives as the Springboks came at them late in the game seeking to salvage victory from the jaws of defeat.

They looked awesome in the first quarter of the game, then Ireland fought back to wrestle some control before the bravery of Johnny Sexton turned the game with this decision making on the pitch that led to the first try of the game.

Up to then it had been a dour brawn versus brawn as the visitors sought to blitz Ireland with their sheer strength. They found hosts who were up for the challenge and who had no intention of bowing the knee and giving away kickable shots at goal.

So it was still all to play for when the sides turned over for the second half at 6-6 with little or no try chances opening up.

However, once Sexton threw caution to the wind by declining an early second half shot at goal in preference to going into the corner, the tide changed. Peter O’Mahony rose majestically to win the line out and then despite frantic attempts by the Springboks pack to wheel their opponents into touch,  Josh van der Flier  somehow managed in the mad frenzy to stay focused and touch down within the maelstrom for the first try of the day.

Sexton was awry with the conversion but would surely have sacrificed that for the second try which came three minutes later in a move that was all about the new Ireland keeping the ball alive at all cost. Caelan Doris somehow prevented the pill for going into touch and his feeding led to a slick three-quarter move which saw Mack Hansen released to speed over at the opposite corner for a score which will certainly stand the test of time.

Sexton failed again with the  add-on kick and at 16-6, you felt that the 10 points would be vulnerable if Rassie Eramsus' side  could get a touchdown of their own. As it happened, they got over for two through Franco Mostert and Kurt-Lee Arendse and it took a nerveless Sexton penalty to see Ireland home by that three points in the end.

Afterwards Ireland’s Head Coach Farrell said his side had to work hard to come out on top. “The game was a bit of everything. What a Test match, a proper old-fashioned Test match. It’s been something we have been craving to come up against for quite some time.

“We stood up tall, and so did they. They are a hell of a team, but to come out the right side of a victory is super pleasing for us,” he claimed.

"How we managed the occasion was the most pleasing thing. The confidence that we get on the back of that, through blunting their weapon of theirs, is a massive credit to the players and coaching staff, and the scrum was outstanding today. The backs complemented them at the same time,” he added.

On a day of highs for Ireland,  the durable Conor Murray lined out for his 100th cap although while playing well, he had to leave the field injured during the first half. Indeed such was the force of collisions that two other Irish starts – Stuart McCloskey and Tadhg Furlong – also had to be replaced.

McCloskey had been playing out of his skin but his departure allowed  Jimmy O’Brien to come on and play a major part in the home win.

So too did Jamison Gibson-Park, whose introduction in place of Murray immediately saw Ireland up the pace of the game. That asked questions of South Africa and when he made the break for the second try, they had no answer to his incision into the line.

When Furlong was forced off, it seemed ominous for the Irish scrum but replacement Finlay Bealham surprised all by producing a tour de force in the Irish front row.

While South Africa were winning individual collisions, Ireland’s forwards – as a unit – were immense, particularly with how they shut down the Springbok maul.

Sexton’s two first half penalties came in the first minute though Willemse tied things up in the 9th minute when Furlong strayed offside. Ireland then had 10 minutes with an extra man when Kolbe saw yellow for a spear tackle which could easily have been red.

If anything, the Springboks were the better side in this period and could have gone ahead had Willemse not kicked an easy penalty wide of the mark. Dan Sheehan almost got in for a try after 31 minutes but  a TMO checked found a knock-on in the move.

Sexton made it 6-3 but it was a perilous lead as both Murray and De Jager had to go off injured. Shortly before the break Kolbe kicked the equaliser though it appeared that South Africa’s ferocious tackling would wear down the home challenge as time went by.

A huge challenge on Sexton saw him stay on the deck for over a minute and it looked like our on-field general would have to depart. However, the outhalf is made of sterner stuff and he shrugged off the big hit to put Ireland on the front foot for the rest of the game.

By pointing to the corner, he changed the landscape as the ensuing try gave Ireland a fillip that was followed up by the best bout of play of the day when Hansen crossed for the second try.

Doris popped the ball to the ubiquitous Van der Flier who immediately fed the fleet-footed Gibson-Park who was angling into the heart of the visitors’ defence. Slicking, top-quality handling by Tadhg Beirne,  Hugo Keenan and O’Brien meant Hansen only had to run 10 metres without a hand on him to touch down.

If that was Ireland’s attack at its best, from there to the end, it was our defensive excellence which time and again held up the Springboks when they appeared to be ready to bludgeon their way over. An example was when Kwagga Smith’s quick-tap penalty saw the Africans deep in the Irish 22, but the home defence stayed strong with O’Brien paying his way with a massive one-on-one tackle on the towering Etzebeth.

On 65 minutes Mostert’s long reach  got him just across the white chalk making it to the line, after Kolbe and Kriel had been denied in the far corner but Kolbe’s easy conversion came back off the post, leaving Ireland precariously ahead 16-11.

Sexton’s penalty seven minutes from time was vital as it gave his team an eight point lead putting Ireland two scores in front.

You just knew it wasn’t over yet though as the World Champions’ scrum took control, allowing Arendse in for a try which again wasn’t converted.

So while Ireland made a major statement ahead of next year's Rugby World Cup rematch, the truth is we will have to continue to improve because Handre Pollard should be fit by then and he will kick those goals that they missed. It means our game will need to improve by another 10 points if we are to be competitive on neutral territory in France in the next World Cup.

The beauty about the Farrell era is that the team has taken on the challenge he has thrown down to them to keep on getting better. It is a joy-ride for Ireland’s fans so long used to boot, bite and bollox rugby as other nations, notably The All Blacks and the Springboks look at our game as ask: “How do we live with this new Ireland?”