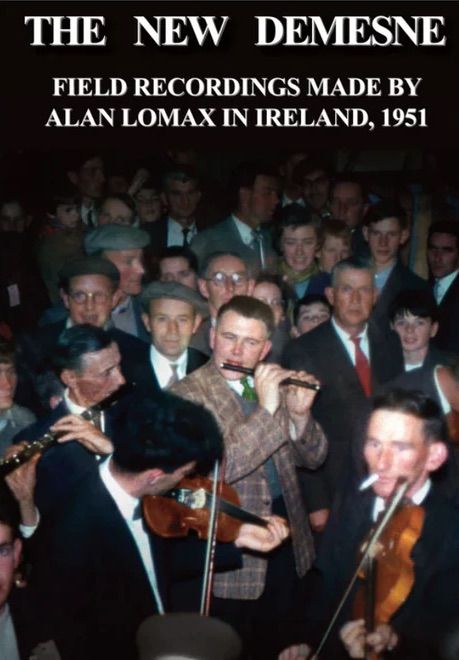 Ennis was Lomax's entrée in Ireland

A little while back, I received a parcel from the Irish Traditional Music Archive that contained, among other things, a handsomely presented two CD set called “The New Demesne: Field Recordings made by Alan Lomax in Ireland, 1951.”  An impressive package, it includes two CDs holding 66 tracks, and comes with a lavish 68-page booklet that provides an account of Lomax’s trip and notes for each track.  It is a substantial, well-organized and beautifully recorded release that includes a lot of outstanding music and stories that shed incredible light on what rural Ireland “sounded” like in the early 1950s.  It’s an album that anyone interested in Irish music and folklore will absolutely want to have in their collection.

In January 1951, Lomax went to Ireland with folk singer Robin Roberts to make field recordings that would later see commercial release as part of the “The Columbia World Library of Folk and Primitive Music” series.  Lomax made similar trips for this series to places in other parts of the world including Indonesia, India, Japan, Spain and Africa, and in each place he generally partnered with a local collector who assisted in making connections to the finest performers.  In Ireland, his guide was the legendary Seamus Ennis, who at the time was working as a collector for Radio Éireann.

Lomax made the most of these connections.  A legendary figure in folklore and musicology, he was a gifted field recordist known for having a fairly aggressive approach that generally yielded great performances from his subjects and his time spent in Ireland did nothing to alter this reputation.  Superb recordings of Ennis, Aggie Whyte, the Ballinakill Céilí Band and Neillidh Boyle stand out in particular.  The range of sean-nós tracks, all of which reflect a very high standard, is quite nice to hear as well.  Bess Cronin sounds wonderful here.  All the material here is very “natural” and the excellent sound quality may surprise some listeners, given it was all recorded over 70 years ago.

“The New Demesne” is an important set.  The recordings are marvelous to listen to on their own, which makes it easy to forget that they are also of great historical importance.  Not only do the tracks here significantly expand upon the original 1955 release (they nearly double it), they document a tradition that was in a very lively state and a moment in Irish time that is no longer accessible.  The work that the Irish Traditional Music Archive has put in only enhances the original content.  (Kudos to the rogue’s gallery of production professionals who worked on this, including Harry Bradshaw, Jackie Small, Nicholas Carolan, and Terry Moylan.)

This is top-shelf stuff and highly recommended to anyone interested in “the pure stuff.”  Definitely check it out.  “The New Demesne” is available through the Irish Traditional Music Archive’s web shop, visit itma.ie to learn more.

In other news, a new (well, sorta) Irish music camp begins this weekend.  The “Augusta Irish Retreat 2022,” which runs Nov 3-6, will take place in Blackwater Falls State Park, Davis West Virginia.  Put on by the Augusta Heritage Center, the organization that ran the legendary “Augusta Irish Week” for 35 years, the weekend will feature Brenda Castles, Liz Hanley, Pat Broaders, Jonathan Srour, and Eamon O’Leary, five brilliant musicians in what is a new and refreshing approach.

“Something new,” you ask?  Indeed!  In a post to Facebook, Castles described it as a “teaching weekend with a difference,” in that its focus will be on applied music & performance.  “Instead of instrument focused workshops,” she wrote, “we'll be looking at subjects like how to create a harmony on a song, how to compile a setlist, how to accompany songs with melody instruments, playing for dancers, dancing the tune, ornamentation in Irish music (a subject close to my heart) and so much more.”  It’s an excellent way of doing things that will benefit participants greatly.

Folks will be interested to know that the Augusta Irish Retreat was put together in association with Mick Moloney over a year ago and Moloney had a lot to do with how the week looks.  Moloney spoke with me about it quite a bit before he died, and one of the things he stressed was that it’s taking place in a new facility, with comforts that are a far cry from those to which Augusta Irish Week alumnae became accustomed.  Best wishes to everyone involved!  To learn more, visit augustaartsandculture.org.

Finally, condolences the family and friends of Maryann McTeague Keifer, a stalwart of Irish music in Chicago who sadly passed away last week.  The long time host of the “Ireland Tonight” on WDCB, Keifer also wrote for the “Irish American News” and “Irish Music Magazine” and was a great supporter of traditional Irish music and its artists in general.  A great loss, for sure.