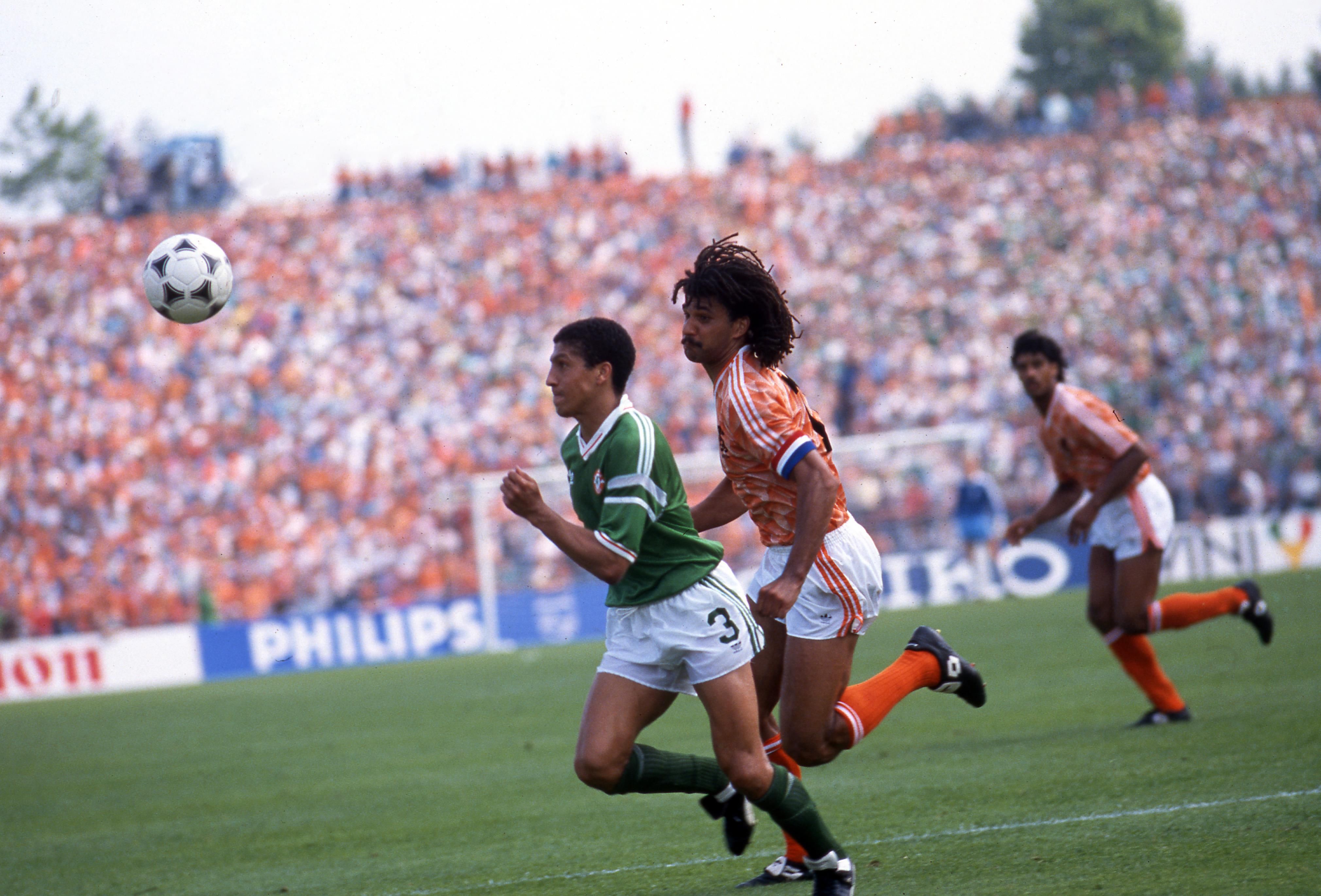 Ireland's Chris Hughton and Ruud Gullit of the Netherlands competing for possession in the 1988 European Championships held in Germany. INPHO/BILLY STICKLAND

As a player, Chris Hughton’s only World Cup experience was watching from the Irish bench at Italia ’90, where he ceded his left fullback position to young Steve Staunton, as the Republic reached the quarterfinals.

Thirty-two years later, the first Black player capped by Ireland – 53 times between 1979 and 1991 -- is back at football’s biggest stage as technical advisor to his father’s homeland, Ghana.  And the Black Stars have a good chance of advancing to the World Cup’s Round of 16.

Victorious over South Korea on Monday, a draw against Uruguay in Ghana’s final group H game this Friday [10 a.m. EST on FS1] will –- barring a monumental upset in the Portugal vs South Korea game – earn the African side a spot in the knockout round.

Born to an Irish mother, Hughton was in Ghana early this year when local media linked him to the national team job. In the end, he was offered a role as advisor to the German-born and bred Nana Otto Addo, a former international who played for Ghana in the 2006 World Cup including the 2-1 victory over the United States.  Addo is also a coach at Borussia Dortmund.

The offer was too good to refuse for Hughton, whose father Willie Hughton had emigrated to in Britain in the 1950s, and became a London postman and married Christine Bourke. The opportunity to connect with his paternal homeland, irresistible.

“‘I do feel a strong connection to the country,” the former Premier League and Championship manager with multiple clubs Hughton told the Mail. “So, when they asked if I was prepared to help, using my experience and knowledge, the answer was always going to be yes.”

A third member of the Black Stars coaching team is George Boateng, the former Middlesbrough and Holland midfielder.

Going into the World Cup, where Ghana were drawn with Cristiano Ronaldo’s Portugal, Uruguay, and South Korea, Hughton told the Mail:  “We are where we are, the lowest-seeded team in a group of four — and it’s a tough group.

“In my conversations with people, I encourage them not to get too carried away, but this is the World Cup. They [the federation] will be expecting us to do well. So will the country. It’s a cup competition and we have to be confident.”

Probably heeding Hughton’s words, the Black Stars battled with Ronaldo & Co. in their opener last week, succumbing 3-2, and nearly clinching a last gasp equalizer. They then proceeded to hold off the Koreans en route to a 3-2 win on Monday.

It goes to the wire on Friday with Hughton hoping Ghana can hold off Uruguay in the long-awaited rematch of their 2010 World Cup quarterfinal in South Africa that went to penalties. In that game, Luis Suárez blocked a late Stephen Appiah shot with his hand on the goal line and the Ghanaians missed the missed a penalty that would have made it 2-1. Suárez is back for Uruguay, as are Edinson Cavani, who transferred from Manchester United to Valencia this year, and Rodrigo Bentancur, who plays for Tottenham, where Hughton spent most of his professional career, playing 297 league games in the top flight.

Hughton was bullish going into the tournament. “One thing I’m confident of is the work Otto and the technical staff have put in. This team will be very well prepared and the players will give everything,” he told the Mail.

“We will have to play well and we’ll need a bit of luck. But we’ve seen in past tournaments that anything is possible for a country like ours.”