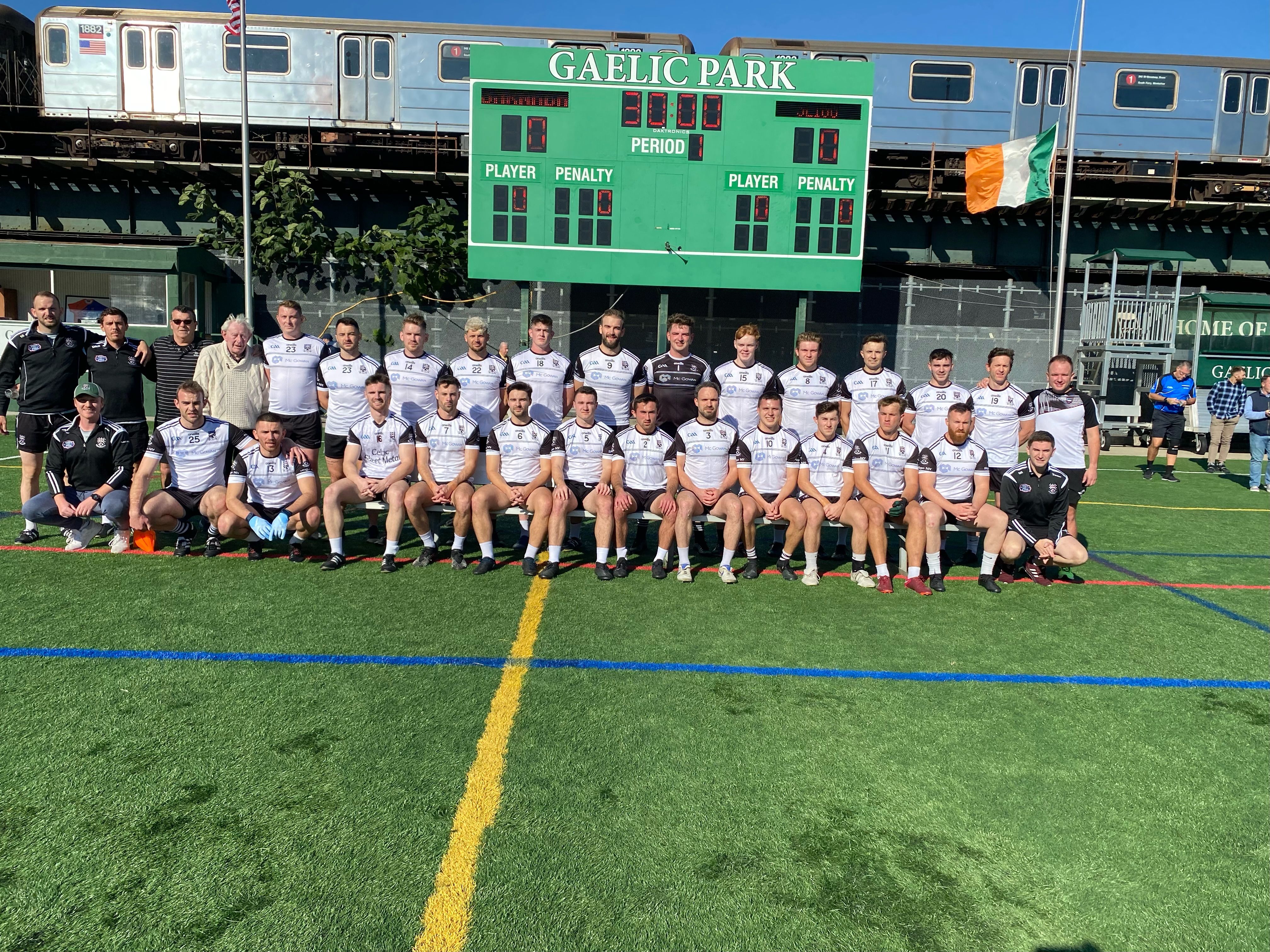 There’s usually plenty at stake in a final and that certainly was the case in this New York senior football final between these close rivals. St Barnabas were going for their third consecutive title, and of course this was Sligo’s third attempt, as they lost the previous two finals to St. Barnabas.

The game lived up to its billing, and there was plenty of excitement at the end, as there was just the minimum between the sides.  Overall Sligo deserved the title as they were more consistent and creative over the hour. Their defense was resolute, capably marshalled by Jamie Davis, and Brian Coughlan was a powerful force in the middle. Upfront they had a diversity of scoring options, which were well orchestrated by Tadgh O’Riordan on the forty.  On the other hand Barnabas rarely played to their full potential, or perhaps they weren’t allowed. They were nearly always playing catchup and overly reliant on frees for their scores.

Playing conditions were ideal and it was great to see many of the old faithful return to Gaelic Park. Meanwhile Sligo were the first to score as Connell Aherne pointed a close-in free after a Barnabas defender seemed to be harshly penalized. Sligo kept the pressure on as Barnabas’s defense appeared to be in disarray, but their attempts yielded nothing. Then after five minutes Barnabas forced a turnover which set in motion a sequence of passes that ended with Tiernan Mathers setting up Jack Reilly for a goal.

Despite the goal, Sligo maintained the momentum as a nice defense-splitting movement involving corner men Ahearne and Davis ended with midfielder Coughlan splitting the posts. Three minutes later another raid ended with Aherne blasting the ball to the net. Barnabas struggled to get into striking positions, or make headway up front as Sligo managed to get plenty of players back to thwart their incipient attacks.

Midway in the period Sligo extended the lead to a goal as Eric Monahan pointed a free from an acute angle. Shortly after Barnabas got their first point as a foul on Conor Rafferty resulted in Jack Reilly sending over from about 40 yds. Then it was tit for tat in this low scoring encounter until a late hit on Peter Cronin ended with a pointed close in free by Jack Reilly. Sligo did have a let off as a rather speculative shot rebounded off the butt of the upright, but it was cleared to safety. Big Johnny Glynn entered the game and he had an immediate impact. Tadgh O’Riordan won possession in the middle of the field, and then he rode several tackles before off-loading for Glynn to score.

For the last five minutes of the half Barnabas seemed to find their rhythm. Timmy Fitzmaurice entered the game, and he had an instant impact. He delivered a ball inside to Eoghan O’Donnell, and the wing forward was fouled, leaving place-kicker Reilly the task of pointing it. Then a strong run down the wing by Shane Brosnan set the scene for Fitzmaurice to score and tie the game. Barnabas managed to go ahead just before the interval as a late hit on Conor Rafferty created another scoring opportunity for Reilly. The Bronx Boys led by 1-5 to 1-4 at the break despite struggling for much of the first period.

Sligo were quickly out of the blocks on the changeover. Jamie Davis snapped up the throw-in and quickly released it to Tadgh O’Riordan, who had it over the bar within twenty seconds Three minutes later Sligo were back in front as Johnny Glynn delivered a well- directed ball into the path of goal-bound Eric Monahan for him to punch the ball to the net as keeper Cole advanced. The full forward ended up crashing into the post, and had to be replaced. Barnabas were staying in touch courtesy of their best and most productive player, Jack Reilly, as he landed a fine point to capitalize on good support play form Mikey Brosnan and Eoghan O’Donnell. The deficit was back to a point as Reilly sent over another free from an acute angle. Jim Davis then pointed to complete a nice movement involving Danny Corridan and corner man Aherne.

On the ten minute mark center forward showed a great vignette of skill and strength as he waltzed past several tackles to score an inspirational point.  Once again there was a goal between the sides, but Barnabas’s chances took another hit as they lost a central defender to a red card. Still they battled away and midway they had two attempts rebound off the posts before Reilly put it over the bar. However over the next seven minutes Sligo would put four unanswered points on the board and go two goals clear. They looked to be cruising to victory. Powerful runs by Brian Coughlan kept Sligo’s attackers well supplied. First Aherne pointed a free and that was followed by a Coughlan score. A surging run down the right wing by Colin Keane was illegally impeded. Up stepped keeper Cadden and coolly slotted the ball over the bar from 55yds mark. The busy and speedy substitute Mike Creegan also fired over a point as Sligo led by six points, 2-11 to 1-8, with seven minutes left.

Then just as in the first half Barnabas finished strongly, but still came up short. Their long scoring drought ended as Tiernan Mathers blasted over after a strong run by substitute Brendan Martin. Mathers was causing Sligo plenty of anxiety as his next effort hit the post. A foul and a quick free got Barnabas a point before another Mathers, Conor, reduced the deficit further. Sligo were now struggling to get the ball out of defense as it was quickly returned and well fielded by Tiernan Mathers, who set up Mikey Brosnan for another point.

Now there were two between the sides as time ticked away. Referee Pat Donoghue, who gave a very commendable performance, was forced to add some time as Sligo were dilatory in putting the ball into play. Barnabas were awarded a free, Tiernan Mathers let fly with a rasper of a shot, but it was deflected over the bar. Then on the kick-out, the buzzer sounded and Sligo were New York champions for 2022. You could say it was a case of third time lucky, but there was nothing really lucky, they fully deserved the honors as they were the better team for the better part of the hour. In addition more of their players stepped up to the plate when needed.

St. Barnabas went down fighting like champions, and their successes over the years is testament to wonderful development work being done by the Minor Board.  This is also the 50th anniversary of the club, and though they lost this one, they still have plenty to celebrate from their very impressive history. The Boyle, Mathers, Brosnan and Hogan brothers along with Conor Rafferty, Timmy Fitzmaurice, Eoghan O’Donnell and their chief marksman, Jack Reilly gave it their best shot. There were rightly scenes of great jubilation at the end of the game and as captain Paul Kelly hoisted the cup. It was Sligo’s first New York senior championship title since 1985, and that was won in the board room, principally due to the ineligibility of one Pat Spillane playing for Donegal, their opponents on that occasion.

Anyway I’m sure my resident press -box analyst and good friend, John Marren, a great Sligo supporter and official through the years will probably treat himself to a few extra cigars, and this victory was also a nice 80th birthday for the Sligo man. Prior to the game there was a minute’s silence for the late Mick Hogan, grandfather to players Conor and Shane, and also for Martha Glynn, Johnny’s grandmother. There were also 10 candles burning in memory of the 10 people who lost their lives in the horrific explosion in Creeslough, County Donegal at the weekend.