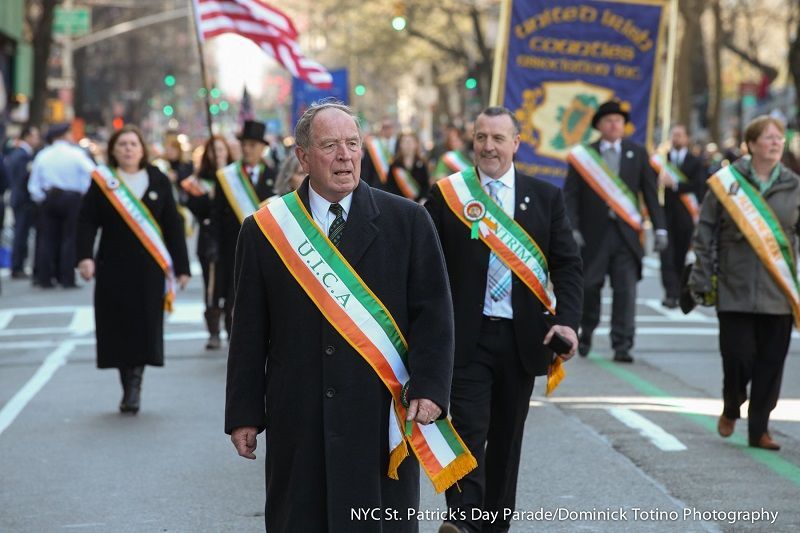 John Dunleavy, who for years ran the New York St. Patrick’s Day Parade with a strong hand and what some admired as an unbending resolve in the face of inevitable change, has died at the age of 83.

Mr. Dunleavy passed in the early hours of Wednesday morning with family by his side.

A Westmeath native with a classic immigrant’s resume, Dunleavy presided over Irish America’s grandstand event through a period of tumult and change, most evidently the years of rancor and argument over the inclusion of a gay marching group carrying its own banner.

He was unable to hold back that tide of change and was ultimately ousted from the parade chairmanship.

The parade, with Dunleavy at the helm, was buffeted by argument and debate and an unintended role as a stage for a broader debate on gay rights, one that witnessed extraordinary scenes on Fifth Avenue during most of the parades of the 1990s.

The matter of LGBTQ marchers carrying their own banner was all but resolved when, in the summer of 2015, the parade experienced one of its not infrequent internal upheavals. Part of the fallout would see parade vice chairman, Dr. John Lahey, emerge as board chairman and Mr. Dunleavy ultimately taking his leave, most reluctantly, of the parade organizing hierarchy.

In the years that followed there would be court writs, ill feeling, and allegations that St. Patrick himself was being extracted from the parade, its physical manifestation, indeed its very ethos.

Some of the funds that came under examination involved trips to Washington, D.C. in which Mr. Dunleavy worked to strengthen links between the parade and the U.S. military.

Mr. Dunleavy, a U.S. Army veteran himself, expressed pride in those enhanced links even as he fiercely resisted an overt relationship with the LGBTQ community.

And links of all kinds were broken and mended during Dunleavy’s quarter century as head of the parade.

At one point in the late 1990s the Echo, which annually published the parade line-of- march, lost access to it after publishing an editorial supporting the inclusion of the Irish Lesbian and Gay Organization in the parade.

Though formal relations between the Echo and parade committee were sundered for a couple of years, Mr. Dunleavy always remained available for discussion and, of course, some degree of argument.

That argument was invariably polite.

The issue of gay marchers under their own banners aside, Mr. Dunleavy’s tenure as chairman raised the profile of the parade, not least as a result of the selection of prominent individuals as grand marshals.

One parade that would be a standout during Dunleavy’s chairmanship was the 2002 march. At the stroke of midday the entire parade stopped. Marchers turned to face south to where the World Trade towers had stood just six months previously.

Many who were present would say afterwards that you could hear a pin drop. That heart stirring parade was led by Grand Marshal Cardinal Edward Egan.

Mr. Dunleavy was active in the Ancient Order of Hibernians for most of his American life. By the mid-1980s he had risen to the position of President of the New York County Board.

He is survived by his wife Maureen, from County Cavan, and daughters Patricia and Catherine. Funeral arrangements have yet to be announced.