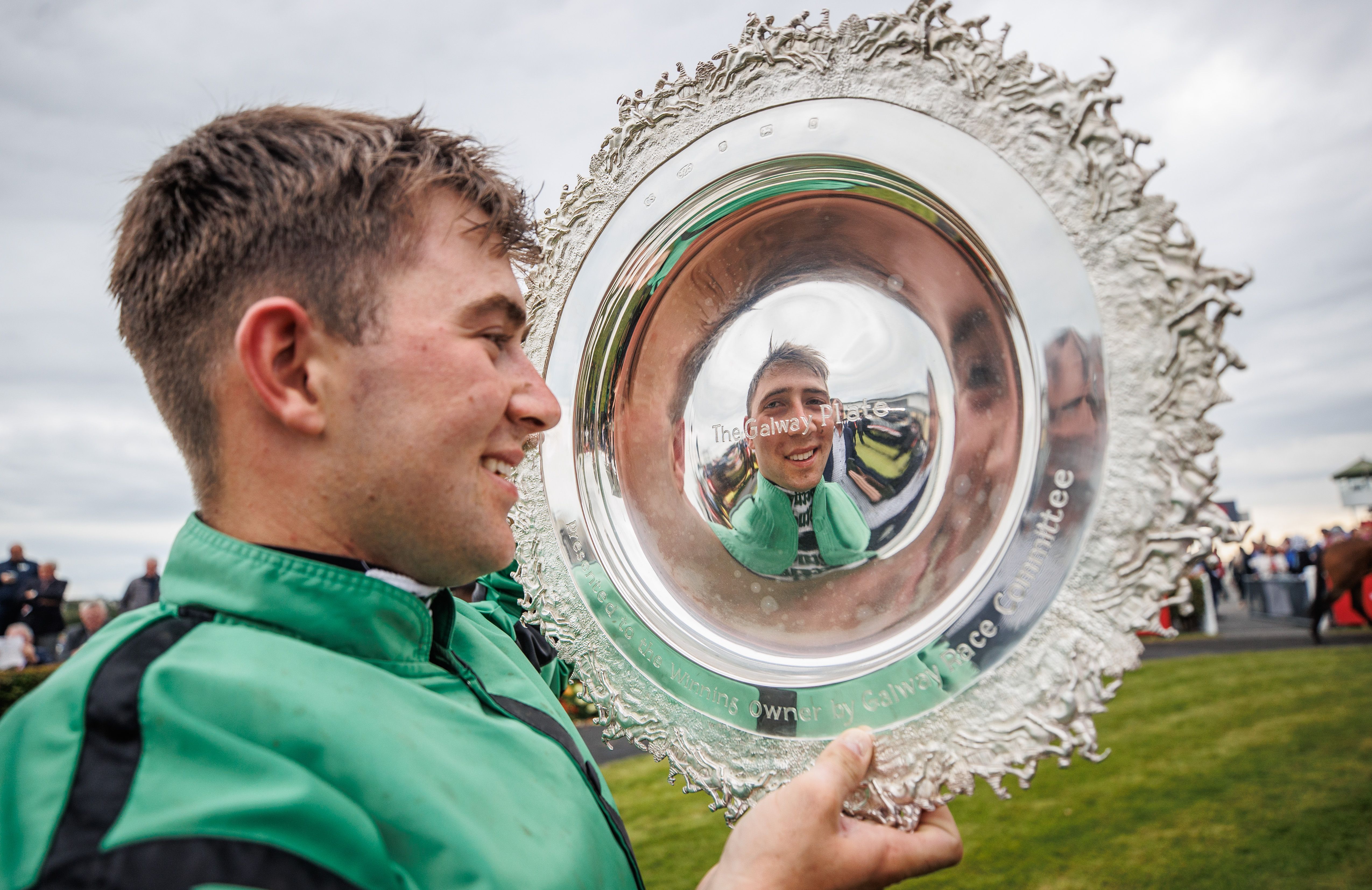 Jordan Gainford celebrates with the Galway Plate after winning with Hewick on July 27 at the Galway Race Festival. The jockey and horse, trained by John Joseph "Shark" Hanlon, will race in the Grand National in Far Hills, N.J. tomorrow. [inpho/James Crombie]

The New Jersey hamlet of Far Hills is situated some 50 miles from the Jersey shore but the bucolic municipality in Somerset County is on the alert for a shark attack on Saturday. The perpetrator in question is no other than John Joseph “Shark” Hanlon, who has entered Hewick in the Grand National, the feature of the seven-race card in the 101st edition of the Far Hills races.

The program, which will be set amidst a dramatic backdrop of fall foliage, has attracted a healthy contingent of horses, trainers and jockeys jetting across the Atlantic to make their mark on the highlight of the season among the steeplechase set.

Hewick, a 7-year-old gelding owned by T.J. McDonald and bred in Ireland by William Quinn, is the fairytale story this year. Purchased for only €800, he was nurtured slowly at Hanlon’s yard in County Carlow. After 10 failures, Hewick finally broke his maiden two years ago at Kilbeggan. Since then, he has won six of 16 attempts, including the Galway Plate at the Galway races in July. Jockey Jordan Gainford is coming over for the ride, despite losing his seat on Hewick at the final fence in their most recent outing, three weeks ago at Listowel.

Hewick is the 3-1 second choice on the morning line in the Grand National. Among his eight rivals are the four top finishers in last month’s Lonesome Glory Handicap at Aqueduct. The winner that day, Noah and the Ark, is one of five other Irish-breds who will line up for the start.

The one to watch, however, will be Snap Decision, the Lonesome Glory second finisher which grinded through 20 furlongs while lugging 168 pounds. He conceded 28 pounds that day to Noah and the Ark, whereas they will (as will all the runners) carry equal weight of 156 pounds. Snap Decision was a close second to The Mean Queen in last year’s Grand National.

The other Irish-breds in the Grand National are Pistol Whipped, Global Citizen, Ask Paddington and Belfast Banter. Danny Mullins will try again on Ask Paddington after riding that one to a third-place finish in the Lonesome Glory, while Jamie Bargary will hope to show some of the lads from back home that he controls this turf on the back of Belfast Banter. The latter has some improving to do off a seventh-place finish in the Lonesome Glory. Irish trainer Cyril Murphy has twice won this race, in 2015 and 2016.

Preceding the Grand National will be the John Forbes Memorial to be run at two miles over flat ground. This hundred grander has attracted 14 horses of varying accomplishment, including Augustin Stable’s Royne. Trainer Michael Dickinson has reached out to Fergal Lynch to ride the 4-year-old gelding, which should appreciate the distance. This will be the Derry jockey’s Far Hills debut.

Trainer Gordon Elliott returns wielding a triple threat, although he won’t have an interest in the Grand National, which he won in 2018 with Jury Duty. He will, however, depart from his County Meath yard with The Insider, slated to run in the Gladstone Hurdle, Ted Hastings in the Foxbrook Champion Hurdle and Soviet Pimpernel in the Appleton Hurdle. Davy Russell is named aboard all three Elliott runners.

Sean Flanagan rounds out the contingent of jockeys arriving from Ireland for Saturday’s races. He’s named to ride Booby Trap in the Foxbrook Champion Hurdle, Redicean in the Appleton Hurdle and Stolen Shoes in the nightcap, a maiden special weight over hurdles. Leslie Young trains all three.

Along with Bargary, jockeys native to Ireland but based in America who will be on horseback include Bernie Dalton, Barry Foley, Gerard Galligan, Ross Geraghty and Sean McDermott. Nearly half – 24 – of the 58 horses entered in the seven races were bred in Ireland.

Howyabud, Barry Foley up, on the inside, shown here nipping Decisive Triumph, Jamie Bargary up, at Saratoga in August. Howyabud will attempt to outrun that foe and four others in the Foxbrook Champion Hurdle at the Far Hills races on Saturday. [Photo by Susie Raisher]

Information on attending the races, including directions, are available on the Internet at farhillsrace.org. Fox Sports 2 will provide television coverage on America’s Day at the Races. The first race from Far Hills has a 12:50 post time, with the Grand National expected to go off at 4:05 pm eastern time.