Home Opinion KIRWAN: Joyously In The Thick Of It 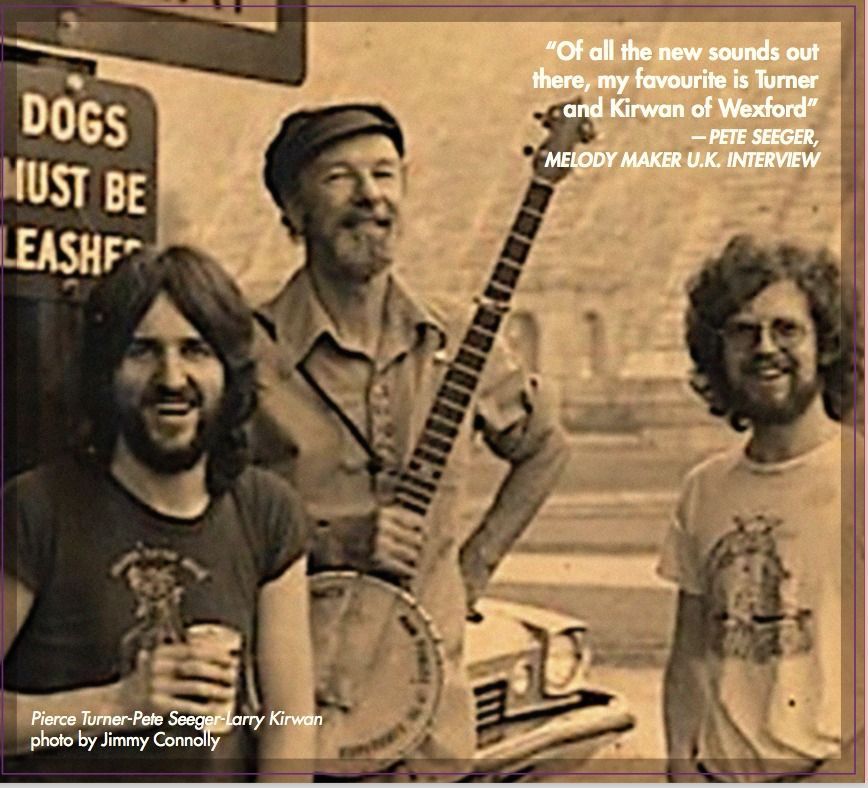 KIRWAN: Joyously In The Thick Of It

It’s not often you open your mailbox and find a picture of you taken 45 years ago, especially when it’s the cover of an album you’d recorded back in 1977 with your best friend.

It was like receiving a time capsule full to the brim with our attitudes, opinions, musical tastes, and so much more.

The album was "Absolutely and Completely" by Turner & Kirwan of Wexford.

It was the culmination of years of playing in dives, clubs, pubs, colleges, and even stadiums across the country.

To our surprise – and everyone else’s – "Absolutely and Completely" almost became a hit.

Back then radio wasn’t as strictly formatted as today. At many stations DJs could actually play what they liked; hence, a number of tracks from the LP became firm favorites on FM Radio.

Even in that bygone age of diversity, Turner & Kirwan of Wexford was an unusual band – just two of us with our soundman, Neil Kempfer Stocker on Taurus bass pedals.

Pierce Turner doubled on clavinet and Moog synthesizer, all the while playing a high hat with his left foot.

I played a heavily effected acoustic/electric guitar and hammered the hell out of a bass drum with my right foot.

We once got banned from New York City’s spacious Town Hall for being too loud, which says as much about our attitude as our volume levels.

Oddly enough, we were also banned from CBGB - an unheard of feat - though we were the first band to play the joint.

It was either feast or famine for T & K of W. Within a month of disembarking at JFK, a Radio City talent scout heard us at the nearby Pig and Whistle, and signed us for a weekly wage that made our eyes pop.

Alas, we never got to sit in with The Rockettes for we were unable to produce the requisite green cards.

Still, New York was our oyster - a paradise where you could rent an apartment in the East Village for 100 bucks a month.

Sure, it was a tad dangerous but who cared. There was so much happening musically, and we savored it all. Punk, Reggae, Folk, and Jazz blasted from club doorways, plus on summer evenings in Central Park you could thrill to Pavarotti and Bernstein.

Up in The Bronx, Durty Nelly’s, The Wagon Wheel, and The Village Pub hosted gigs deven nights a week, while a couple of miles down the Concourse Grandmaster Flash was creating beats and anthems that would change the world.

It was a great scene and we were in the thick of it, mixing punk and classical riffs to tell stories about lonely priests, and traveling people, always with echoes of Wexford trailing behind.

In the DIY ethic of the times we made our own album. It was rockin, psychedelic, orchestral folk, and very much us.

We thought we might pick up some random airplay, but lo and behold, WNEW, WLIR, and many other FM stations across the country added our songs.

The beat went on, the crowds got bigger, and our admirers ranged from Pete Seeger to David Bowie, Norman Mailer to Frank Herbert, Frank McCourt to Lester Bangs.

It didn’t hurt when "Girl Next Door" became the first rock song about lesbianism to get significant airplay, though when Polydor, our Irish record company, listened to the lyrics, they promptly dumped our LPs into the garbage. The Island of Saints and Scholars apparently wasn’t ready for us

In the meantime, our manager ordered us up to the Catskills to rehearse a five-piece band that could capture the sound we’d created in the studio, but when we returned he had moved to the West Coast, and a promised U.S. tour evaporated.

So we formed the new wave Major Thinkers, were signed to a major record deal and became the “next big thing” for a couple of months.

Eventually Pierce and I went our separate ways, and "Absolutely and Completely" became an LP collector’s item. But we never forgot it and its 1970s uniqueness.

It’s just been re-released as a limited edition CD with lots of bonus tracks and can be purchased at https://shop.bandwear.com/turnerandkirwan