Home News 'In Liz We Truss'...Oops 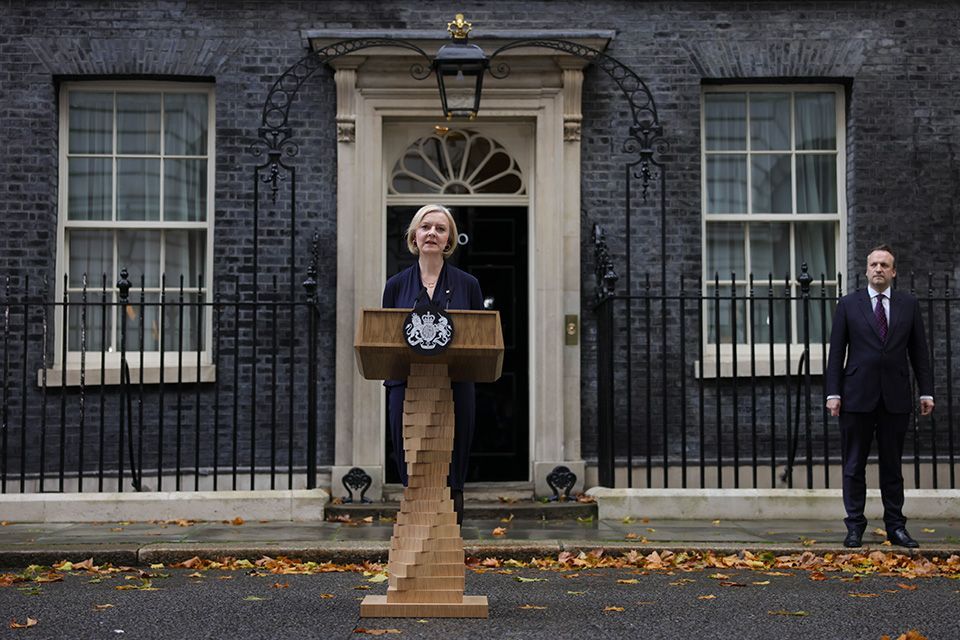 Liz Truss has announced her resignation as British Prime Minister, this after a chaotic 44 days in office.

The announcement is causing reverberations in both Belfast and Dublin.

Sinn Féin Vice President and First Minister Designate Michelle O’Neill, called on political parties in Northern Ireland to unite to “stand up to the Tories” following the resignation announcement delivered outside 10 downing Street.

“The chaos & disastrous policies of the Tories has heaped misery onto workers & families, O'Neill tweeted.

“Liz Truss joins the long line of British Prime Ministers who have failed people. We need all parties in the North to work together, stand up to the Tories & support people in a new Executive.”

Even as she was heading for the political exit, Truss stuck to her mantra of the UK being a low tax, high growth economy while taking advantage of the "freedoms of Brexit."

Taoiseach Micheál Martin offered his best wishes, but added that a resolution to the Northern Ireland Protocol dispute was now "ever more urgent."

Said Martin:  "I had a number of opportunities to engage with Prime Minister Liz Truss during her brief period as prime minister and I convey my best wishes to her and her family, following today's announcement of her resignation.

"Working together to protect the gains of the Good Friday Agreement and to support peace and stability in Northern Ireland continue to be vital responsibilities for the British and Irish governments, particularly now in the absence of a functioning Northern Ireland Executive and Assembly.

"Substantive EU-UK engagement to reach agreement on outstanding issues around implementation of the Protocol is ever more urgent.

"Britain is Ireland's closest neighbour and a relationship of partnership between the British and Irish governments is vital for peace and prosperity on these islands. I remain committed to working with the British government in this spirit."

Martin, arriving at a European summit, said that Britain must appoint a new prime minister as "quickly as possible" to ensure political and financial stability after Liz Truss's resignation, this according to an RTE report.

Alliance leader Naomi Long, according to a report in the Irish News, said that Truss’s term as prime minister "was a disaster from start to finish and will go down in history for all the wrong reasons."

Said Long: “It had degenerated into a disaster a day, sometimes an hour, for Liz Truss, driven by her decision to pursue a hard right agenda, including trickle down economics, which sent the economy into meltdown and compounded the pain of families and businesses already under strain as a result of the cost of living crisis.

“This relentless chaos has yet again underlined the urgency of restoration of a functioning and reformed Stormont Executive. In previous crises we have been able to fall back on Westminster intervention. However, we do not have that luxury given the unprecedented scale of the crisis unfolding in Westminster.

“While an Assembly and Executive cannot fix international or national crises, they can provide leadership for local people during this unprecedented time and help guide our public services and finances through this difficult period.

“Whatever the outcome in Westminster of this latest development, our priority and our duty to people here is to get back to work ahead of next week's deadline and deliver the best leadership we can for their sake.”

Northern Ireland has been facing a before October's end deadline for a new Assembly election as a result of the DUP's continued boycott of the Stormont Executive.