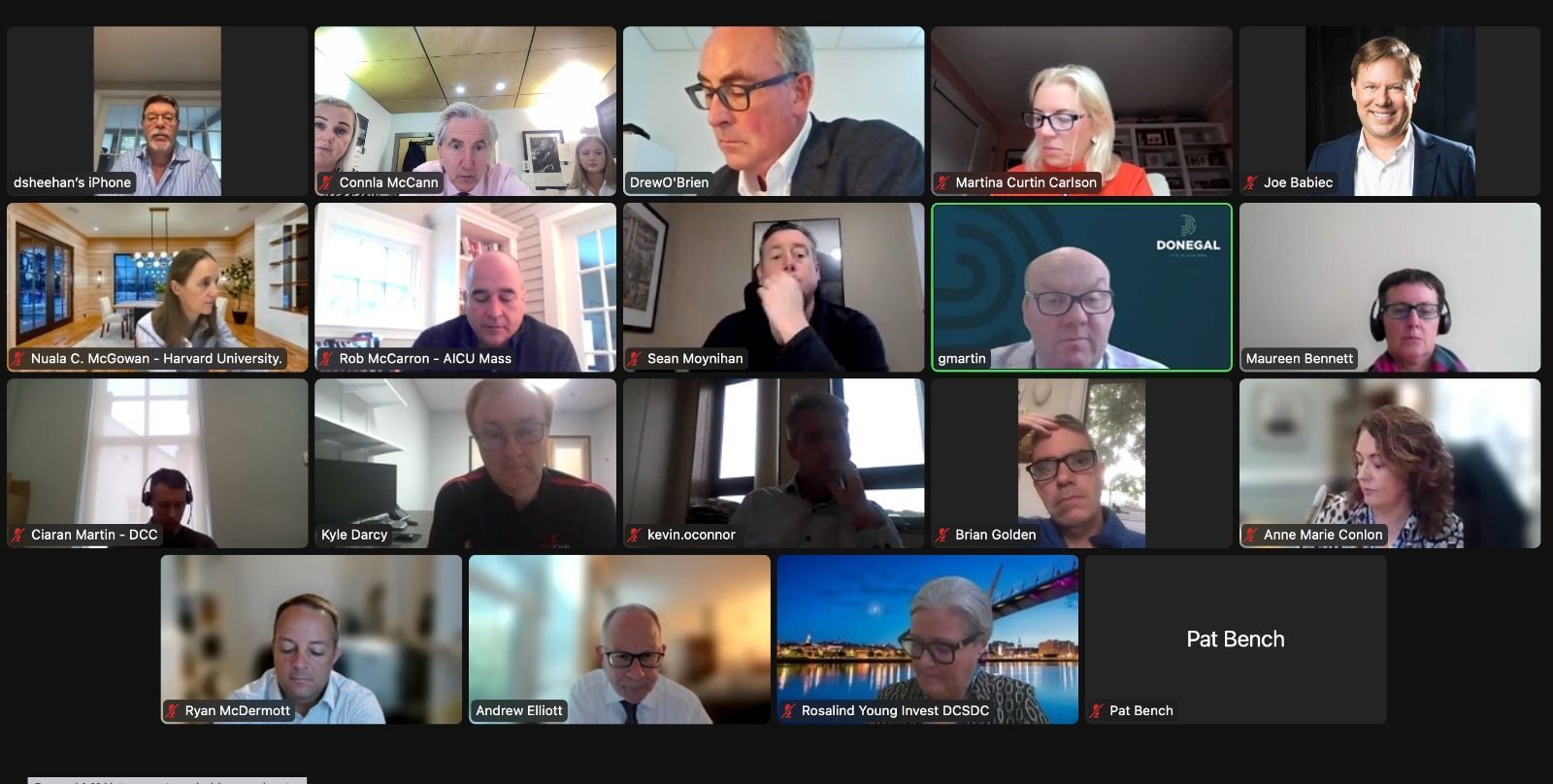 OFF THE MARK: Honorary Chairs of Golden Bridges Conference Luncheon 2022 met via Zoom to discuss the 18 November event

Preparations have begun for the first in-person Golden Bridges transatlantic conference in Boston since 2019. This morning, Honorary Chairs of the conference came together for their inaugural meeting to discuss how best to ensure visiting companies and institutions from Northwest Ireland get full value from their visit to Boston.

The transatlantic conference luncheon in the Seaport Hotel on Friday 18 November will bring together business leaders and civic champions from Northwest Ireland to forge partnerships with corporations, universities and Irish American organisations across Massachusetts.

First held in 2008 at the JFK Library, the Golden Bridges conference is supported by Invest Northern Ireland, Tourism Ireland, the Northern Ireland Bureau, Údarás na Gaeltachta, Ulster University as well as Donegal County Council and Derry City and Strabane District Council. In 2020 and 2021, the Covid pandemic forced the annual conference online but leaders in the Northwest say there is huge excitement ahead of the return to an in-person gathering.

The 2022 event will give a highpowered delegation from Northwest Ireland the opportunity to showcase transformative progress in the region, including the opening of the new Atlantic Technological University in Co Donegal and the opening of a new School of Medicine at the University of Ulster in Derry.

Fáilte is fiche. We're honoured to have District Attorney of Suffolk County, MA (which includes great city of Boston), open Golden Bridges 2021 virtual conference. This celebration of links between Massachusetts & Northwest Ireland goes out on Friday 19 Nov from 9am. @DARollins pic.twitter.com/j9lWfbY0zu

Honorary Chairs of the Golden Bridges 2022 Conference Luncheon read like a who’s-who of Boston Irish American leaders. Said Connla McCann of Aisling Events, organiser of the annual transatlantic mission: “We are delighted that so many of the individuals who are synonmous with the success of Irish America have come on board as Honorary Chairs and I have no doubt they will be of enormous help in ensuring our visitors from Northwest Ireland get the connections and introductions they need to fuel further transatlantic co-operation.”

The 2022 Honorary Chairs include:

You can see more about Golden Bridges 2022 online.