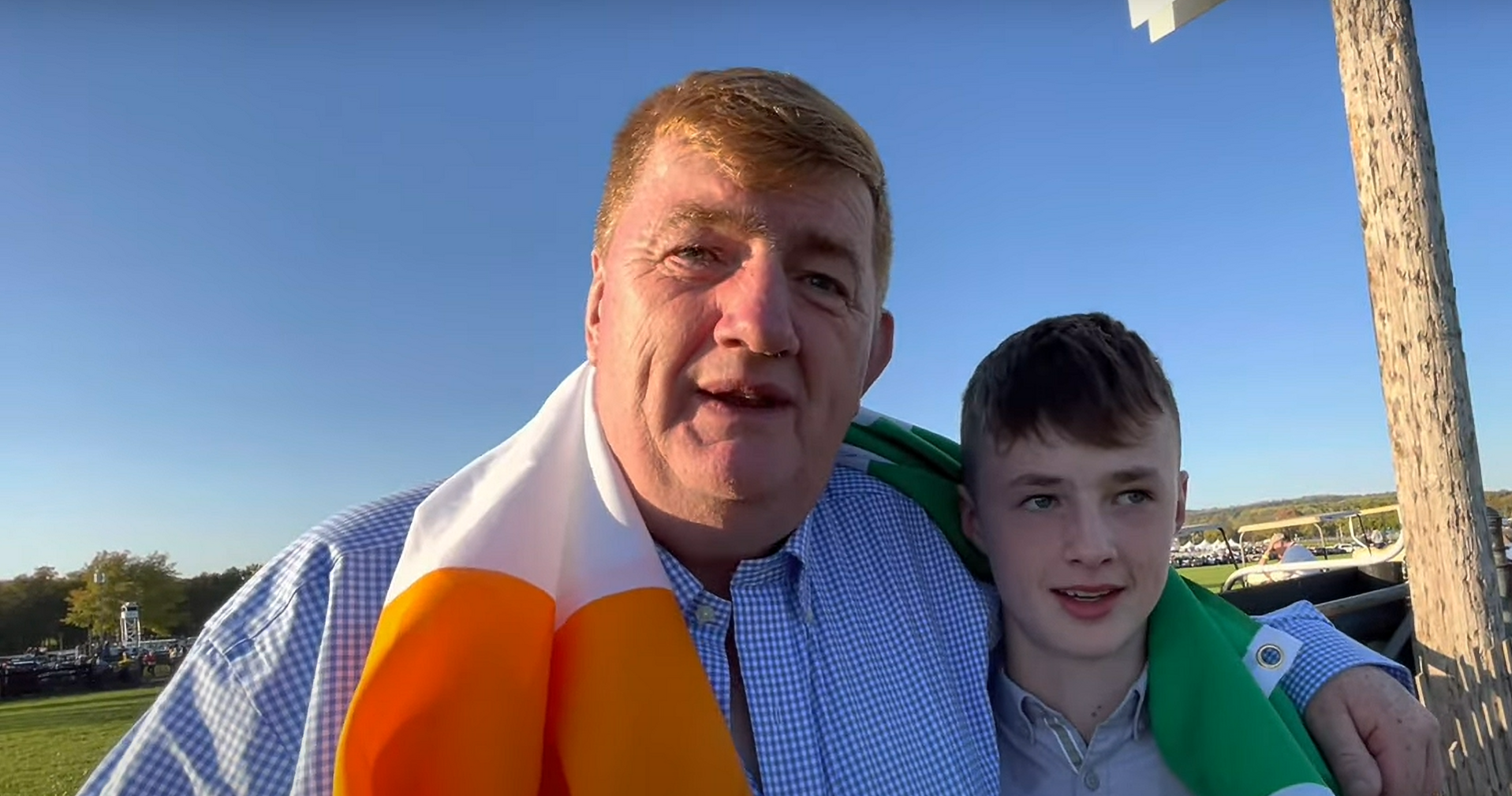 John Joseph “Shark” Hanlon and his son Paddy celebrate after Hewick’s win in the Grand National at Far Hills.

Carlow-based Hewick made the trip across the Atlantic worthwhile for his connections, dominating the best of America’s steeplechasers to win the Grand National at Far Hills in New Jersey on Saturday. The victory on a picture-perfect day continues a fairytale run for the bargain basement purchase, which earlier this year won the Galway Plate.

Regular jockey Jordan Gainford of Enniscorthy, Co. Wexford came over to ride Hewick for trainer John Joseph “Shark” Hanlon. Gainford kept the 7-year-old gelding within reach of the two pacesetters while maintaining an outside position so as not to get boxed in. Meanwhile, Snap Decision, the 13-10 favorite, raced on Hewick’s left flank.

As the field remained pretty much static through the first two miles, the question of when Gainford would send Hewick lingered. That answer arrived with three fences remaining to the finish.

Hewick took the lead as the frontrunners faltered, ensnaring Snap Decision in a scrum. Hewick surged ahead but had to deal with late-arriving Noah and the Ark, most recently seen winning the Lonesome Glory Handicap at Aqueduct. They kept company until clearing the final fence, after which Hewick lengthened stride and left no doubt as to which was the best horse on this afternoon. Hewick won by 11 lengths.

Jordan Gainford draped in the Irish flag following his win in New Jersey.

Hewick, owned by T.J. McDonald and bred in Ireland by William Quinn, paid $6.20 to win as the second choice. Noah and the Ark finished second, a link in the chain of Irish-breds that comprised the superfecta that returned $6,994.60 for $2. Ask Paddington and Belfast Banter rounded out the super in that order. The top three finishers were the only members of the field not to be treated with Lasix.

“Unreal,” Hanlon said of Hewick’s victory. “It’s something you dream and seldom see. What a ride he got. [Gainford] gave him a peach. He jumped brilliant. Words are scarce.”

When Hewick arrived at Far Hills, the ground was firm but showers a couple days before the race fixed that.

“The cut in the ground was a big help,” Hanlon said. “That was the main thing. I walked the track yesterday. The horse deserved it and the jockey deserved it because at Listowel we were probably robbed.” Hanlon was referring to Hewick’s previous race in which Gainford fell at the final fence.

“It’s unbelievable,” Gainford said of his initial American victory. “In fairness to [Hewick], in his last couple runs all he did was gallop. He was unlucky in Listowel, so it was great to come over here and do it. To bring me over to ride him, I appreciate that.”

Hanlon indicated that Cheltenham in March will be Hewick’s next target. Everything else being equal, a return to Far Hills can’t be counted out, either.

“The sport we have here is unreal,” Hanlon said.  “To come over here, to spend hours coming over and get the results we did. And Gordon [Elliott] was here as well. Four runners here between us and three winners; where else would you get it? The prize money was unreal, the grounds are beautiful. It’s amazing, the Irish people in America, they all came out to support the horse.”

Hewick’s victory was an exclamation point of sorts on a day on which the Irish raiding party made off with most of the spoils.

TWO OUT OF THREE’S NOT BAD

Gordon Elliott has become a regular presence at this stand and won with two of the three horses he brought with him from County Meath. The Insider and Davy Russell romped by 17 lengths in the Gladstone Hurdle. The Insider is owned by the triumvirate of Kenny and Laura Haughey and Kieran Byrne. He returned $4.00 to win.

Nearly an hour later, Russell had to work a lot harder to get Ted Hastings up in the Foxbrook Champion Hurdle over a dead game Howyabud, ridden by Barry Foley. The Elliott runner, owned by Aidan Ryan, prevailed by almost a length. He paid $6.00 to win.

Soviet Pimpernel, owned by Del Rio Racing, looked as if he might make it three straight for Elliott and Russell in the Appleton Hurdle Stakes but his rally went awry after the final fence. He finished third behind Redicean, justifying Sean Flanagan’s journey from Ireland. The Leslie Young trainee paid $16.40 to win.

AND MORE FROM CARLOW

Elliott had nothing for either the Grand National or the John Forbes Memorial but no matter. The latter race, a new addition to the program this year, attracted 14 starters. The race was run at two miles with no fences involved.

The wagering public overlooked Agitare, which recently left the County Carlow yard of his breeder, Jim Bolger. Bernie Dalton had the seat on Agitare, which is owned by a large partnership and now trained by Keri Brion, and pressed the pace set by Basso. The Forbes basically turned into a private affair between the two longshots. Agitare surged ahead in the final furlong, winning by almost five lengths. He paid $39.00 to win and keyed a $509.80 exacta with the 30-1 Basso.

The afternoon turned into a showcase of sorts for the Irish breeding industry as Irish-breds won six of the seven races. Ljay, bred in Ireland by Richard Cavanagh and owned by Belle Meade Jockey Club and The International Venture, won the first race, the Harry Harris Hurdle Stakes. The nightcap, a maiden special weight hurdle race, went to Sean Clancy’s Cool Jet, which was bred in Ireland by Dierdre McGrath.