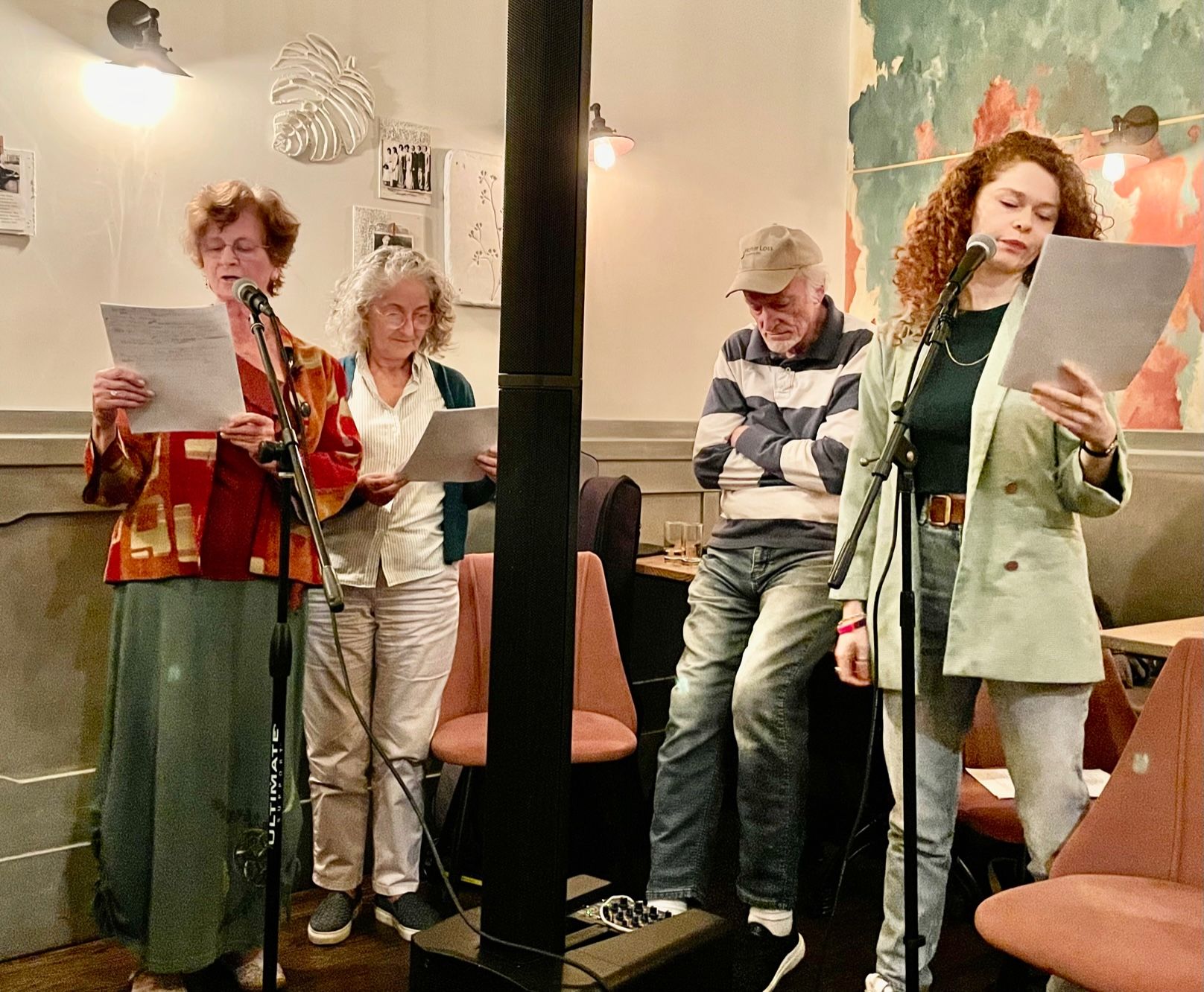 Maura Mulligan, left, and Meg Hennessy are at the mics, while Katherine O'Sullivan and Thom Molyneaux are behind them. [Photo by W. Jay Wanczyk]

The Irish American Writers and Artists returned to The Ellington restaurant on the Upper West Side for an in-person Salon on Sept. 27, with a mix of familiar faces and new performers, delivering a dynamic and soulful array of presentations to a full crowd.

Poet Robert McKenna started the evening with his energetic delivery of three pieces, ranging from funny to heartfelt to bitingly satirical. It was clear to everyone why he is co-host of the monthly Flash Mob Poetry group, as well as a member of Long Island Performance Poetry Association. His presentation proved to be a perfect start to the evening, and based on the crowd's response, he'll surely be welcomed back soon.

Maureen Brady's piece came from her new novel, “Tessa's Landing,” about the perils faced by a girl of 16 sent to America in 1846 from Achill Island. The story was inspired by family lore – her great-great-grandmother was sent from that island of Ireland's West Coast to New York to marry a man she didn’t know. Brady's vivid excerpt conveyed the terror and disappointment felt by the young woman in a strange new world.

Maureen published novels are "Getaway," "Ginger’s Fire," "Folly" (nominated by Adrienne Rich for ALA Gay Book Award and reissued as a classic by The Feminist Press) and "Give Me Your Good Ear," as well as a collection of short stories and three books of nonfiction. Her work has brought her many awards and grants, and she teaches creative writing at NYU and the Peripatetic Writing Workshop.

Next up, Meg Hennessy took the stage, and demonstrated her enormous talents both as a writer and a performer, with poems that wove complex rhymes and heartfelt imagery (particularly the slyly seductive "I Dare Ya"), delivered with style and confidence honed at the Nuyorican Poets Café and Restless open mic, among other poetry venues.

Meg is a poet and actor from Limerick in Ireland. She  moved to New York in 2016 to study acting and has since performed five shows with the Irish Repertory Theater and recently made her TV debut in Netflix series Archive 81. She has also had her work published in Insight magazine, and will surely have more publication credits to her name in no time.

Novelist and newcomer to IAW&A Anthony C. Murphy read from his novel, Shiftless, which recounts his growing up in Lancashire, England with his father Joe, who came from Bandon, Co. Cork. Murphy read an excerpt, both poignant and darkly hilarious, about an adult son in transit, bringing his father's ashes home to be buried in Ireland.

Rounding out the first act, and making their Salon debut, were the folk-rock duo the Kennedys. They played a song in honor of first responders who have risked and sacrificed so much during the pandemic, and also played "River of Fallen Stars," which was one of the first songs they wrote together. Their harmonies and their tight-but-jangly guitar sound had the room buzzing, and drew interest from both other guests in the restaurant and passersby out on Broadway.

After a brief intermission, the crowd was treated to a scene from Maura Mulligan's play Brigid.

Saint Brigid (played by Katherine O’Sullivan) comes back to earth on a mission to change the views of a conservative US bishop (played by Thom Moyneaux) who is attempting to stop Pope Francis from considering women for leadership positions in the church. Goddess Brigid (Meg Hennessy) accompanies her namesake on the mission and creates a fair bit of magical havoc in the bishop's office.

A native of County Mayo, Maura Mulligan is author of the memoir "Call of the Lark." She  teaches Irish language and céilí dance in New York. She is also hosting a Samhain Celebration on Oct. 31 at Playwright Tavern – email mauramulligan@aol.com for more information.

Bernadette Cullen, a long time member of IAW&A and presenter at the Salon, shared a few poems. As with her other work, these pieces were delicately crafted and conveyed a powerful emotional resonance.

James Rogers followed, reading a short story about an elderly professor going through airport customs, and getting thoroughly confused by the official jargon of the security agents.  James is originally from Leitrim, and his short fiction has appeared in the Galway Review and Inscape, to name but two. His debut novel is scheduled for publication next summer.

Kate McLeod's monologue from her full length play, "For The Love of Me," was read by Meg Hennessy (officially earning her the title of "MVP" for the night). Meg did the reading with no rehearsal, though her delivery made it seem that she had been performing it for years. The monologue is spoken by Emilia, a house maid at Olana, the Hudson Valley home of the painter Frederick Edwin Church. Emilia emigrates from Ireland, and her early days in New York City are not what she and her loving father imagined for her. Instead of a lovely dress and marriage to a barrister, Emilia finds sewage running in the streets and fat rats, and the realization that she has left behind everything she once knew.

To round out the evening, Malachy McCourt delivered his remarks with grace and wit. For the evening, he shared a new meditation about time, and ending with a heartfelt dedication to all the writers and artists with whom he has spent "thousands of yesterdays." Speaking of "Irish writers and songsters and poets," and specifically the IAW&A, he said "they have regaled us with poetry angry satirical soaring loving outrageous," and "you have read family based stories short and long you sang the song."

This would have been a fitting end to the evening, but as Malachy led the crowd in "Wild Mountain Thyme," a flaming array of sparklers and a candle-lit birthday cake arrived, to commemorate Malachy's 91st birthday which he had celebrated the week before.

Speaking of "writers and songsters and poets," the IAW&A is honoring Larry Kirwan, novelist, playwright, and founder of the band Black 47 on October 24 at 6:00pm. The annual "Eugene O'Neill Lifetime Achievement Award" is back – and in person – at the Skylight Room of Rosie O'Grady's. There will be live music, and performance of a scene and song from Larry's new musical in progress. Tickets are still available but going fast – visit here for information and tickets.