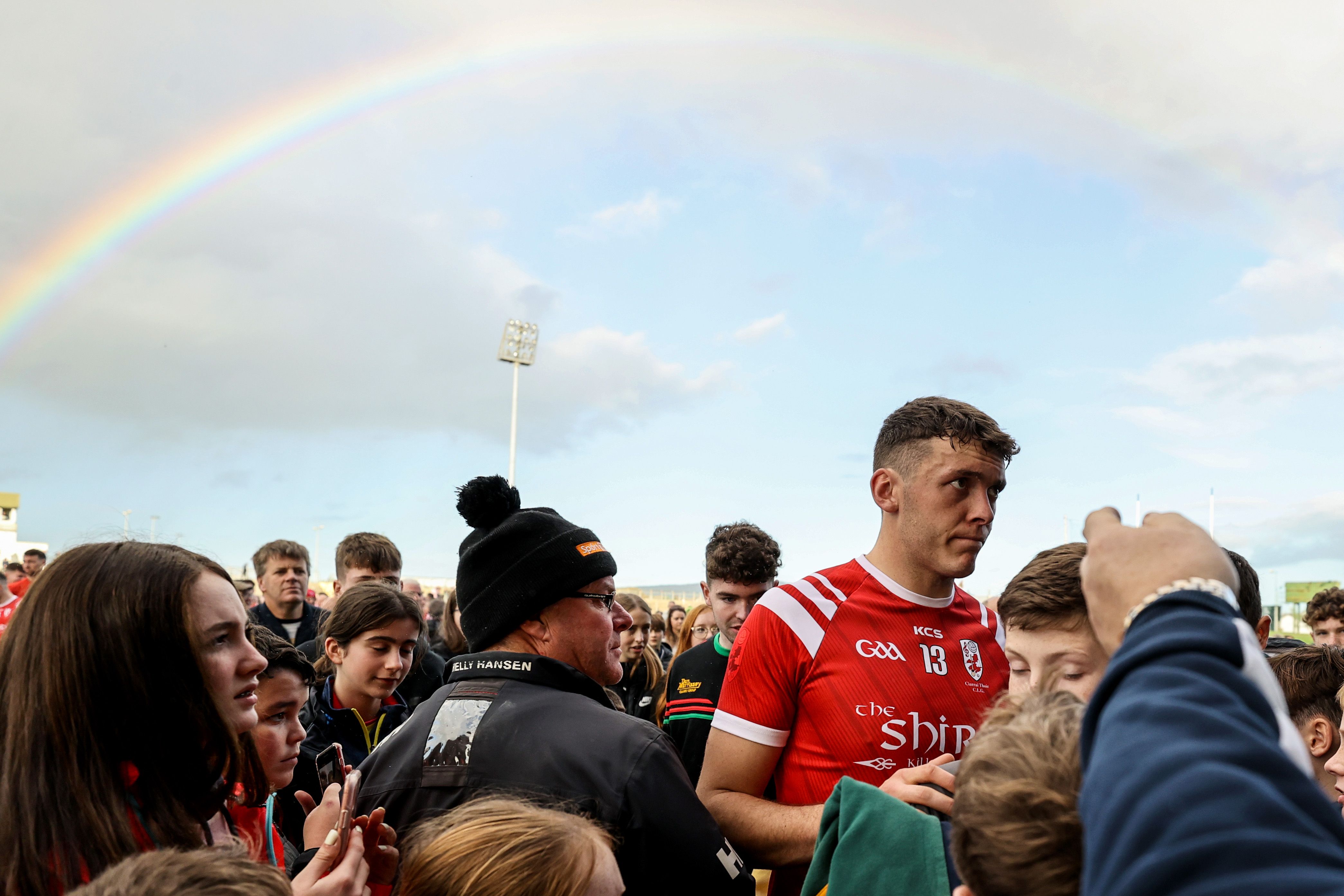 East Kerry's David Clifford signs autographs for fans after the game under the view of a rainbow at Austin Stack Park. Inpho/Ben Brady

David Clifford spent last year learning to accept defeat at every turn; this time round titles and awards are tumbling in his door like there’s no tomorrow.

It’s been a week of highs for the Kerry star who followed up on his Celtic Cross and Man of the Match award against Galway in the All-Ireland final this summer with another set of titles – the Kerry SFC crown on Sunday where he was again Man of the Match at Austin Stack Park in Tralee -- all this just days after becoming an All-Star again and being voted GAA Football Player Of The Year.

As he savored his third Kerry title in four years by accounting for 1-9 of his side’s total with a virtuoso performance, the country’s star player was philosophic about winning and losing.

“Look last year, we were beaten by Tyrone, we lost the county final, so it’s great to win both big titles on the intercounty and club scene this time around,” he said after collecting another team and individual award.

After winning the GAA’s main football award for an individual he pointed out: "It's very satisfying. I suppose the All-Ireland is the big prize you set out to win at the start of the year. But when you get nominated for something like the Footballer of the Year, it's nice to go on and win it. It's nice to get the recognition from your fellow players too, which adds an awful lot to it.”

The Fossa man was again unmarkable on Sunday as  Mid-Kerry knew from early on that there would only be one result – and Clifford’s goal midway through the second half killed the game off as a spectacle. A full forward line of James O’Donoghue and Dara Roche and Clifford the younger was way too mobile and classy for their opponents and with Paudie Clifford sending in clever ball, the inside line invariably won possession to either set up or take a score.

The goal was a scrambled affair but the build-up involving quick interchange of play was dazzling and was the highlight of another wise dull enough final.

Ruairi Murphy did his prospects of a call up to the Kerry panel no harm in front of the watching Kingdom boss Jack O’Connor with a display of perpetual motion and perceptive play.

He got the ball rolling by kicking the first score of the game in front of 6,000 fans – a lead they never relinquished for the rest of the hour.

Eniskillen wins battle of the Gaels

Reigning champions Erne Gaels were blown away by Enniskillen’s ability to get in for goals – and the two first half strikes killed the game off as a contest in this boring Fermanagh SFC final at Brewster Park on Sunday.

Dual star Conor McShea and Conor Love struck for the winners and with a 2-5 to 0-4 cushion at the interval, they were on their way to victory even at that stage to their first final win in 16 years.

It was Love who got the winner’s third goal as the outclassed Erne men all but threw in the towel, ending up losers by 10 points.

Multi decorated Manager John O’Mahony’s hope of victory for Satlthill/Knocknacarra came up short as fluid Moycullen won their second Galway SFC title in three years thanks to a late goal from Peter Cooke before 6,000 spectators at Pearse Stadium on Sunday.

O’Mahony must have felt the script was going according to play when his charges turned over 1-5 to 0-6 ahead with the prospect of a fresh wind in their backs for the second half. However it was their opponents who upped their game to put themselves in the frame and when their goal came, it was a sucker punch which Salthill hadn’t the time or the energy from which to recover.

Their half-back Daniel O'Flaherty’s goal had given them hope in the first half with his fortuitous goal but the one they conceded was the crucial score of the hour.

Just like coming out to improve their play in the second half,  Moycullen  also responded well to the early concession of  that goal by hitting four points in just over three minutes from Sean Kelly,  Dessie Conneely, Peter Cooke and Owen Gallagher finding the target.

Still they opened the door for their foes by scoring only once in the remaining 20 minutes of the moiety – a point from centre-back David Wynne.

It was nip and tuck in the second half with all to play for going down the home strait until Cooke with the goal from Gallagher’s high centre changed the complexion of the game.

their class on the double

It was a victory to end a barren 37-year spell in the Tipperary senior hurling championship but no sooner had they done it, than the team paid a warm tribute to Dillon Quirke, who died tragically after collapsing during their group game against his side, Clonoulty-Rossmore, 10 weeks ago.

Winning manager Liam O’Kelly held a red helmet aloft, in memory of Quirke’s helmet and in memory of his greatest day for Clonoulty in this final in 2017 as he paid tribute to the former player.

“There’s a bond between Kilruane and Clonoulty that’s absolutely phenomenal. I knew nobody in Clonoulty, bar Declan Ryan, being familiar with the name, but now I’ve lads ringing me, texting me, it’s unbelievable. With Andrew Fryday and these guys in a club like Clonoulty, they’re only going to get stronger,” he explained.

However for much of this game, it looked as if the  team would underwhelm on the big day. Losing 1-9 to 0-7 at the interval, the manager had to earn his salt by producing a number of telling switches, chiefly in defence, before sending his team out to overwhelm their opponents by 2-13 to 0-7 in terms of second-half scores. A reward for this victory is a Munster SH club encounter against  All-Ireland champions Ballygunner next Sunday.