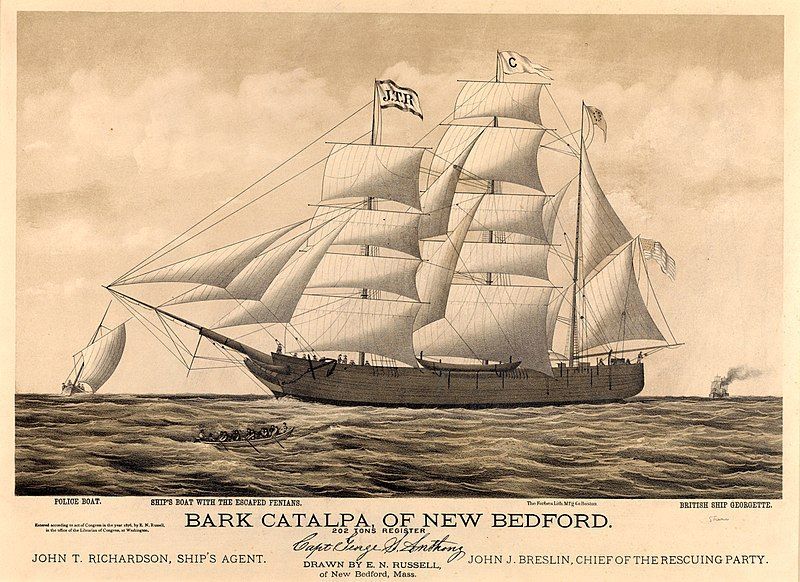 An engraving of the Catalpa

Like the voyage of the Catalpa itself, the campaign to fully and properly commemorate those rescued by the iconic ship has been a lengthy one.

But it is getting there.

On Saturday, October 15, in Calvary Cemetery, Woodside, Queens, two of the Catalpa Six, Thomas Hassett and Michael Harrington, will be remembered at an unveiling of new gravestones over the resting places of the vaunted Fenians.

The ceremony is set for noon.

The main speaker will be George McLaughlin of the Fenian Memorial Committee of America, while the oration will be delivered by Eva Natt O'Cathaoir, Board Member, National Graves Association of Ireland and author of "Soldiers of Liberty: A Study of Fenianism, 1858-1908."

Among the expected attendees will be James Ryan, great-grandson of Captain George Smith Anthony, skipper of the Catalpa.

The Fenian Memorial Committee of America is dedicated to remembering the Fenians and other Irish revolutionaries who are buried in the United States.

On November 16 of last year, in Pawtucket, Rhode Island, the committee honored James McNally Wilson on the 100th anniversary of his death at the grave marker the group had previously placed.

McNally Wilson was one of the six Fenian escapees on the Catalpa which sailed in 1876, with the help of Fenians in America, and plucked the imprisoned Fenians from the shores of Western Australia.

Stated a release: "The Fenian Memorial Committee has placed gravestones for three other Catalpa escapees, Michael Hogan (Chicago) and Robert Cranston and Thomas Darragh (Philadelphia). We also placed a commemorative stone at the gravesite of Father Patrick McCabe (Minnesota), who helped facilitate the Catalpa escape and spent the rest of his life in exile as a parish priest in America.

Fundraising by the FMCA has raised enough money to set that to right. In the future funds will be needed to maintain the graves.

Stated the FMCA: "We are pleased to announce that an anonymous donor has pledged a matching fund of $3,500 for this fundraising effort. Every dollar that you donate will be doubled!  This will help us significantly with the remaining costs ($10,000) for the two engraved gravestones and ancillary expenses. Without you, our work cannot continue. With your help, the brave Fenians and other Irish men and women like them will not be forgotten."

Following the Calvary unveiling there will be a social with music by Gary Gormley and Sean Moloney and sponsored by the Cork Association of New York at the Bantry Bay Public House. The day's activities are being organized by the FMCA with support from the Cork Association and the O’Donovan Rossa GAA, Astoria.

Those attending the unveiling ceremony are being asked to enter Calvary at the cemetery gate across from Bantry Bay Pub/Cork Club in Long Island City (33-01 Greenpoint Avenue, Long Island City and follow signs/markers to the gravesites. Both graves are located in Section 5 of Cemetery 1.

Added the FMCA release: "We are committed to resurrecting dormant or vanished memories of the Irish men and women who fought for Ireland, fled to the United States and died on American soil.

"They are part of a centuries-old tradition of resistance to English rule in Ireland, and Irish America is innately tied to them, their effort and their sacrifice. Remembering them, and indeed memorializing them, is our duty. This work helps us remember where we have come from and where Ireland is headed in its continuing journey towards reunification and independence.

"Thomas Hassett and Michael Harrington, both deserters from the English army, were part of an unsuccessful Fenian rising. They were considered 'military Fenians' and were sentenced to death. Thosefenianmca@gmail.com sentences were commuted to life in penal servitude in Fremantle, Western Australia. They spent 9 years at that prison colony, before being rescued by Irish-American Fenians and their helpers as part of the famous Catalpa escape. They settled in New York where they spent the rest of their years.

"Our committee discovered that their graves in Calvary Cemetery, Woodside, NY, have no grave markers. Their wives (and in the case of Harrington, his children who seem to have died in infancy) are also buried there.

"As part of our commitment to honor men who fought against English rule, suffered so much for their resistance and are buried in the United States of America - the land of their refuge - we will place tombstones at their graves."

Thomas Hassett was one of 280 convicts transported on the Hougoumont in October 1867. He arrived in Western Australia in January, 1868. He had been born in 1841 and died in December, 1893.

Michael Harrington was also transported on the Hougoumont. He had been born in 1825 and died in February, 1886.