Home Opinion ADAMS: My Heart Goes Out to Creeslough 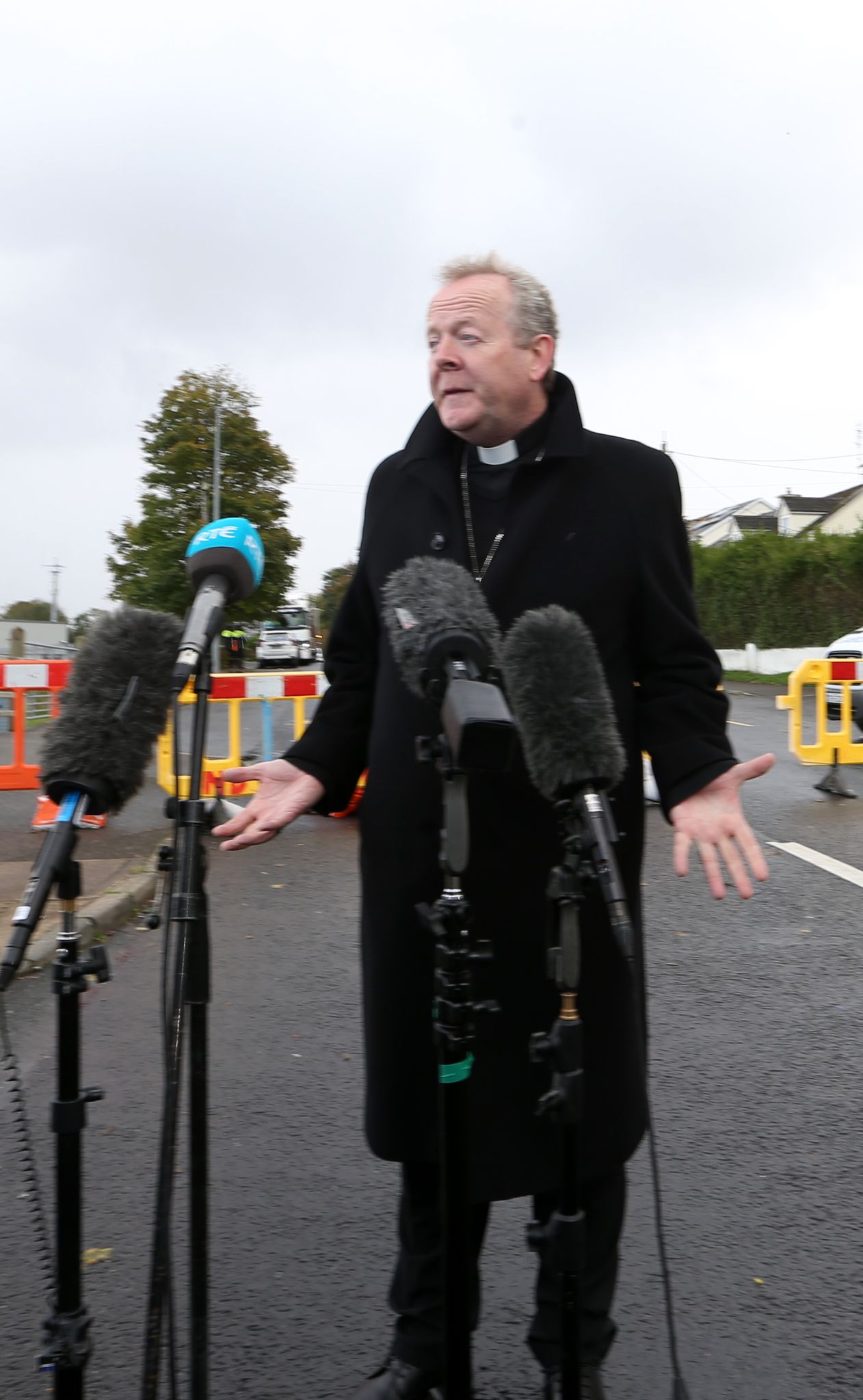 Archbishop of Armagh Eamon Martin speaking to the media after he observed the devastating scene at the Apple Green gas station and damaged apartments where Ten people died in the explosion tragedy in Creeslough. RollingNews.ie photo.

ADAMS: My Heart Goes Out to Creeslough

I know Creeslough well. I have friends who live there. Outside the village. At both ends. My heart goes out to the families of the ten people who were killed last Friday.

The brave, generous and determined efforts of neighbors and the emergency services to rescue victims has been exemplary.  It is difficult for anyone to come to terms with the random awfulness of this disaster, even from a distance. How much more harrowing and life changing is it for friends and family members? Our thoughts and prayers are with them all. Go deanfaidh Dia trocaire oraibh.

Last Saturday’s DUP party conference saw it behave as unionist parties have usually behaved. Within their own little bubble.

It’s the same old story. The DUP was established fifty years ago to oppose civil rights. It was openly sectarian. It pledged to Smash Sinn Féin - and failed - founded its own paramilitary organizations and set its face against power sharing.

It successfully outmaneuvered its unionist electoral rivals and emerged triumphant as the largest party in the Assembly. The largest northern party in Westminster. And an ally and confidant of British Prime Ministers. It was all going swimmingly.

Until Brexit. The DUPs support for the Brexit debacle; its willingness to act as a funnel for dark money to bolster the leave campaign in London, and its desire for a hard border on the island of Ireland, have all backfired stupendously.

Then there was the Renewable Heating Incentive scandal, with its evidence of gross incompetence and worse within the DUP. Its unwillingness to operate the power sharing institutions in a good faith way also led to serial crises.

None of this came as any great surprise to even a casual observer of unionist politics. From partition the northern state was to be theirs, to do as they chose. To treat non-unionists as they chose. And some DUPers believe that’s the way it should still be.

In 1998 as the Good Friday Agreement was endorsed by the people North and South and opposed by the DUP. I recall warning that there would be a battle a day getting the Agreement implemented. 25 years later and the DUP have effectively collapsed the Executive, the power sharing institutions and the north-south strand of the Agreement. Other key elements of the GFA remain unrealized, including the Bill of Rights. And the Agreement is under threat as never before from the most extreme right wing Tory government since Thatcher.

At the same time the DUP has set aside any concern for households facing a cost of living crisis made worse by that party’s adherence to the madness of Brexit. Families are struggling with increasing bills for oil, electric, gas, and food. As the cold weather arrives pensioners are facing a stark choice between heat and food.

In the midst of this crisis the Executive is unable to take decisions on supports which might mitigate for citizens because of the DUP. It continues to oppose investment in our health system, rejects marriage equality, resists women’s health rights, and the rights of Irish speakers.

Jeffrey Donaldson’s first speech as leader of the DUP last Saturday saw him reiterate all of this. He said: “Let me be clear – either the Prime Minister delivers the provisions of the Protocol Bill by legislation or by negotiation and ensures that our place in the United Kingdom is restored... or there will be no basis to re-enter Stormont.”

Of course, there has been an electoral cost for the DUP’s obduracy. As a result of its failure to read the electorate and the paucity of its leadership the DUP is no longer the largest party in the Assembly; nor do the Unionist parties represent the Assembly majority. Michelle O’Neill is First Minister elect. There are more nationalist MPs than unionist at Westminster. And in the recent census 51% of the population self-identified as Irish/Northern Irish. They chose not to identify as British. That figure has dropped to 40%.

Jeffery should be in the Executive and working with the other parties for the people who vote for the DUP and the rest of us. Instead it seems he is looking to an Assembly election to restore the DUPs fortunes and reassert unionist dominance. Mission Impossible my friend. We are all in this together. The days of unionist domination are over.

I am a long time fan of Patrick Kavanagh. And a long time supporter of Claddagh Records. Poet and writer Patrick Kavanagh was born in rural North Monaghan in 1904. He left school at the age of 12 and taught himself about literature. He went on to become one of our leading poets.

His early life was steeped in rural ways. He felt, rightly or not, that there was an intellectual barrenness to this existence. “Although the literal idea of the peasant is of a farm labouring person,” he said, “in fact a peasant is all that mass of mankind which lives below a certain level of consciousness. They live in the dark cave of the unconscious and they scream when they see the light.” Though his native area was poor, he felt that “the real poverty was lack of enlightenment,” and he added, “I am afraid this fog of unknowing affected me dreadfully.”

Nobel Laureate Séamus Heaney was influenced by Kavanagh.  He was introduced to Kavanagh's work by the writer Michael McLaverty when they taught together at St. Thomas's School on the Whiterock Road, in West Belfast. Heaney and Kavanagh both believed that the local could reflect the universal. Heaney said of Kavanagh: “His instruction and example helped us to see an essential difference between what he called the parochial and provincial mentalities". As Kavanagh put it: "All great civilizations are based on the parish". Kavanagh’s poems include; On Raglan Road, A Christmas Child. October. In Memory of My Mother. The Great Hunger. Bluebells are for Love. His novel Tarry Flynn is a gem.

Claddagh Records was founded in 1959 by Garech Browne and his friend Ivor Browne, to record and popularize our indigenous music. Claddagh famously brought us The Chieftains alongside other amazing musicians like Leo Rowstone and Tommy  Potts. I still have LPs from that era.

Claddagh also recorded Patrick Kavanagh and other poets, including Máire Mhac an tSaoi. Now Claddagh Records has launched Patrick Kavanagh-Almost Everything. It includes Kavanagh himself reading his own work and reflecting on his life. He is joined by a range of other readers including Bono, Liam Neeson, Christy Moore, Hozier, Kathleen Watkins, Michael D’, Jessie Buckley and Sharon Corr. Listening to Kavanagh himself is a special treat.

Garech Browne and others involved were visionaries. He planned for a revival of Claddagh Records and hoped before his death for the rerelease of some of its albums which were in storage at that time. He said “I would like the recordings to be available to anyone interested in Irish music, poetry and the written word. They are no good to anyone where they are now.”

I am delighted that Claddagh has been relaunched. I am looking forward to the publication of a history of Claddagh Records which Garech Browne was involved with.

James Morrissey, Chairperson of Claddagh Records, is centrally involved in these very positive and welcome initiatives. Claddagh have secured a licensing deal with Universal Music Ireland. In an interview with Siobhan Long in The Irish Times Morrissey says the aim is to make Claddagh’s catalogue available everywhere. This is great news. So is the release of Patrick Kavanagh’s Almost Everything. I have often thought that the best way to understand poetry is to read it aloud. Thanks to Claddagh we can now have one of our finest poets, Patrick Kavanagh, doing that for us. If you want to see what’s available check out the link at: https://claddaghrecords.com/collections/merchandise