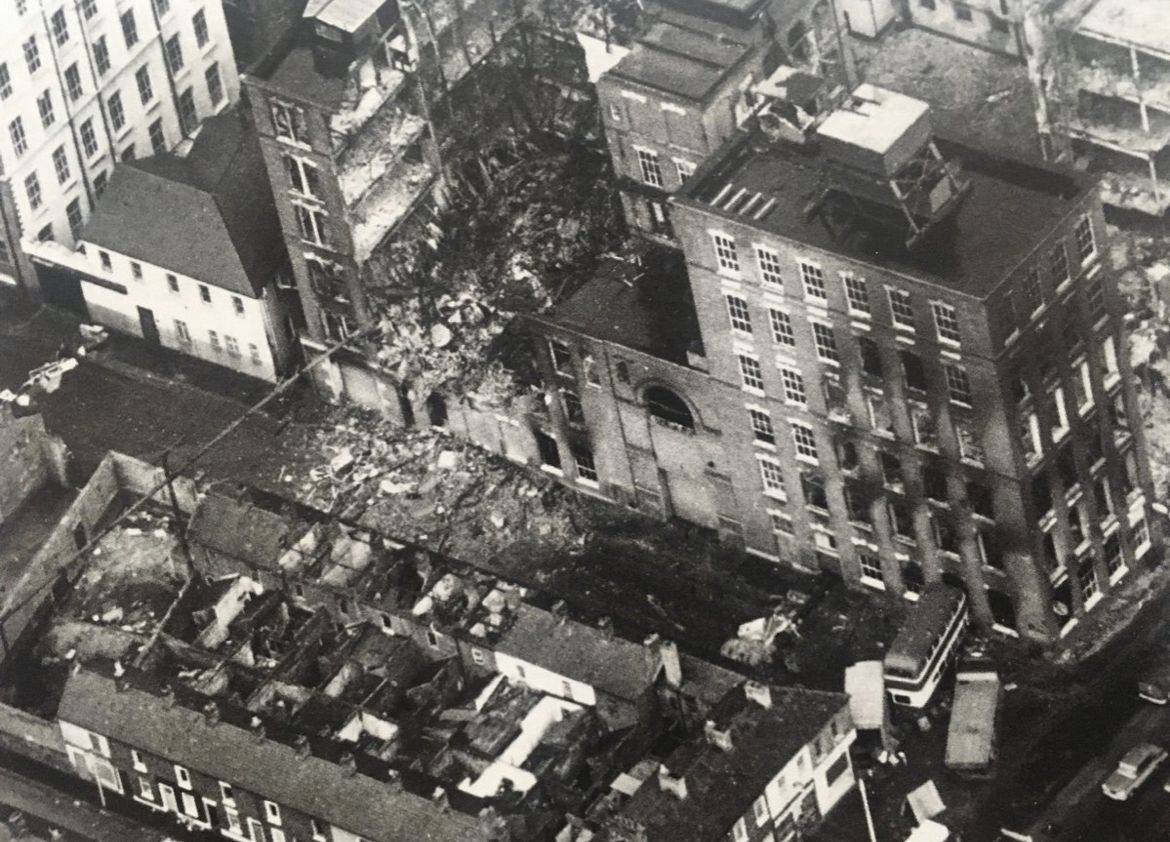 Conway Mill has been at the heart of West Belfast for over almost 200 years. First as a hard place of work for generations of local people, mainly women, and then as a community hub providing education and employment opportunities.

Conway Mill was built in 1842, in the decade of An Gorta Mór when thousands fled hunger across Ulster and the West, and came to Belfast seeking work and shelter.

Conway Street Mill was one of many flax mills across Belfast. Living and working conditions were dreadful. Hours were long and child labour was prevalent. Workers had no rights. They were hired and fired at the whim of employers.

Following partition many of these hardships, as well as the use of sectarianism and segregation, were reinforced by the unionist regime.

Life was hard for working people including working class Protestants. In the small back to back streets around Conway Mill overcrowding and poverty were endemic and discrimination against Catholics was widespread. The situation was made worse by the pogroms of 1969, which saw some of the streets and Mills in and around Conway Mill destroyed. By 1970 many of the Mills, including Conway Mill, were lying derelict.

In the early 1980s Tom Cahill came to me with an idea for a unique and innovative project for West Belfast. Tom proposed that Conway Mill should be bought and turned into a community enterprise project providing education, self-help and local employment opportunities. Tom deserves great credit for his vision and foresight. A small businessman himself, he could legitimately have developed the Mill in his own interests. I don’t think that even entered his head. Tom’s interest was in this community and its citizens.

In 1982 Springhill Community House opened the education floor in the Mill. Noelle Ryan, Elsie Best and other amazing women played pivotal leadership roles. Making it habitable and usable took a great deal of effort. Halla na Saoirse (Freedom Hall) was frequently used for the staging of plays written by local people, including Fr. Des. It was also used for debates, conferences, and occasionally for press conferences by Sinn Féin. Some of the most important press conferences during the early days of the peace process were held there.

A crèche was established and staffed by ACE (Action for Community Employment) workers and teachers and tutors were provided by the Workers Educational Association (W.E.A.) and the Ulster Peoples' College.

Regrettably, Conway Mill became a target for the British state. After the Mill hosted a community led public enquiry into the killing of a young man, John Downes, by a plastic bullet fired by the RUC in August 1984, the Mill was targeted for political vetting and the crèche lost its funding and workers. Businesses and community organizations were told that they would be refused funding if they moved into the Mill.

However, the management refused to be coerced or intimidated and continued to fundraise and to develop the Mill. In this they were enormously helped by friends in the USA.

Following the West Belfast and Greater Shankill Task Force report the Mill received substantial funding for regeneration, including from the office of First and Deputy First Minister.

The official opening of the refurbished Conway Mill, in November 2010, was a victory for the determination, vision and courage of that first Management Committee in the difficult years of the 1980s and all of those who have taken up that task since then.

Along the way, we have lost some who were with us at the start. We are deeply indebted to them all. The story of Conway Mill is the story of this community and of the great sense of solidarity and never giving up that exists in West Belfast. So, well done to all of you who are celebrating 40 years of Conway Mill.

The history of An Gorta Mór – the Great Hunger – runs deep in the Irish psyche. Few have not read of, or heard about, the unimaginable horror that the people of Ireland faced during the 1840s. Some label it The Famine although we know that there was sufficient food on the island to feed the people. Political decisions allowed over a million to die and millions more to take to coffin ships for other shores.

So, imagine if today your family, friends and neighbors were facing a desperate struggle for survival with the likelihood that many would be dead from famine by Christmas. That is the stark, brutal reality facing over seven million men, women and children in Somalia.

A decade ago it is thought that more than a quarter of a million Somalis died of hunger. Half were children under five. UNICEF and the World Health Organisation have been warning for months that the situation this time could be much worse.

Climate change has imposed four consecutive years of drought and Somalia now faces a fifth season with no rain. The result is that in a country with little infrastructure and limited resources over a million people, mainly women carrying young children, have been forced to leave their homes to try to reach emergency centers. The photographs and film images of desperate people and emaciated children and babies is shocking. The accounts of mothers burying their children at the side of roads is deeply disturbing.

Food aid and medicines are an immediate priority, but longer term strategies and supports are needed, including rehabilitating water points. There has also been a call for wealthy states to compensate Somalis and others for the catastrophic impact of climate change on their lives. In the UN this is known as “loss and damage financing” and it is on the agenda for the international climate change summit COP27 that is to take place next month in Egypt. In the meantime, make your voice heard in demanding greater aid for Somalia.

I understand from press reports that Bono says his wife Ali and he were targets for the IRA. That’s news to me and I’m sure to anyone else close to republican thinking back in the day.  Bono is also quoted in some news reports claiming that I hate him. Nope Paul, not me. You must be mixing me up with someone else. I don’t hate anyone. It’s a wasted negative emotion. I do detest imperialism - a good old fashioned word. Greed. Cruelty. Unbridled capitalism. War. Poverty. I believe in freedom. Solidarity. Equality. Community. Socialism. The Arts.

I think you’re a very fine song writer. I like U2’s music. Always have. And you do have a good voice. The focus you brought to the awfulness inflicted on people in the developing world is commendable. But some of your commentary on the conflict here was shrill, ill informed and unhelpful. However, you weren’t on your own. You echoed the Irish establishment line. It was the wrong line for decades.  A failure of governance and the abandonment of responsibility to lead a process of peace and justice. Thankfully, that changed. But it took a long time.

Despite this, some of us got through it all. With or without you. But no hard feelings. Many didn’t. Including friends of mine and family members. Now the conflict is finished. Thanks to all who contributed to that. There is a lot still to be done to remove its causes and to heal the hurt but we will get that done also and shape our own future. We all have a positive role to play in that. By working together. So go well chara. And good luck with the book.