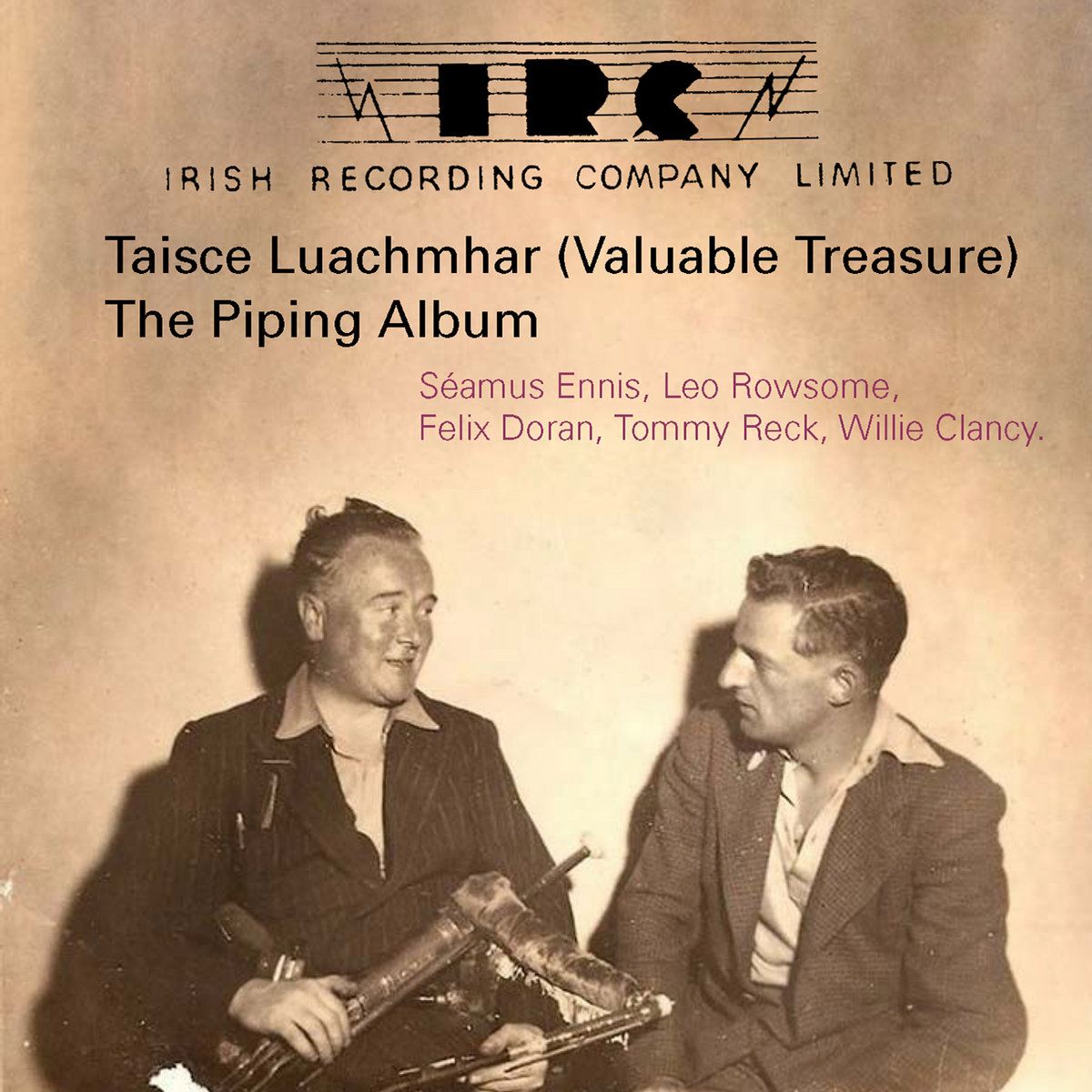 I love it when an album like this comes my way.  This week, I’ve been listening to – and relishing, really – “Taisce Luachmhar (Valuable Treasure): The Piping Album.”  It contains 19 tracks of uilleann piping recorded in the late 1940s/early 1950s and it features who’s-who of legendary pipers, including Séamus Ennis, Felix Doran, Tommy Reck, Willie Clancy, and Leo Rowsome (sometimes with button accordionist Sonny Brogan, sometimes with a piping trio, sometimes with a piping quartet).  Released by Na Píobairí Uilleann, it’s an album that sets an extraordinary standard for piping reissues and it’s one you gotta have.

To start, this is a companion to “Taisce Luachmhar (Valuable Treasure) – The Fiddle Album,” an album I wrote about in October that I called “an absolute revelation.”  This is every bit that album’s equal and is a product of the same story.  To paraphrase last year’s column, these recordings were made by Bill Stapleton, a Kilkenny-born Dubliner, for the “Irish Recording Company,” a label he ran from 1948 into the early 1950s.  After World War II, Stapleton considered a career in the music business and in pursuit of this dream bought a portable disc cutter and began working for RTÉ, while simultaneously traveling the country making the recordings he hoped would be the basis for Ireland’s first traditional music label.

The dream never bore fruit.  Unfortunately, a potential U.S.-based business partner of Stapleton’s released a small number of his recordings surreptitiously c.1950 (see below).  Thinking this had broken the trust of the musicians with whom he collaborated, he shut down the label and moved to London, where he got into broadcasting.

Before leaving, he gave the original acetate discs that would be the basis for the label’s catalog to Breandán Breathnach, who stored them away.  In the 1980s, legendary broadcaster and master engineer Harry Bradshaw took stewardship of the acetates and left it until lockdown to transfer, restore, and prepare them for release.

The results are magical.  My impression on first listening is that it is so interesting to have all these great pipers in one place because it makes the individuality of each one so easy to hear from track-to-track.  This would be intrinsically obvious to any piper who listens, but there’s a certain clarity to be had here for the non-initiate.

Once you’re beyond that, it becomes very, very easy to appreciate the beauty in each piper’s music.  Ennis’s elegance is really stunning.  Tommy Reck’s tracks are brilliant, and it’s amazing to have Doran’s beautiful (and sort of hard to come across) playing so easily accessible.  All these tracks are amazing.  Of particular interest are Rowsome’s duets with button accordionist Sonny Brogan, and Rowsome’s piping trio and quartet tracks.  “The Medley of Country Dances” (w/Brogan) and “The Jacket’s Green / …” (trio) are particularly fun. Rowsome’s music is outstanding and well represented here.  This is must-have music for pipers.

In addition to the piping rarities, there are two songs from Seamus Ennis, rendered with piano accompaniment.  These have a fairly genteel feel, are an unexpected treat, and are fascinating.  It adds some variety and a special window into Ennis’s world.  (If you’re looking for a fun project, read “Going to the Well for Water: The Seamus Ennis Field Diary 1942-1946” [Cork University Press, 2010] and then listen to these!).

For those interested in such things, five of this album’s tracks have been previously released.  Two of those by Felix Doran (“Pigeon on the Gate / …” and “Doran’s Fancy / …”) and two by Tommy Reck (“The Scholar / …” and “Alexander’s / …”) were issued by Boston’s Copley Records, as mentioned above.  Felix Doran's duet with John Kelly (“The Sligo Maid / …”) was released on “Taisce Luachmhar (Valuable Treasure) – The Fiddle Album.”

A note on the album’s “archival” aspect: Stapleton was indeed a fine recordist who had a good sense of how to best capture an instrument’s sound – the recordings themselves are lovely.  Although these sides were transferred from 78rpm discs, the materials Stapleton used were better than those used in the very early days and allow for a superb overall sound quality.  This being said, there are spots in some of the tracks that exhibit minor issues, which represent deteriorations of the source material.  They do not detract from the quality or importance of the collection in any way.

This is an album of brilliant and historically important piping, and should be in the collection of any serious traditional music lover.  Simple as.  “Taisce Luachmhar (Valuable Treasure): The Piping Album” is available through NPU’s website, pipers.ie.