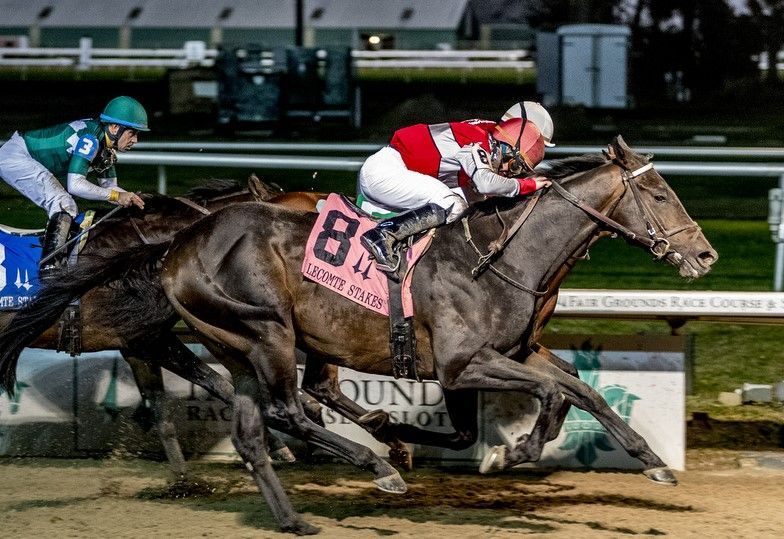 Call Me Midnight, James Graham aboard, ranges up on the outside to win the LeComte Stakes at the Fair Grounds in New Orleans. HODGES PHOTOGRAPHY

Here’s an angle for you – look for a horse ridden by James Graham and trained by Keith Desormeaux in a 3-year-old stakes race at the Fair Grounds. They cashed in the Risen Star Stakes there in 2013 with Ive Struck a Nerve at odds of 135-1 and worked their magic again on Saturday in the LeComte at the relatively paltry price of 28-1.

Graham needed every yard of the stretch to get Peter Cantrell’s Call Me Midnight home by a nose in this Grade 3 prep for the Louisiana Derby. The 3-year-old colt reeled in favorites Epicenter and Pappacap in the final strides to trigger a $59.00 win mutuel.

“They went quick early,” Graham said. “He settled real nice. Halfway down the backside, I said, ‘Man, I’m going to get a piece of this.’ He was getting to [the leaders] easy without me having to ask him. Halfway around the second turn, I said, ‘Well, I just need a spot to go.’ I wheeled him out down the stretch, gave him all the daylight, and he flew home like he did at Churchill when he broke his maiden. He did it the right way and finished it off perfect.”

Call Me Midnight is now 2-for-7 in his career. Graham has ridden him twice, both victories. The colt is likely to reappear in the Risen Star on Feb. 19.

Earlier on the card, Graham won a four-way photo aboard Tiz of Thee in a maiden special weight mile on the grass. The Tom Amoss-trained colt, which was involved in the 14-horse scramble, paid $20.40 to win.

Graham also won two races on the Thursday card and another on Friday. The 2021 leading rider at the New Orleans oval, the Dubliner is currently third in the standings with 28 wins, trailing Colby Hernandez (38) and Reylu Gutierrez (32).

The round-trip van rides up I-95 to Parx were worth the trouble for Laurel-based Cathal Lynch. He won two races at the suburban Philly oval on both Tuesday and Wednesday last week. The skein got rolling on the heels of his own Wonder City, a 5-year-old mare that has been descending the claiming scale in recent months to little good effect. The $7,500 plateau appears to suit her, though, as she demonstrated via a gutsy half-length rallying victory in Tuesday’s second race. She paid $4.20 to win.

Then, in the sixth race, Lynch got a maiden-breaking win out of third-time starter Undercover Kitty, owned by Runnymoore Racing. The 3-year-old Penn-bred gelding shot to the lead entering the stretch and ran off to win this mile by three lengths. He paid $8.20 in the win column. Jaime Rodriguez rode both Lynch winners.

Wednesday brought two more first-time winners. Lynch cut Call the Po Po, owned by On Your Left Racing, in claiming price from $20,000 to $10,000 for the 4-year-old filly’s second start. She vied for the early lead under Rodriguez, won that battle and then won the war by one and one-half lengths. She paid $3.80 and was claimed.

Lynch gave Mychel Sanchez the seat on Runnymoore’s Loose Ends in the sixth race and greeted the pair in the winner’s circle after they reached the wire in front by one length. This one, too, needed three races to find his winning stride. He returned $8.60 to win.

Jim Corrigan rarely sends out a first-time starter, so it was noteworthy when he saddled Gun Rush, owned by Two Hearts Farm, in Saturday’s second race, a maiden claiming sprint, at Turfway Park. The result made it especially so. Javier Padron-Barcenas took his time getting the 3-year-old homebred gelding into the mix but the rookie ran to his name, reaching the wire in front by almost two lengths. He paid $26.20 to win.

John Ennis won consecutive races on the Sunday card at Turfway. In the sixth race, he got a second career win out of La Bahia Stud’s Niagara Gold, a 6-year-old gelding that had just broken its maiden last month. Jockey Luan Machado began a rally around the far turn that gave the gelding a clear lead into the turn. They lasted at the wire by a neck for the $9.00 win mutuel.

Ennis came right back in the next race with Mark Arnold’s Divine Leader, a 5-year-old gelding that bossed a field of first-level allowance/optional claiming sprinters by three lengths. Machado was also on this winner, which yielded $5.20 to win.