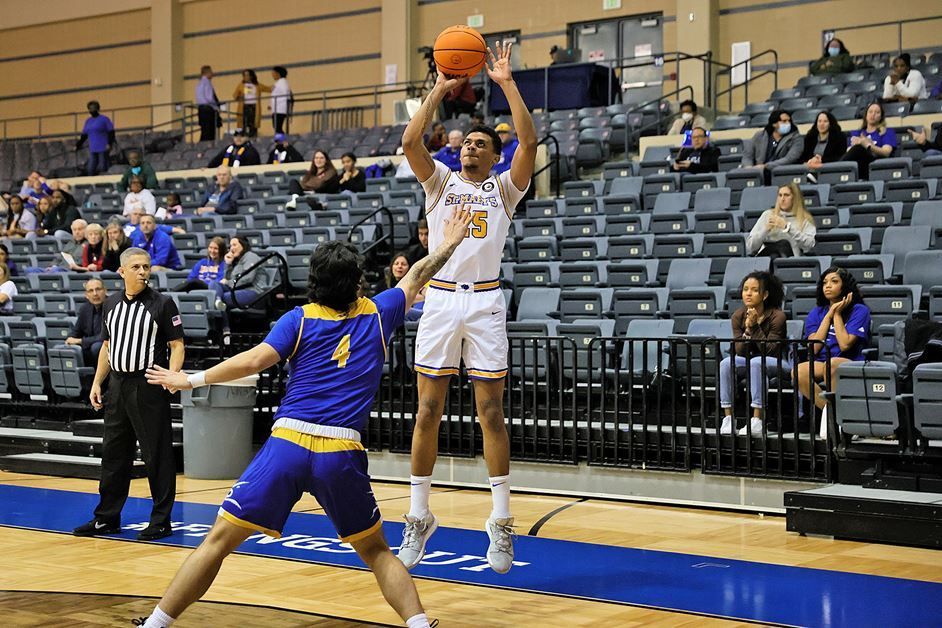 field goal tries (one of three from long range) as well as both his free throws. The Rattlers are 5-7.

C.J. Fulton put 12 points on the scoreboard for Lafayette in Thursday’s 74-60 loss to Loyola (Md.) in Baltimore. The 6-2 freshman guard from Belfast made four of six attempts from the field, including both his heaves. He was also perfect on two free throws and got credit for four assists. The Leopards improved to 4-11 on Sunday when they defeated Army, 68-64, in Easton, Pa. Fulton scored eight points on 2-for-5 shooting (all from outside the three-point arc) and 2-for-2 at the foul line. He also assisted on five buckets.

California’s Sam Alajiki was perfect on three field goal attempts in a 64-55 road loss to Washington on Wednesday. The 6-7 freshman forward from Dundalk saw 14 minutes of action and scored seven points, while grabbing three rebounds. The Bears are 9-9.

Bronagh Power-Cassidy scored 15 points to help Holy Cross defeat Colgate, 62-57, in Worcester, Mass. on Saturday. The 5-10 sophomore from Dublin hit on six of 13 field goal attempts, including two of four from downtown, and one of two foul shots. The Crusaders are 9-6.

Enya Maguire came off the bench to contribute six points for Houston Baptist in an 82-74 win over McNeese in Lake Charles, La. on Saturday. Maguire, a 5-4 sophomore guard from Belfast, lofted three attempts from three-point land and made two. The Huskies are 5-9 overall and 1-0 in Southland Conference play.

Dylan Egan contributed seven points to Wagner’s 139-102 victory over the College of Staten Island in the latter’s pool on Saturday. Egan, a freshman from Swords, Co. Dublin, took second place in the 100-yard individual medley with a time of 59.81 in a race won by teammate Kristian Stanczewski in 58.50. Egan also got third place in the 50-yard freestyle, finishing in 23.61 against teammate Jack Leighton’s winning 22.24.

Rhasidat Adeleke, a University of Texas freshman from Dublin, finished second in the women’s 300 meters at the Clemson Invitational in South Carolina. Her 36.87 was topped only by Florida’s Talitha Diggs, who broke the tape in 36.37. She also ran the third leg for Texas in the 4x400 meter relay. The Longhorns came in second.

Columbia made the trip to Lewiston, Maine worth the bother as they pinned a 9-0 defeat on Bates last Tuesday. Ellie McVeigh, a Belfast junior, held down the 4 position for Columbia, defeating Ella Lungstrum, 11-8, 11-7, 11-2.