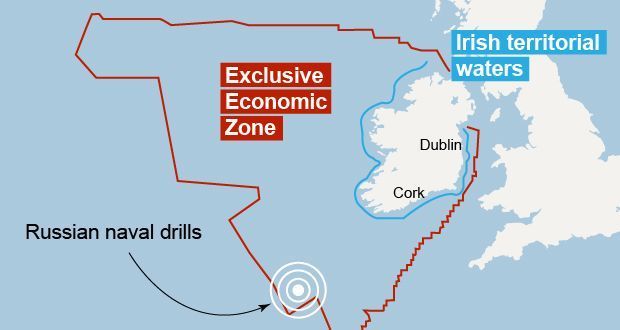 Irish Fishermen Take on the Russians

The Russians are coming. So are the Irish fishermen.

Scores of Irish fishing boats are planning to head for the area of the Atlantic where a Russian naval flotilla is planning to undertake war exercises next week.

The exercise area is a key fishing ground for the Irish and is in Ireland's maritime Exclusive Economic Zone.

But for what the Russians are planning the area is considered international waters.

Irish fishing representatives have met with the Russian Ambassador to Ireland Yury Filatov and have praised his "wealth of knowledge" on "the complexity of the situation."

The naval exercises, which will involve live fire, will take place 160 miles off the Cork coast over five days starting Thursday, February 3.

The fishermen have objected on the grounds that the activity is a threat to marine life and fish stocks in the area.

As many as sixty Irish trawlers are planning to fish in the waters where the Russian exercises are being planned. February 1 is the date when the annual prawn fishing quota begins so the trawlers would likely have been in the area even if the Russians were not.

RTE reported that Michael Creed, the former minister for agriculture and marine, has said the situation cannot be divorced from the broader global context, which is the Ukraine crisis. He pointed out that this is the first time that Russia has sought to do a naval exercise in the area. Creed said the Russians are being deliberately provocative.

Indeed, reports have pointed to the fact that the exercise area sits atop an area of ocean where vital internet cables linking Europe and North America.

One view is that the Russian presence is a threat in the context of an invasion of Ukraine. The North Atlantic covers millions of square miles so why the precise location of the exercises?

Any response from the U.S. and NATO deemed hostile by Moscow could lead to the cutting of the internet cables. That would be economically disastrous.

An MSNBC report pointed to two instances of the mysterious cutting of cables off the coast of Norway last year. Some of those cables linked devices on the ocean floor designed to detect the movement of submarines.

And last August a Russian oceanographic ship, the Yantar, turned up without notice off the Donegal coast. Intelligence agencies suspect the Yantar is a spy ship with the ability to cut undersea cables. The ship also appeared off the Mayo coast.

The planned action by the Irish fishing fleet has highlighted one issue that is now being debated anew, and vigorously. And that is Ireland's clearly limited ability to militarily defend its territorial waters and airspace.