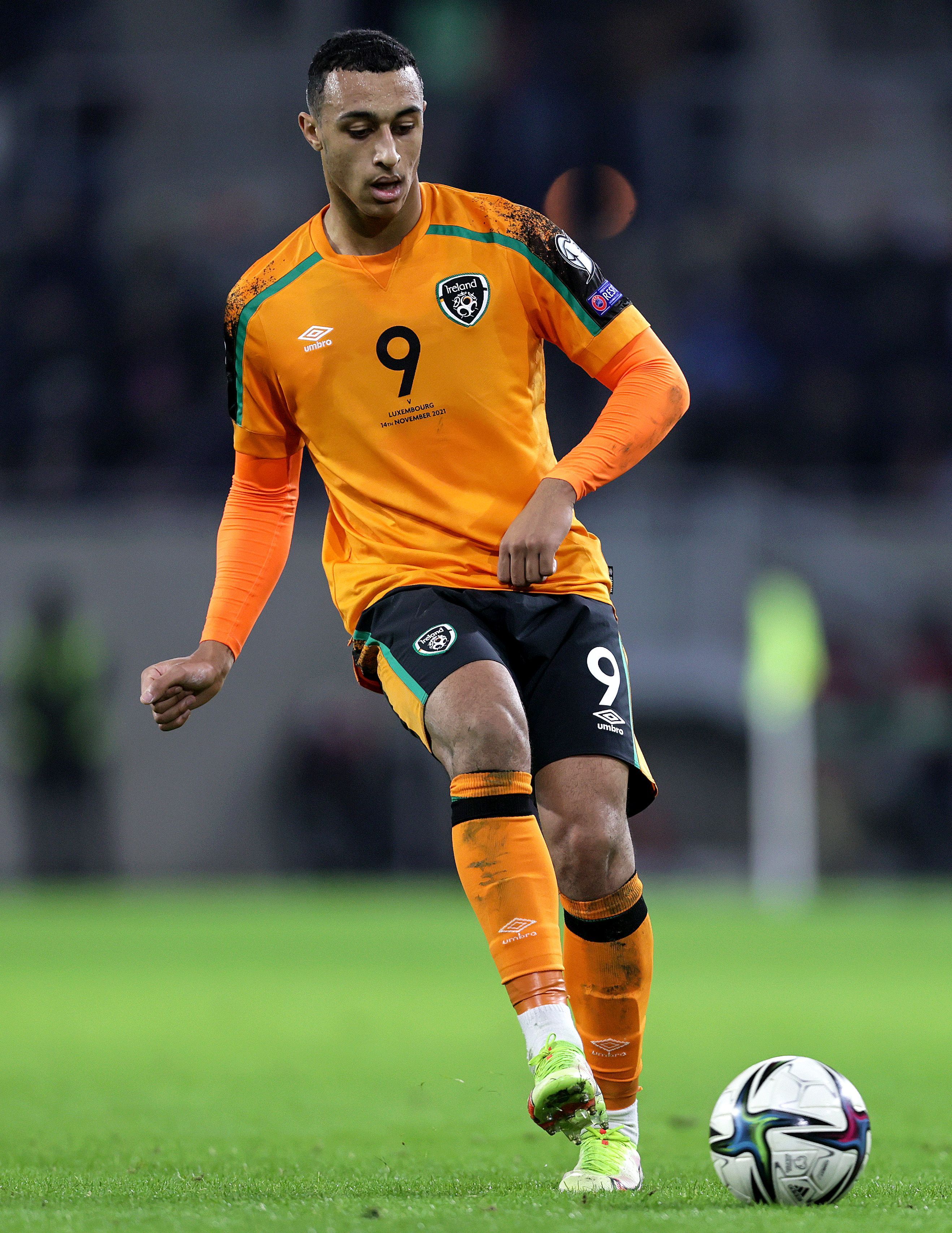 Adam Idah got his Premier League debut goal, a vital one for Norwich. INPHO/LASZLO GECZO

Republic of Ireland striker Adam Idah got his first-ever Premier League goal on Saturday in Norwich’s 2-1 win over Everton at Carrow Road. A Michael Keane own goal put the Canaries 1-0 in the 16th minute, with Idah following up 90 seconds later with a well-taken effort. Richarlison scored in the 60th minute for the Toffees, and the home side hung on. That made Idah’s debut goal at the top level the winner in the first three-point result for Norwich since November. It gives them some hope as they battle relegation in coming weeks and months.

Probably not as much hope as Newcastle United who have plenty of Saudi money available to try and buy their way out of the drop zone. Last week the Geordies brought in England international Kieran Trippier from Atletico Madrid and New Zealand international Chris Wood from Burnley. Neither of the Irish players with the club, Ciaran Clark or Jeff Hendrick were in the  matchday squad on Saturday.

Manchester City manager Pep Guardiola last week picked up the Manager of the Month award for December, the 11th time he has won the award. Pep is now in third place in the managerial monthly awards, behind Arsene Wenger who won it 15 times, but he has work to do to catch former United manager Alex Ferguson who won the award a staggering 27 times. Pep is also doing well in January and on Saturday City beat Chelsea 1-0 thanks to a goal from Kevin De Bruyne to stretch their lead over Liverpool at the top of the table to ten points. On Sunday the ‘Pool, without Sadio Mane and Mo Salah, who are playing for their respective countries, Senegal and Egypt in the African Cup of Nations, beat Brentford 3-0 at Anfield.

Meanwhile across Stanley Park Everton sacked manager Rafael Benitez on Sunday 24 hours after the defeat to Norwich. The Spaniard, who previously managed Liverpool, was named as Carlo Ancelotti’s successor last June. Everton, have won only one of their last 13 EPL games this season and sit 16th in the table, six points above the relegation places. When he was manager of  Liverpool Benitez called Everton a small club. Danish national manager Kasper Hjulmand is the early favorite, with Wayne Rooney, currently managing Derby County, also in the running for a possible return to Goodison Park.

Everton’s Iranian-born owner Farhad Moshiri was aware of the potential pitfalls surrounding the notion of bringing the former Liverpool manager to Goodison Park, but he took a gamble and failed. On Saturday Everton’s travelling supporters demanded Benitez  “get out of our club,” while one fan invaded the Carrow Road pitch in an attempt to confront the Spaniard. Benitez was only the second man to manage both Merseyside clubs; the first was Dubliner William Edward Barclay. Barclay, who was born in Dublin in 1857, managed Everton from 1888 to 1889 and Liverpool from 1892 to 1896. Seamus Coleman, who was a regular under Benitez, started against Norwich on Saturday.

Manchester United knocked Aston Villa out of the FA Cup last week and on Saturday they led Villa 2-0 at Villa Park. But the Birmingham club fought back and Philippe Coutinho, who is on loan to Villa from Barcelona, got the equaliser in the 81st minute. Tottenham Hotspur were annoyed that their North London derby against Arsenal was postponed on Friday, due to Covid 19, injuries and players on Africa Cup of Nations duty. Arsenal were entitled to seek a postponement as they had fewer than the required number of outfield players, which is 13,  available.

Chelsea will play either Arsenal or Liverpool in the League Cup final on Feb. 27. Last week the Blues beat Spurs 1-0 to win their semi-final 3-0 on aggregate. On Thursday Liverpool and Arsenal drew the first leg of their semi-final 0-0 at Anfield; the second leg is at The Emirates tomorrow (Thurs) night. Thomas Tuchel who has been in charge of Chelsea for just 355 days, is the first manager to lead the Pensioners to finals of the League Cup, FA Cup and European Cup.Republic of Ireland international Cyrus Christie has shown his commitment to Swansea City by taking a financial hit with his loan move from rivals Fulham, his new employers have said. Christie, who made his debut for Swansea in their 1-1 draw with Huddersfield on Saturday, ended a frustrating spell with Fulham, where his last league appearance was in August 2020. Fulham, who beat Reading 7-0 in midweek, beat Bristol City 6-2 on Saturday to go back on top of the Championship table. On Saturday Serbian Mitrovic got a hat-trick to bring his goals tally for the season to 27. Mark Travers was in goal for Bournemouth, who hold on to second place, despite losing 3-2 away to Luton. Meath-born Darragh Lenihan captained Blackburn Rovers, who stay third after a 1-0 away win over Cardiff. Galway-born Aaron Connolly, who recently left Brighton for a loan period at Middlesbrough, made his debut for ‘Boro, who beat Reading 2-1 on Saturday and they hold on to 6th place in the table.

Meanwhile Dara O’Shea, who has been out of action since breaking his ankle against Portugal last September, should be back playing for West Bromwich Albion next month. Albion manager Valerien Ismael said: ‘‘The good news is that Dara has made great progress and he is back in full training now. He will need maybe another couple of weeks of  training to get his confidence back.’’ O’Shea was a regular with West Brom and Ireland prior to his injury early in the first half of the World Cup qualifier against Portugal in Faro.

CANTONA SAYS ‘NO’ TO QATAR

Former Manchester United star Eric Cantona says he is not in favor of this year’s World Cup being played in Qatar. The outspoken Frenchman said: ‘‘To be honest, I don’t really care about the next World Cup. It’s not a real World Cup for me. I am not against the idea of hosting a World Cup in a country where there is a possibility to develop and promote football, like in South Africa or in the United States. But Qatar, it’s not the country of football. It’s only about money and the way they treated the people who built the stadiums, it’s horrible.” Already players from Germany, Norway and the Netherlands have worn t-shirts voicing their concerns over human rights in Qatar ahead of their World Cup qualifying games.

Shelbourne want to bring former Irish international Wes Hoolahan back to Ireland. Hoolahan is settled in England and currently  has no plans to move home to Ireland in the longer term, but he has spoken Shels, who will play in the Premier Division of the League of Ireland this season.  The 39 year-old Dubliner remains an important player for Cambridge, so a summer move is the only realistic scenario. Hoolahan’s contract with the League One expires at the end of this and he is still a big part of Mark Bonner’s plans for the remainder of the campaign. Hoolahan and his family live in the Norwich area, the club where he enjoyed his best days in England. He operates off a slightly different schedule to the rest of the squad, and family considerations would be a big part of the equation if he was to consider a short-term relocation to Ireland.

Celtic have added another former League of Ireland player to their ranks with the signing of Johnny Kenny from Sligo Rovers. A couple of months back  Irish international defender Liam Scales left Shamrock Rovers for Parkhead.

Meanwhile Finn Harps manager Ollie Horgan believes that new signing Bastien Hery will be a big addition to Finn Harps next season. The midfielder, a full international with Madagascar, was a free agent after disappointing spells last season with Bohemians and Derry City and Harps swooped to make him the fifth signing ahead of the 2022 campaign. Horgan said: ‘‘Bastien is a talented lad who will give us a lift, especially going forward. He knows the league well, and knows what it takes to get results in what will be a very tough Premier Division. Hery was born in Paris and first arrived in Ireland in 2017 when he joined Limerick and he later lined out for Waterford and Linfield. He joined Bohs at the start of last season but managed just four league appearances before being loaned out to Derry.

The Echo has one less reader this week. My older brother Frank, who emigrated from East Kerry to New York back in 1962, died last week at age 76. In the Big Apple, Frank, who worked for Glenn Partition during his career, bought the Irish Echo every Wednesday morning. (Editorial note: An obituary for Frank appears on the top of Page 61.)