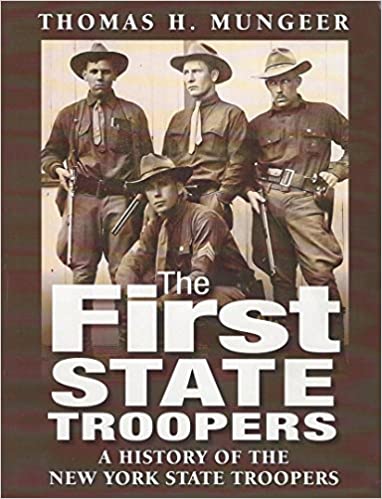 Mungeer is President of the New York State Troopers Police Benevolent Fund. So he holds much in trust.

He also holds something else in trust: the story of the New York State Police, a storied history that he has recorded in a book entitled "The First State Troopers."

Mungeer, a native of Liberty in Sullivan County, and a proud father of four, will be honored as the Irish Law and Order Leader of the Year at the Echo's annual Law and Order Awards gathering in Manhattan tonight, Firday.

He will share the spotlight with his book, the story of a police force that is in many ways a family.

"I was always interested in my own family roots," says Mungeer.

Many of those roots can be traced back to Ireland, specifically counties Cork and Galway, and Mungeer, in his research into those roots, became something of a genealogical sleuth.

It was only a matter of time, then, before his interest in those who paved the way for the present generation would be passed from personal family to his working family, the New York State Police.

That force began to take form after the 1913 murder of Sam Howell, a construction foreman in Westchester County, and the failure of the local police to arrest suspects he had named before his death.

In those days, according to Mungeer, perpetrators could simply flee one local jurisdiction and hide out in another.

That's the shorthand history line. But who were the individuals making up the first State Police roster?

That was a question that Thomas Mungeer would ask himself.

Says Mungeer: "Looking initially at that original roster, they were just names. But who were they? Who were their people? Where did they come from?"

Using genealogical tools he had become familiar with while researching his family, Mungeer was able to identify most of the men from those first days of the State Police though, he acknowledges, one or two have been lost to history.

"They were a formidable bunch," he says of those first State Troopers.

And indeed they look the part on the book's cover. The four men shown look like they could have galloped up San Juan Hill with Teddy Roosevelt.

And gallop they did. The early troopers rode horses around New York State and its 62 counties and 54,555 square miles.

New York was not the first state to have a state-wide police force. That distinction goes to Pennsylvania.

But Mungeer is both quick and keen to point out that New York was the first state to bestow the title of "State Troopers" on its State Police members.

Those early State Troopers trained at an army facility outside Syracuse, and when their existence was made official there was, he says, "quite a fanfare" with considerable newspaper coverage and an appearance, on horseback, at the New York State Fair.

The days of pursuing the bad guys in a saddle are long gone. Today's New York State Troopers are part of a 5,000-strong highly mechanized and technologically aided law enforcement agency that also employs hundreds of civilian personnel.

The story of how then became now is one well worth the telling, according to Mungeer, who, appropriately enough, is the current Chairman of the National Troopers Coalition.