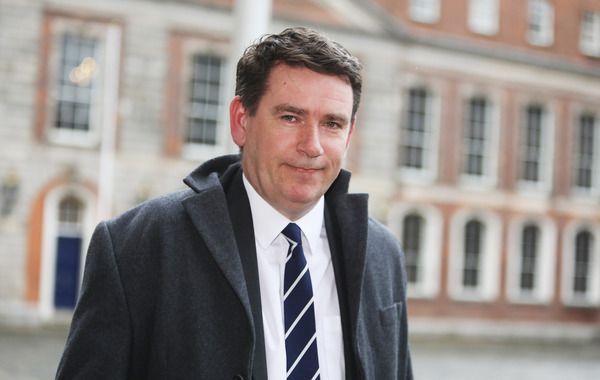 Ireland's Department of Foreign Affairs has defended its record with regard to working on behalf of the undocumented Irish in the U.S.

But it has conceded that its ability to influence U.S. policymakers on the travails faced by the undocumented has been less than it might have been in recent years.

The department is pointing to the Covid-19 pandemic as a reason for the relative lack of contact with legislators in Washington.

The defense and concession comes after criticism of the department voiced by former Fine Gael TD John Deasy.

Deasy once acted as an Irish government envoy to Capitol Hill. He is now filling the same function on behalf of the Ancient Order of Hibernians.

It is in that new context that Deasy publicly leveled criticism at Foreign Affairs - criticism that came to light in reports in the Irish Times, and in the Irish edition of the Times of London.

In response to those reports the Department of Foreign Affairs, according to a follow-up Irish Times account, has insisted that addressing the situation facing the undocumented Irish in the United States has been a top priority for successive governments and remains so for the current three-party coalition.

The Irish Times report stated: "However, it has accepted that the Covid-19 pandemic has limited its scope for influencing policy-makers at the highest level in the U.S. over the past two years.

"The defense of its record in this regard follows criticism from the former Fine Gael TD John Deasy and influential Irish-American representative group, the Ancient Order of Hibernians (AOH), that the Government had taken its eye off the ball when it came to the interest of Irish citizens resident in the U.S.

"The AOH told the Irish Times this week that there was a need for stronger advocacy in Washington DC on Irish-American Issues and for Irish people living in the U.S.

"The AOH is believed to be of the view that Irish diplomatic strategy in the US focused too much on other matters, including winning a seat on the UN Security Council.

"Mr. Deasy, now the head of Government Affairs for the AOH, also said the view in America was that the new management team in Iveagh House (headquarters for DFA) needed “to get the department back to basics."

The report pointed out that the Department of Foreign Affairs "did not directly address the criticisms but responded by defending its record on representing Irish citizens, including undocumented people, in the U.S."

A spokesman said that immigration issues continued to be raised on an ongoing basis through engagement at all levels with the U.S. administration and political leaders.

“Minister for Foreign Affairs Simon Coveney also raised immigration issues in meetings on Capitol Hill on his most recent visit to Washington, DC.”

The department, according to the Times account, said that there was ongoing engagement to seek more immigration pathways for Irish citizens “at all levels."

It said the department was active on Capitol Hill with members of the Senate and the House of Representatives and had also worked to deepen and strengthen bilateral relations with President Biden’s administration.

“Immigration issues, including possible pathways to citizenship, are a priority for president Biden, as demonstrated by his proposed U.S. Citizenship Act of 2021. Ireland will continue ongoing engagement with his Administration as well as with the U.S Congress, on a bipartisan basis, as they pursue comprehensive immigration reform in the U.S.,” said the spokesman.

The spokesman added that through the Irish Embassy in Washington, D.C. the Irish government has continued it efforts to get the U.S. to broaden the existing E-3 Visa Bill to include Irish citizens

“If passed, it could allow access of thousands of U.S. visas each year to Irish citizens, providing new opportunities to live and work in the U.S.,” he said.

Meanwhile, in the Dáil, the Sinn Féin TD for Meath West, Johnny Guirke, raised the issue of the undocumented saying the plight of undocumented Irish in the U.S. needed to be taken right back up the agenda. He said any Irish person without U.S. papers who lost work during Covid would have had no income over the past two years.

Stated the Irish Times in its report: "Responding for the Government, Minister for State Mary Butler said the issue of undocumented Irish was a priority for the Irish Embassy in Washington, D.C. However, she accepted that the pandemic had had an impact.

“'The scope of high-level meetings at senior political level has been limited because of Covid-19. The return this year of high-level visits will strengthen the ability of the Irish Government to develop strong political relationships [at the highest level],'” she said.

“Through our Embassy in Washington DC, as well as our Consulates across the U.S., the department works closely with Irish groups across the United States.

“The Government continues to provide support and significant annual funding through the Government’s Emigrant Support Programme to the U.S. Coalition of Irish Immigration Centres, which provides support to Irish citizens, in particular to the undocumented Irish who are seeking to regularize their status.”

The spokesman added that a dedicated Covid-19 Response Fund for Irish Communities Abroad was set up last year to help these organizations meet the needs of those who are particularly vulnerable.

“In 2021, over €4.2 million was paid to diaspora organizations in the US for emigrant support and Covid-19 related projects.”

The issue of the undocumented has, of course, been a front line one in Irish America for years, decades.

The ability of Irish politicians and Ireland's diplomats to cajole and persuade legislators in Washington to act on behalf of the undocumented Irish - invariably against the backdrop of the overall immigration issue  legislation affecting all nationalities - waxes and wanes depending on which party controls Congress, which party controls the White House and, at times, the attitude towards an initiative on the part of even a sole legislator on Capitol Hill.

Such was the case in 2018 when agreed bipartisan E-3 legislation that promised the possibility of visa for the Irish was stymied by one senator, Tom Cotton of Arkansas. Cotton, as he can do as a U.S. Senator, placed a "hold" on the initiative and it has been in political limbo ever since.

And then there is the office of president.

The Irish Department of Foreign Affairs would not have been alone in facing a veritable buzz saw of disinterest, and indeed outright hostility, if or when it raised the issue of the undocumented Irish during the fours years of the Trump administration.

Covid-19, towards the end of those four years, was a natural impediment to discussion and progress but really only served to top off an existing political dead stop on immigration reform that might have included relief for the undocumented.