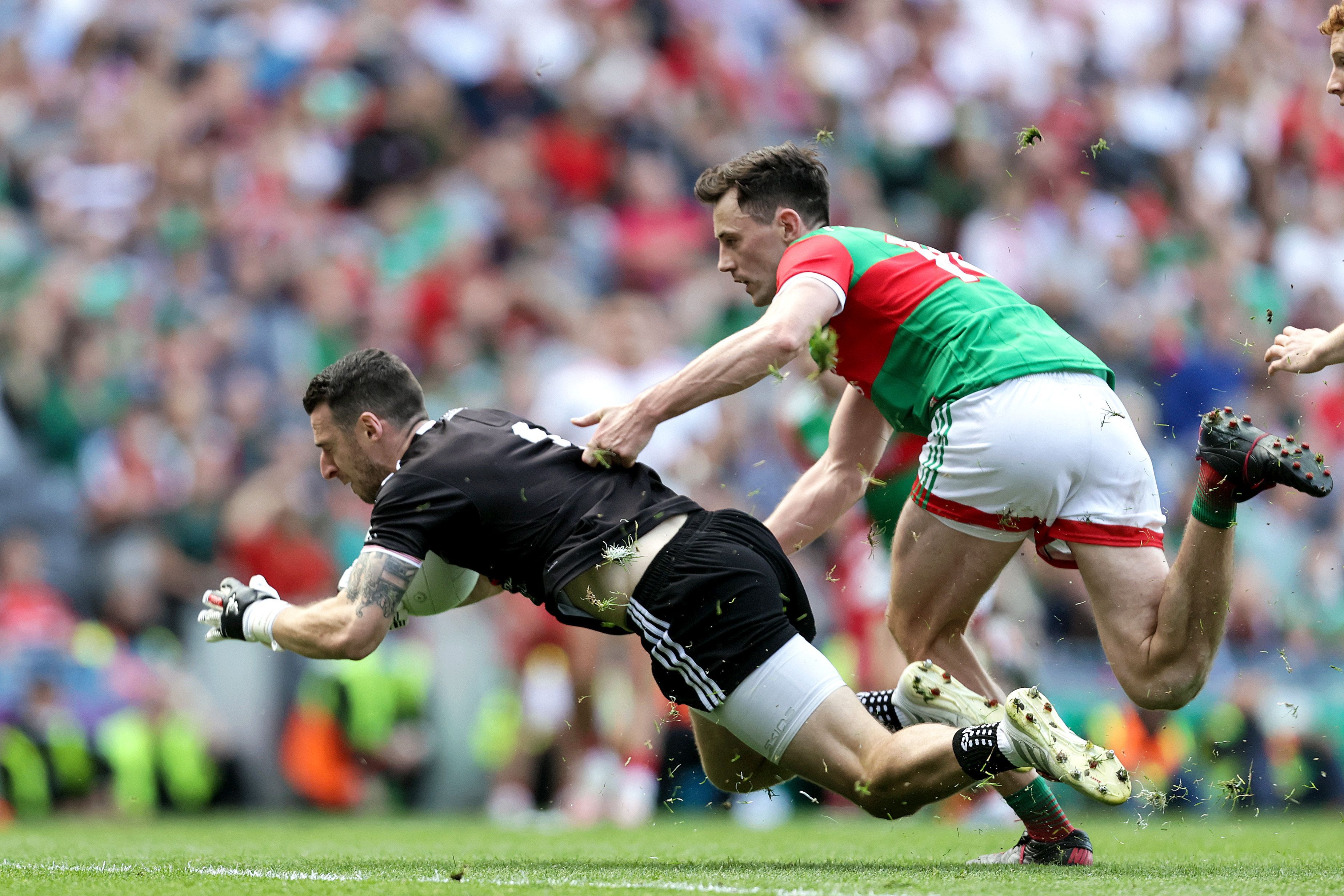 Tyrone goalkeeper Niall Morgan is challenged by Mayo’s Diarmuid O’Connor in the All Ireland football final on Sept. 11. INPHO/LASZLO GECZO

Dublin, Kerry have eyes on prize

Notwithstanding the variants that Covid-19 is spitting out at us as it attempts to play spoilsport with leagues and championship among other more serious things, the march of time to another year means we sit down to work out who will rule the roost in the Gaelic world of 2022?

Given that football normally includes every county bar Kilkenny, and not forgetting New York and London, it is apposite that we start there rather than in the 10-county competition that passes for the All Ireland hurling championship.

After the Dublin’s unprecedented domination to win six successive titles before succumbing to Mayo in last year’s All Ireland semi-final, there are many questions to be answered.

For instance can Tyrone kick on and turn their fourth ever Sam Maguire victory into back-to-back wins, given that they beat every big team bar Dublin in annexing the crown in 2021.

And what of Dublin? Unlike the Kerry super team of the 1970s and ‘80s, who grew so old together that they were unable to score for 35 minutes in losing to Cork in 1987, the current Dublin team has been rejuvenated almost on an annual basis with the advent of fresh blood to go with the established stars like Ciaran Kilkenny, James McCarthy and Brian Fenton.

Dessie Farrell managed to win one title to add to Jim Gavin’s five but with Jack Caffrey and Paul Mannion opting out last year on top of Stephen Cluxton retiring unofficially as well as a whole host of other old timers bowing out, he faced an upward trajectory to keep the team going.

The fact though that his squad – which suffered a lot of adverse reaction for training during Covid – has also managed to get the longest rest in seven years in terms of off-season may act as a blessing in disguise.

I expect Farrell to see the likes of Brian Howard, Con O’Callaghan and Niall Scully refreshed when it comes to running the legs off opponents in Croke Park come the new year.

So the warning signs were there; however it would be foolish to write Dublin off on those games as they still have arguably the strongest squad in the country.

Tyrone’s rejuvenations without Mickey Harte in control was astonishing as joint managers Brian Dooher and Fergal Logan managed to turn bit-players under the previous regime into All-Stars during their first year at the helm.

Of course unlike Kerry or Dublin, Tyrone have the Ulster championship to contend with where every game is potentially a booby trap. Winning this provincial title is similar to other counties winning All-Irelands such is the level of intensity and rivalry between the neighbors in this area.

There was a time when in the event of counties cancelling themselves out in an “ordinary year of standards” that inevitably Kerry were the ones to bring Sam home.

As they have found out recently, that is no longer the case as they have been no match for Dublin or many of the northern teams when it matters most.

So in the event of such an emergency and despite the good work done under Peter Keane, the Kingdom’s County Board pulled the rug from under the incumbent of the past three years and installed Jack O’Connor as team boss for the third time this millennium.

In some ways, it is hard to blame them because O’Connor has always delivered the goods both at minor and senior level when his county has come calling.

O’Connor was ratified alongside former stars Micheál Quirke and Diarmuid Murphy as selectors, with Paddy Tally also on board.

County chair Tim Murphy went after O’Connor while he was still Kildare boss but defended his reasons for getting him back. It was tough on Keane, who got on well with many of the players, but when you don’t win All Irelands in Kerry, you are on a slippery slope, aren’t you?

O’Connor doesn’t have to be told how the Kerry public response to failure and success – he has experienced both situations. However, what he knows about arguably better than anyone is how to build a team to win an All-Ireland. He has had a chance to look at his charges in training this past month or so and will test them out in the McGrath Cup when they start out against Limerick in Austin Stack Park in early January.

It doesn’t take a rocket scientists to realize that Kerry are missing one or two standout defenders like the O Se brothers from yesteryear. They could also do with finding a younger version of David Moran at midfield. In most counties you could say good players don’t grow on trees, but Kerry is an exception and no doubt with Austin Stacks coming through in their county championship, one or two good players may indeed be recruited.

If so, with the Clifford brothers, Sean O’Shea and Paul Geaney, they have the calibre of forwards who can deliver.

With O’Connor’s pragmatism and experience a vital factor in their corner, Kerry can justifiably feel more entitled to enter the 2022 championship with a better chance of winning that at any time since their last victory eight championships ago against Donegal in 2014.

I think both Dublin and Kerry will feel they have something major to prove in ’22 while it will be hard for Tyrone to maintain their form over such a prolonged campaign while as for Mayo...they always do something surprising but don’t win an All Ireland, do they?

Galway stand in path of 3 in row

The hurling championship feels like it’s in the grip of a team who are here for at least another few years. Limerick have dominated the league and championships so overwhelmingly these past two seasons that it is hard to see who can dismantle them.

Brian Cody has already spoiled them of achieving much more with his semi-final defeat in 2019 – but for that they could now be going for four-in-a-row. However, the calibre of hurler in Kilkenny is not what it used to be and while Eoin Cody looks like he might be the new TJ Reid or Henry Shefflin in time, the problem for his manager is that the black and amber crops of young hurlers are not as plentiful as they were in the early noughties when Kilkenny were quarrying out new degrees of hurling excellence.

It may be that in the end if John Kiely’s dominance with Limerick is to be halted, it will be King Henry who does it with his new pack in Galway.

A proven winner on the pitch, he followed up with a successful stint as Ballyhale Shamrocks manager by winning the All-Ireland club championship.

His arrival in Galway has caused a massive interest among players and supporters and with his know-how, there is a belief that he can transform the nearly men of the last five years back into the winners they were in 2017.

Waterford and Tipperary will cause ripples along the way but neither seem to have the ability to turn that tide into an unstoppable tsunami while Cork are stuck in the loser’s corner more than they would have wished.

Clare have stalled after winning their All Ireland under Davy while Dublin have gone backwards too leaving no one really to attack the Treaty dominance unless the Tribesmen manage to do it.