Home Opinion ADAMS: Tom Hartley's a Man for a Tune 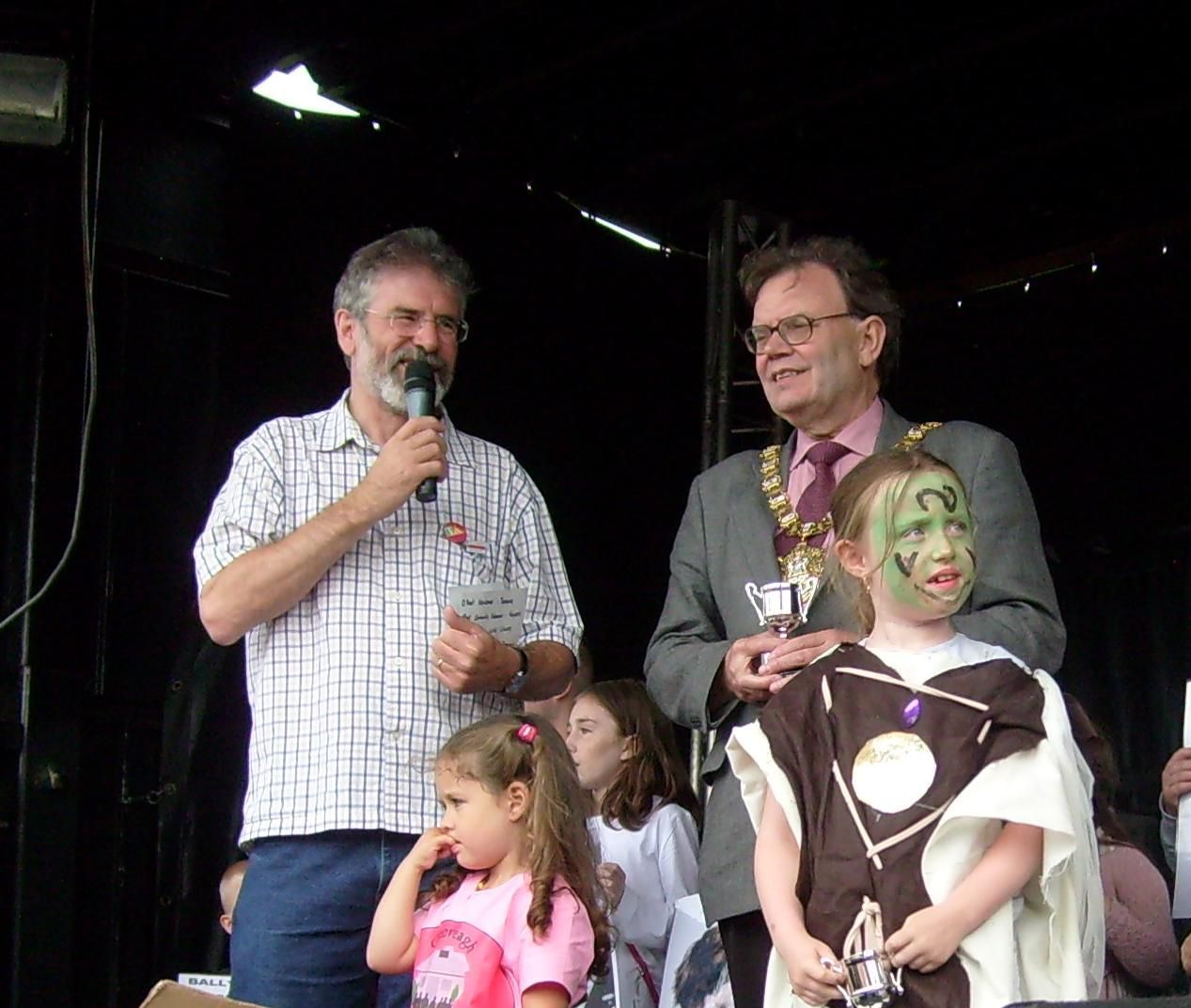 Sharing a stage and a song with Tom Hartley.

ADAMS: Tom Hartley's a Man for a Tune

Our old pal Tom Hartley is a fine singer. He and I have been known to duet together. Back in the day, in C Wing in Belfast Prison on the Crumlin Road, his dulcet tones echoed around the landings like a bird in flight while my rich baritone kept close harmony.

Our sonorous grace notes soared and dipped in perfect tune. Even now, decades later, men locked in the loneliness of their cells at that time, and recalling nowadays how they were transfixed by the magical quality of our voices, will shed a tear at this musical  memory. I even remember prison officers being moved by these moments. Tom always said he couldn’t abide mediocrity.

And that certainly is the case as far as his singing was concerned. The Creggan White Hare bounded freely along the prison landings. To be followed by the poignant tale of Sliabh Gallion Braes. For a few liberating minutes we were all free from the melancholy of the Crum and transported by the strength and melodiousness of song into another place. That’s where the Blues come from. From the slave plantations and prisons. From the chain gangs. Or in our case, the latrines in C Wing.

Tom’s musical roots go deep. A pioneer - though not of the abstemious kind  - of music sessions and  a traveler to fleadhs when the best seisuns were on the Monday or Tuesday after the visitors had gone home. Tom is steeped in ceol. That was the sixties. Away back in 1969 and behind the barricades I recall he and I and some friends sharing the new recording of O Riada Sa Gaiety. We were in Tom McGoldrick’s mother’s parlor and we were all enthralled by this new confident presentation of traditional music. Here was our music rom the backrooms and kitchens and halting sites or the corners of fair grounds or entrances to GAA pitches.

Two recent RTE programs  brought all this back to me. "Cosc - Seven Drunken Nights the story of how the Dubliners got on to Top of The Pops," and "The Flourishing," which is a wonderful televisual journey back into those days of our folk revival.

Seven Drunken Nights was an English language version of Peigín agus Peadar recorded by traditional singer Seosamh Ó hÉanaigh years earlier and given by him to Ronnie Drew in O’Donoghue’s pub one night. When The Dubliners released Seven Drunken Nights as a single it battled its way into the English charts in 1967 along with The Beatles, The Rolling Stones, Jimi Hendrix  and the Kinks.

Back in Dublin, RTE banned them from the airwaves because the song is about an unfaithful wife. Too sexually explicit for the "national" - mar dhea - broadcaster. When news of this broke the song went immediately to Number One in the Irish charts. The people approved.

Seosamh Ó hÉanaigh wistfully remarked that his Peigín agus Peadar was never banned. It continued to be heard on the airwaves. Apparently without offending anyone.

The Flourishing reflects on the emergence of our music from the underground into the foreground and mainstream in the sixties and seventies. It is a terrific documentary.

It reminded me that traditional music was sustained by families steeped in the tradition, including the Traveller Community who deserve great credit for keeping our song and music alive. Comhaltas Ceoltóiri Éireann also deserve great credit. And the people of the Gaeltacht communities. So too, our exiled children in America. Following the shameful disappointment of the post revolutionary period and the awfulness and savagery of the civil war and the enforcement of partition the mass exodus of Irish people included musicians from all parts of our island, many with their own styles and local sets. Some of the more prominent of them recorded these tunes.

Others recorded nationalistic or republican songs. They included The Clancy Brothers and Tommy Makem. Slowly these recordings travelled back home. The 50th Anniversary of the 1916 Rising saw them increase in popularity and the emergence of ballad seasons and ballad groups.

The traditional music revival took a huge leap forward with Seán Ó Riada’ s musical soundtrack for Mise Éire, George  Morrison’s film about the 1916 Rising. O Riada was a musical visionary freed from the neo- colonial cultural amnesia of his time. He was proud of our culture and had the vision and talent to reboot it and bring it to audiences who embraced it also with pride. They included young musicians who stayed true to the tradition while fusing it with their own genius. Pipers, box players, fiddlers, fluters, harpers, tin whistlers. Even the humble bodhrán came into its own. And singers in Irish and English. And seán nós dancers.

Our pal Tom was useless at dancing. He still is. Ted is our Michael Flatley. Agus mise fhéin. Not everyone appreciated our singing. Once in Grosvenor Road RUC Barracks the RUC took grave exception to our rendition of The Oul Triangle. I suppose hearing it twenty seven times without pause can be trying. They threw us out.

"We wanted you to sing’ said the Duty Sergeant. ‘But not like that.  Get out of here and give our heads peace."

Tom stood in front of him. Legs apart. Shoulders back. Chest out. He smiled angelically, put his hand up to his ear. He closed his eyes, cocked his head back and turned his face upwards. He beckoned me to join him. As I did he put his other hand on my shoulder. We let our voices ring out.

"A hungry feeling came o’er me stealing. The mice lay squealing in my prison cell …"

Our pal Tom used to make bodhráns. He played them also. I have one of his original drums. He used goatskins. They stunk to the heavens when he was drying them out. Incidentally he got some of the tricks of bodhrán making from an old man in Sandy Row who also made Lambeg drums. Music unites us all.

So there you have it. Let the music keep your spirits high.

I had the honor and pleasure of meeting Desmond Tutu over the years. He was a friend of Ireland and a supporter of the Irish peace process. He was a remarkable, compassionate and inspirational human being. He never compromised on his belief in the essential goodness of people, or on the imperative of dialogue as the means of resolving differences.

In Irish there is a saying: “Is ar scáth a chéile a mhaireann na daoine” which translates as: “We all live in each other’s shadow.” Few people understood the essence of this connectivity between people better than Archbishop Tutu. It was a fundamental part of his religious faith and of his humanity. He worked for a better South Africa and for a better world. As an internationalist he welcomed the solidarity of others for the people of South Africa in their struggle against apartheid.

In 1984, as he travelled to Oslo to receive his Nobel Peace Prize, Archbishop Tutu stopped briefly in London where he met Karen Gearon and Mary Manning, two of the Dunnes Stores strikers who were refusing to handle South African products. He applauded their solidarity. The efforts of the Dunnes Stores’ workers and others eventually forced the Irish government to ban South African goods.

Seven years later, in April 1991, Desmond Tutu was back in Ireland to meet with Anglican Church leaders and to take part in the annual Louisburg famine walk in Mayo. During his visit, Archbishop Tutu commented on efforts at that time to establish a talks process in the North. Drawing from his South African experience Tutu advised: "Let your negotiations be as inclusive as possible. Don’t let any feel they’ve been excluded. Let them be represented by those they regard as their authentic spokespersons, otherwise talks, as we have discovered at home, become an exercise in futility."

The British and Irish governments, and most of the church leaders, ignored his advice and the talks process collapsed. It was another six years before inclusive all-party negotiations commenced in September 1997.

As an internationalist the Archbishop was equally vocal in his opposition to the apartheid policies of the Israeli state and its ill-treatment of the Palestinian people. This aspect of his public work was also largely opposed by many in the political establishments and in the media. They failed to support him on these issues while he was campaigning on them. Yet after his death they praised him for his courage and vision.

The Boycott, Divestment and Sanctions (BDS) movement for Palestinian rights was established in 2005. Archbishop Tutu was among the first to endorse its strategy and efforts. In March 2014, Archbishop Tutu reflected on the role that boycotts and divestment played in encouraging world governments to end their support for the White apartheid regime: “The same issues of inequality and injustice today motivate the divestment movement trying to end Israel's decades-long occupation of Palestinian territory and the unfair and prejudicial treatment of the Palestinian people by the Israeli government ruling over them."

Desmond Tutu’s internationalism, compassion and humanity, also saw him speak out against other forms of injustice and inequality and the threat posed by climate change. Only two months ago he took part in a United Nations campaign against homophobia and transphobia.

The death of Archbishop Tutu has silenced a voice of reason for a kinder, more caring, just and empathetic society. His courage through decades of struggle, his determined support for human rights and especially for the people of Palestine, is a challenge to the international community. I extend my condolences to the people of South Africa, to President Cyril Ramaphosa, and to Archbishop Tutu’s family.