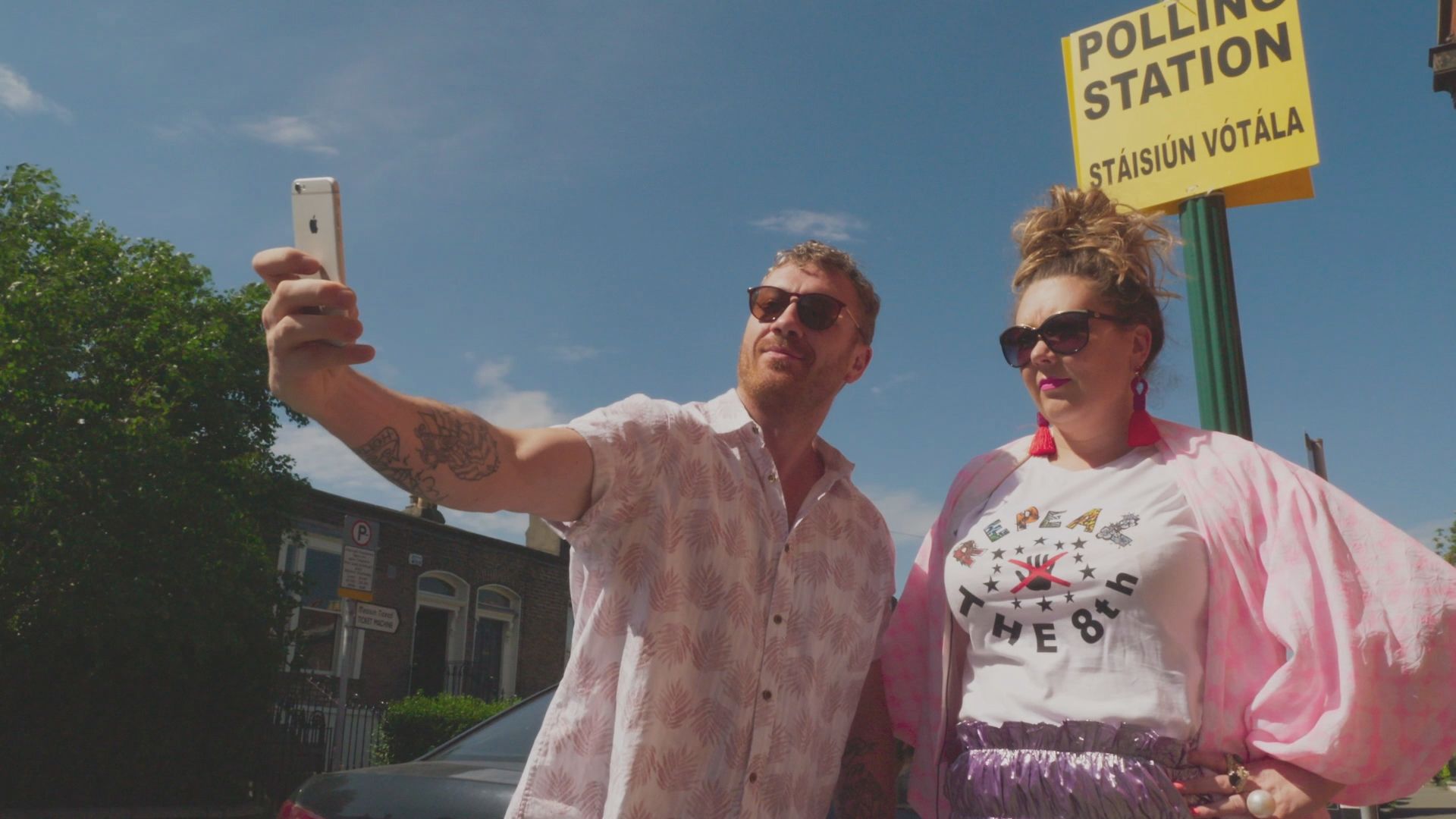 A still from "The 8tth," a documentary that will be shown at the 2022 1st Irish Festival.

The 14th Annual 1st Irish Theatre Festival, which began on Sunday, is showcasing Irish and Irish-American theatre through the end of January with a wide variety of in-person and virtual productions. But as is the case each year with the festival produced by the New York-based Origin Theatre Company, there are a number of film screenings and other special events on the 2022 program.

In the film category is “The 8th” — a documentary co-directed and produced by Aideen Kane, Lucy Kennedy, Maeve O’Boyle, with producer Alan Maher.  Released in Ireland and the UK in May 2021. Artfully telling both sides of the battle to repeal 8th Amendment outlawing abortion in Ireland in 2018, “The 8th” captures the human drama and deep emotions on both sides though it chiefly follows veteran campaigner Ailbhe Smyth and the self-described glitter activist Andrea Horan as they chart a bold strategy of grassroots activism and engineer the near-impossible.  “The 8th” shows a country “ushering in a new Ireland, breaking the thrall of the Catholic church.”

The live events category includes “Bloody Sunday: Scenes from the Saville Enquiry,” a reading of a play based on direct testimony, marking the 50th anniversary of this seismic turning point in the history of Northern Ireland.  On Sunday Jan. 30, 1972, 13 civil rights marchers were shot dead, and another 13 wounded by British soldiers during a peaceful anti-internment march in Derry, Northern Ireland. The Saville Inquiry was set up as part of the Northern Ireland Peace Process in 1998, hearing evidence from over 1,000 witnesses and participants, and lasting until 2004. The New York-based Irish actor Ciaran Byrne directs and produces the reading of Richard Norton-Taylor’s play, in its first public performance in the U.S., with a star-studded cast.  (It was originally produced by London’s Tricycle Theatre in 2005, and the touring production was staged memorably at the Abbey Theatre, Ireland’s national theatre, also in 2005).

For the sixth year almost in a row, Origin 1st Irish will stage on Friday, Jan. 21, at 7 p.m. a part of “Scór on Broadway,” a unique community cross-over event in which members of New York’s Irish diaspora -- of all ages and backgrounds -- come together to showcase their unique skills and accomplishments in the arts. The fun-filled and enriching show, produced by Jane McCarter O’Dowd, takes place once again, as it has in recent years, at Symphony Space.

The Irish American Writers and Artists will dedicate a special Irish-language salon as part of the festival. “IAWA 1st Irish Salon” is produced by Maria Deasy, the organization’s president.

“What Happened After #WakingTheFeminists?”  This Zoom panel talk, moderated by the theatre artist and acclaimed director Nicola Murphy, will bring together a mix of female and male perspectives on the grassroots movement, which started in November 2015, and set out to advance women’s equality in Irish theatre.  Five years after the #WakingTheFeminists campaign launched, subsequently capturing world-wide attention, we ask, “what has changed, and what hasn’t?”

The 14th Annual 1st Irish Festival is curated by Sarah Street, a native of Cork. She is a a member of the Irish Rep, as well as the Barrow Group, and is a co-founder of the Pond Theatre Company.  Michael Mellamphy, who is also from Cork, took over in 2021 from founder George Heslin as artistic director of the Origin Theatre Group, which produces the festival.

For details of tickets and times of festival happenings, go to origintheatre.org.