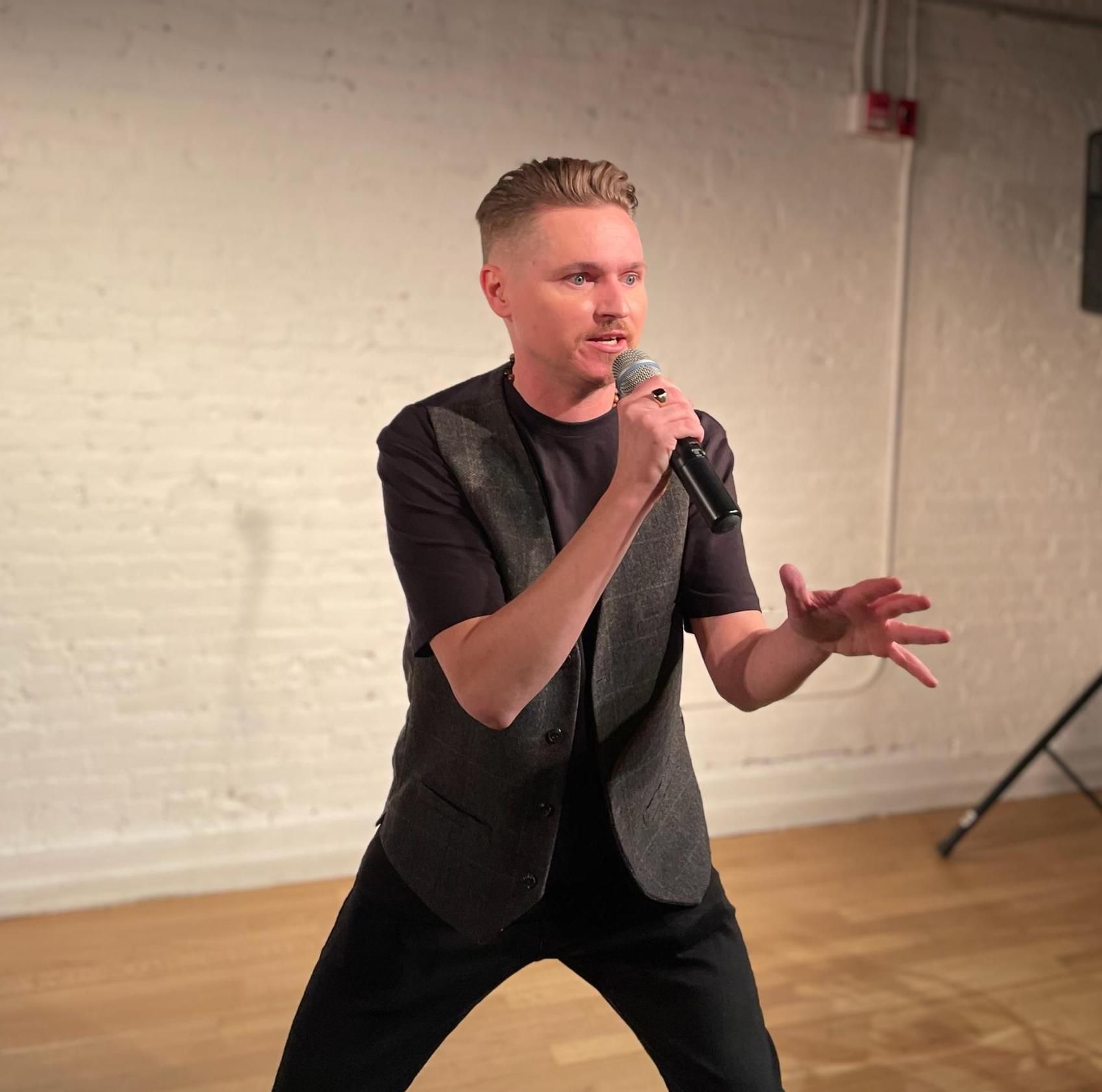 David Gilna in his solo show “A Bolt From D’Blue."

The Origin Theatre Company’s annual 1st Irish Festival, now in its 14th year, has proven once again the resilience of artists to endure against the odds, to bridge all distances and divides, and to give us hope in times of our worst adversity. The 2022 festival, smartly curated by Sarah Street with Origin artistic director Michael Mellamphy, combines performances on stage and on screen alike, with messages both of challenge and tragedy, and of unity and strength.

We are lucky to have digital and live theatre options at this year’s festival, as it gives us patrons the best of both worlds. With health hazards and restrictions in New York and Ireland still certainly intact, we may still freely show our support for the arts, in person and in spirit.

The first of which, dearly-arrived back from Ireland, was beloved entertainer Des Bishop presenting his newest comic monologue “Mia Mamma,” performed at various venues city-wide, and concluding this past Saturday at Arlene’s Grocery on Manhattan’s Lower East Side. “Mia Mamma,” a show remembering the life of his mother, Eilleen Bishop, explores the contending and consoling of the loss of one’s parents, and grappling with that grief, all with a beautiful humor that an Irish family understands so well. A master showman, Des Bishop delivered a eulogy of love and laughs everlasting. It was truly moving for Bishop to share his journey with us, which all of us shared, as the performance felt in away like the wake for all the loved ones of this jam-packed audience, with Bishop being the rowdy and sincere emcee we always needed.

Festival performances of “Mia Mamma,” intended as a preview of sorts, will receive its official debut back at home in Ireland. We wish him the best of luck, and he will surely be missed from New York.

Journeying to New York to perform live as well, from County Dublin, was playwright and actor David Gilna with his solo show “A Bolt From D’Blue,” which made its American premiere Saturday evening at the New York Irish Center in Long Island City. Exquisitely uplifting, jolting and hysterical, “A Bolt From D’Blue” recites the real-life story of a surreal moment in Gilna’s life when he was struck by lightning in South Boston in 2004, sending him in motion on a life of gratitude, empathy, ambition, and an unyielding love for our time in this world.

Meandering from memory, hallucination, music and monologue, Gilna let not a static second fly by; and with writing of blunt, craggy street talk, ornamented with divine, dreamlike prose (“Serpents, mystical creatures, skinning me alive with glee”), Gilna’s monologue matched equally the ferocity of fellow Dubliners Mark O’Rowe and Dylan Coburn Gray. With his cheeky Northside timbre and a joie de vivre of “wilde” abandon, Gilna’s sole performance in New York was an irresistible joy to see. Glowing with wit and goodness, he charmed the crowd with rollicking laughter, and made us believe in a vision of life on the other side of trauma. The thunderous applause at his standing ovation showed Gilna's "A Bolt From D'Blue" was an emphatic victory on the evening, and we'll look for more performances from him to follow.

Lastly, from the virtual stage, this past Sunday saw the finale of Dublin-based theatre company Fishamble’s week-long run of “Duck Duck Goose,” written by Caitríona Daly and directed by Jim Culleton, an incendiary social drama surrounding the crisis of sexual assault in the Age of Information. When a young Galway woman Jane (Caitríona Ennis) accuses friends of Chris (Aidan Moriarty) of rape allegations, divisions are drawn between men, women, family and friends, and loyalties splinter in not so tidy ways. As passions and perceptions over the upcoming trial flare, get recorded on camera as “evidence” and go viral on social media, judgments are passed about gender, with consequences that far outreach the courtroom. When the question is posed to Chris, “I want to know how you just know?” the truth begins to grey, and facts Chris are sure of become called into doubt.

The cast of “Duck Duck Goose” could not have more spot on to their roles. Every member of this ensemble brought a complicated honesty to their character in a way that honored the severity of the story. Each scene—though broadcast from in a digital theatre—had me on the edge of my real seat. Paul Keogan’s provocative set of smartphone walls and rearranging boxes of legal files left one with the foreboding reminder that the eyes and iPhones of the world are always watching. Playwright Caitríona Daly’s writing is a controversial tinderbox of truth, and so succinctly delves into the uncomfortable details of motive, misogyny, mental illness, social media’s sway of public opinion, and technology’s capacity to reveal the truth as much as much manipulate; showing ourselves the truth we want to see.

Last week’s round of theatre were enlivening and inspirational, and I greatly anticipate this week’s upcoming shows, namely Cork theatre company The Everyman’s digital performance of “City,” and Wexford Arts Centre’s “One Voice Festival: Tales From the Quay,” among many more. The 1st is off to a grand beginning in a brave new year.

For tickets and schedule, visit origintheatre.org