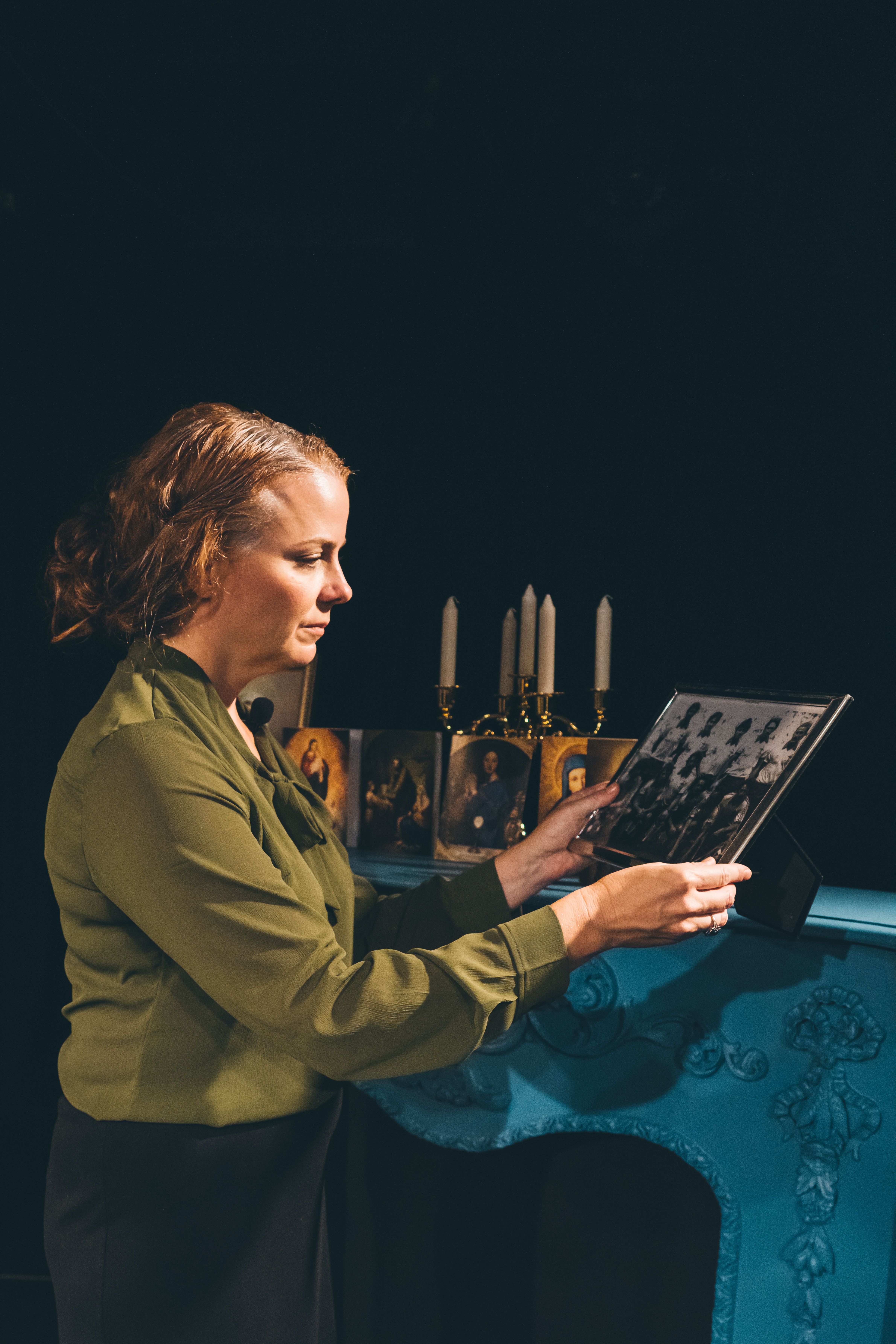 Kirsten Quinn in “The Holy Ground.” PHOTO BY TONY KRUTH

Sexism, silence are laid to rest

A resurrection of rare relevance had returned to the digital stage for the five days through this past Sunday, as the Irish Heritage Theatre streamed its online revival of Dermot Bolger’s “The Holy Ground” with a decisively, timely hit. The Philadelphia-based theatre company, which filmed the production at the Plays and Players Theatre—to a cast of one, and an audience of none—presented an equally-isolated audience in 2021 with more wide-reaching connotations, potent political commentary, and existential contentions than the 1990 one-act drama was sure to anticipate.

Dermot Bolger pictured in 1992, two years after “The Holy Ground” was first produced.

“The Holy Ground” laments the life of a newly widowed woman, Monica, who lives the better half of her life “on her knees,” in service of husband Myles “Swifty Hurley” O’Myrtle, and of a 20th century Ireland rife with religious conservativism that cradled fragile, post-colonial masculinity at the sacrifice of women’s worth. Set in a stifling (semi-detached, one poetically imagines) dour Drumcondra house of mid-1980s Dublin, the play eulogizes a drab era of Irish history, rigid and repressive, overwhelming dominated by the Catholic ethos and patriarchic aggression that had left many women feeling abandoned, discarded, betrayed and bitter. It’s a monologue of historic regret, after a lifetime of a devotion acquiescence and loyalty to the wrong man, society and ideals.

Yet this particular production, starring Kirsten Quinn and directed by Peggy Mecham, capitalized and tapped into a moment, and format, in which its performance is perceived in levels of visceral subtlety that were as uniquely poignant as they were clever.

The set design, a sparse semi-circle of Monica’s living room consisting of shabby props makes the stage feel too empty, irrelevant, and to borrow Monica’s quip, “calculated down to the last shilling.” However, in a coronavirus-context, the very things that would appear under-budget in any other time, have brought a deliberate, deeper connection to a contemporary audience already familiar, attuned and sensitive to emptiness. In the shabby, minimalist set, one feels a lack of fulfillment, of closeness and worth, just as Monica lacks the very same meaning.

Theatre takes on a meta tone in a myriad of ways for the pandemic audience in this rendition of “The Holy Ground.” Whether it’s in the moments when we watch Monica watch TV because she seeks comfort in hearing another voice, or in remarking how, after years without entertaining company at her house, confesses “I’d forgotten how to carry on a conversation?!” one laughs along in the peculiarly collective way of knowing the feeling all too well. Even as Monica confesses, to some humiliation, her habit of talking to herself all these years in her childless and unhappy marriage, as well as the monologue to her dead husband itself—speaking to an empty chair in an empty theatre, one feels an innate, forgone compassion, especially now, in a time in which many of us have known loneliness of many kinds.

What “The Holy Ground” invokes in emptiness, it does not, however submit to in silence. The feminine voice reigns over the play, and is it this quality of Bolger’s writing that makes this production the veritable victory that it is. In the absence of boisterous virility on stage, in the intimate silence of this production, one woman, uninterrupted, speaks her mind.

In the role of Monica, Kirsten Quinn was heartbreaking and pure. Her voice was hesitant, self-doubting, shaky, and unsure; the voice of a woman at once having her chance to be heard. It was at every moment authentic, spoken with a soft resentment, romance, shame and love that was every bit as condemning as it was redeeming of her man.

We cry with condolence along with Monica as she cries “He was made for this life as much as I was. That longing we both shared but we could never speak of...” We laugh with irony along with her, as she recants exasperatedly that, after attempting to kill Myles with rat poison, she is told it would have prolonged his life; a joke made more comical by the modern lexicon that not even toxins can kill toxic masculinity. And yet, despite the inflections of cruelty from the voices in her memory (both Myles’s and others), it was her Monica’s voice that remains, constant, prevalent, and supreme. After decades of silence, she has the last word.

At such a historic precipice as this, in which so many individuals have found courage to break the silence and speak out against sexism, substantially doing so online, this production of “The Holy Ground” could not be a more opportune farewell vigil to lay a noxious masculinity in its grave.

To view future productions at The Irish Heritage Theatre, or to contact directly for further details, visit https://www.irishheritagetheatre.org/ for their upcoming season.