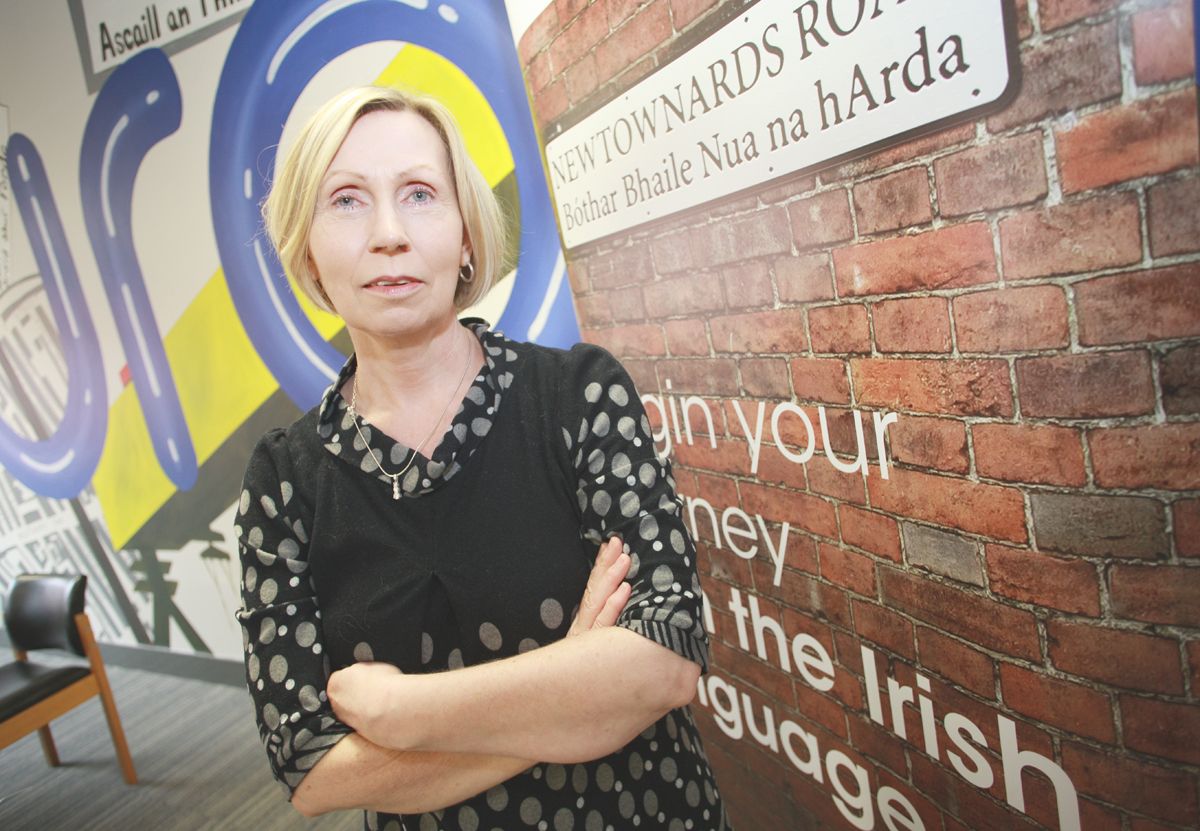 Linda Ervine at the Skainos Building on the Newtownards Road.

The Old Irish word “imramm” comes to mind with regard to Linda Ervine and her endeavors with the Irish language.  Meaning “voyage”, it is used today for a traditional Irish literary genre, which inspired another famous Belfast resident and 20th Century writer, C.S. Lewis, to include "The Voyage of the Dawn Treader" within his "Chronicles of Narnia" series.  Indeed, from East Belfast, and in view of “Samson and Goliath,” the iconic gantries of the Harland & Wolff shipyard which had launched so many imramma, Linda often speaks of her Irish language “journey,” inviting her East Belfast neighbors, and indeed all of us, to travel aboard with her.

In 2011, Linda, a former teacher, well-respected among East Belfast’s Protestant community and from a politically active Unionist family, made news headlines after successfully launching Turas (another Irish word for “journey”)  to teach the Irish she learned though a six-week introduction at the East Belfast Mission and continued studies at An Droichead, "The Bridge" to her adult Protestant and Unionist neighbors.   Enrollment in Turas’ Irish language classes has grown exponentially since then.

Now, she is renowned and widely respected beyond Belfast for teaching all of us that Irish belongs to all who are interested, embrace it, learn it and speak it.

A naíscoil today and hopefully a bunscoil one day.

With her keen sense of history, she learned about the Irish language as it was spoken among her Protestant community throughout Belfast and even by her own family.  “What the Focal?”, a lighthearted short film, based on a script by Linda alludes her own discoveries about the language and its local history.

“Imramh,” the Modern Irish for “imramm,” is also used for “rowing”, enjoyable, but also hard work and Linda is certainly up for the task!

Growing interest and openness to Gaelic sports among the Unionist community saw the establishment of the new East Belfast GAA last year.   Aside from serving as the new club’s first President, Linda Ervine -- whose late brother-in-law David Ervine led the Progressive Unionist Party --  also left her mark on the team’s handsome insignia, inscribed with the Ulster-Scots “Thegither” and Irish “Le chéile” alongside “Together” in English under the H&W gantries, “Samson and Goliath.”

Eventually the new and enthusiastic Irish-speaking community followed the ancient famous imramm of Óisín and Niamh to discover their own “Tír na nÓg” or “Land of Youth,” the dream of a naíscoil, an Irish-language nursery school for their children and those of their Catholic and Nationalist neighbors.   Integrated education has long been seen as a dire need in a society so polarized by sectarianism and a tragic past.

"Naíscoil na Seolta" means “nursery of the sails”, which is a reference to East Belfast's history of ship building.  Under the motto “Páistí sona ag foghlaim le chéile” (“Happy children learning together”), the school will welcome 16 children, Protestants and Catholics together, within a few weeks.

Of course, every imramm includes stormy weather, and the best of them encounter horrible sea monsters!

At the end of May, the East Belfast GAA faced a bomb scare.  Yet, the club continued to grow.

Even worse, Naíscoil na Seolta and its three-year old pupils became the target of a cowardly hate campaign on Facebook.  The new nursery school was threatened with pickets this summer.  Soon, libelous posters appeared around the premises.   Writing for the Sunday World, journalist Hugh Jordan tagged former Red Hand Commando, Charlie Freel, who was incarcerated for bombing a Catholic-owned pub in the 1970s, as the “mastermind” behind the cyber-campaign.

As of this writing, the venue of Freel’s bigoted hatred, the “United Ulsterman group,” with its over 6,000 members, is still hosted on Facebook, which in 2015, was so eager to suspend personal accounts for using Irish and Scottish Gaelic, Native American and drag queen names.

Given the concerning circumstances, the school decided to move. However, under the intrepid leadership of Linda Ervine, the spirit of the teachers, parents and students of Naíscoil na Seolta remains unbroken.

Perhaps, the most famous Irish immram was actually penned in Latin around AD 900, "Navagatio Sancti Brendani Abbatis."  Its hero makes his way from Kerry to a vast continent across the sea in the 6th Century.   Of course, centuries later, countless immrama would follow St. Brendan from Ireland and all over the world.  For the vast majority of us in the United States, our very existence here is a continuous immram, either our own or our families.

As Douglas Hyde did for the Gaelic League and Pádraig Pearse for Scoil Éanna, the voyagers aboard Naíscoil na Seolta also look across the Atlantic at this challenging time, “All are united in their goal of opening the naíscoil doors in September in a temporary location. Longer term, we are fund-raising so that we can secure a safe site of our own, and build the bunscoil ["primary school"] which is our dream. We look forward to making new friends and partners who can help us make this dream a reality.”

Individuals and groups able and willing to help Naíscoil na Seolta can reach them by e-mail, naiscoilnaseolta@outlook.com.   As Máirtín Ó Cadhain had encouraged the young families of Belfast’s Shaw’s Road Gaeltacht in the 1960s, “Ná habair é. Déan é!” – “Don’t say it.  Do it!”