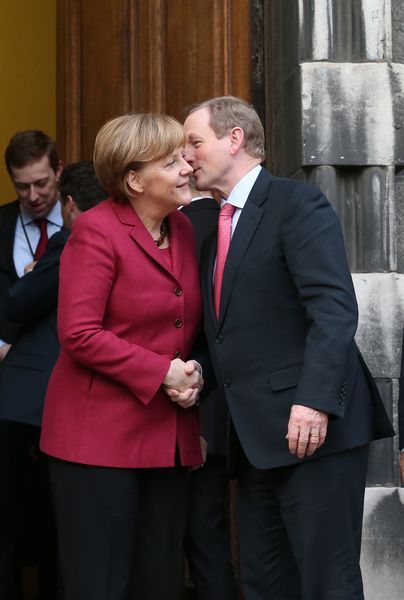 German Chancellor Angela Merkel was greeted by Taoiseach Enda Kenny In March 2014 before she was spoke at Trinity College Dubin on the topic of "Europe in a Globalised World." ROLLING NEWS.IE / SASKO LAZAROV

In an interview with RTÉ News, Kenny said while the Chancellor was motivated by protecting German banks, she had held other EU leaders back who wanted to make the bailout conditional on Ireland raising its corporate tax rate.

He said: "Some of the [EU] partners around that table would have been very quick to make propositions that were simply not acceptable to Ireland in any circumstances. Angela Merkel, as Chancellor, had a restraining role from what some of the others might want to have implemented - and quickly.

"For instance, [during] the first meeting I attended at the European Council, very shortly after having been elected as taoiseach, there was the demand for an increase in Ireland's corporate tax at the time."

Mr Kenny suggested that Ireland's experience of the bailout had heightened Ms Merkel's protective attitude towards the country following the Brexit referendum.

"She among all the other [EU] leaders understood fully what was really important from an Irish perspective and stood by that," Mr Kenny said.

She was really supportive of Ireland, as a country that was an example to others, of how, if you make difficult decisions in the interests of having a thriving economy, of job creation, this can happen. And she would not stand for any hard border. She stood for the full implementation of [the] Good Friday [Agreement]," he said.

Referring to the Irish bailout, Mr Kenny acknowledged that Chancellor Merkel was motivated by the need to support German banks which were exposed to Irish property debt.

"Of course, she was going to have to protect her own position insofar as German and French, [insofar as] German banks were concerned in particular," he said.

Mr Kenny, who has not spoken publicly about his time in office since stepping down in 2017, said the working relationship between former finance minister Michael Noonan and his German counterpart Wolfgang Schäuble was key to how the Irish bailout was managed.

He said that Mr Schäuble effectively granted Ireland a degree of independence in implementing the bailout, because the State was adapting to the strictures of the EU-IMF programme.

"When it came down to us, Schäuble actually said that, you know, the Irish were prepared to take charge of their programme.

Mr Kenny, who was speaking to RTÉ News, said Ms Merkel had made it clear to him that certain flexibilities on the Irish bailout would not be accepted by the German Bundestag.

"She said on many occasions 'this will not go through on a vote in the Bundestag. It's not acceptable.' The constraint upon a German Chancellor is effectively the Bundestag, if they don't accept it," he said.

Mr Kenny said that while Chancellor Merkel had been accused of bringing about the "ruination" of Greece through the bailout programme which she supported, she had intervened at the July 2015 European Council to insist on a third bailout, effectively keeping Greece in the eurozone at the last minute.

"The thing was that at European Council meetings, papers would be circulated, indicating that Greece was on the road to recovery," he said.

"And another couple of billion would put them in the right spot. And then you had a case where three [Greek] elections were fought on the basis of [a promise of] debt reduction, that the national debt would be written off. This was never going to happen.

"I remember the European Council meeting where she was really strident, in saying that we do not want this to fracture and break up now. And so, a third bailout, instead of a temporary expulsion, was what happened in terms of Greece."

Mr Kenny confirmed that after the Brexit referendum, he had drawn a map of Ireland for Ms Merkel, marking out the dozens of minor road crossings over the Irish border, in order to illustrate the risks that Brexit posed to the peace process.

"She herself having been reared in East Germany and understanding what that border was, which was a fence all the way to the North Sea, she was really interested in the looseness of the situation here, where there wasn't a defined fence line, or a border obstruction, between the Republic and Northern Ireland," he said.